The MX-5 changes and still stays the same, much to our delight. When it was born, it weighed 955 kg. A beautiful baby. Over the generations, its parents have taken great care not to overfeed it, in fact today the basic soft-top Miata weighs exactly the same as at birth (the scale can read up to 1,170 kg depending on the model and options).

In an age when every other model that was on the road 20 or 30 years ago has become heavier over time, that's quite a feat. But it didn’t just happen by chance.

Since then, the Hiroshima-based automaker has never deviated from that original formula. 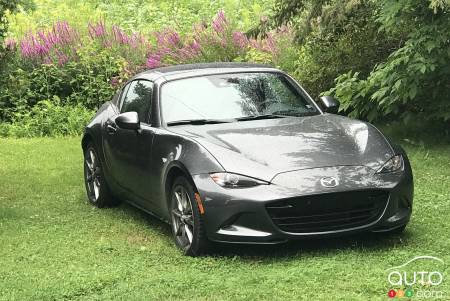 Symbiosis
The MX-5's 50-50 weight distribution between the two axles is something you can feel from the very first turns of the wheel. This beautiful balance settles under your buttocks and never leaves you. You feel at one with the machine, like a surfer standing comfortably balanced on their board in the middle of the waves.

The Japanese love images and symbols, as evidenced by their passion for manga, and Mazda has settled on an expression that embraces the concept behind the creation of the MX-5: Jinba ittai. This roughly translates to “individual and horse as one”.

In a traditional Yabusame event, an archer aims at a target while galloping at high speed. They are able to make this shot because they and their horse are in harmony. A touch of the heel, an imperceptible squeeze of the thighs and the horse understands the rider's command. It’s a  beautiful analogy that fits the MX-5 like a glove.

I drive it and I'm in complete control; the slightest impulse I give to the steering is quickly responded to. It's impossible to escape the bumps on our roads, of course, but the short wheelbase, the rigidity of the structure and the right balance of weight mean that you roll with the imperfections instead of fighting against them. And if you do happen to get a little airborne, everyone takes off together and everyone lands on their feet like a cat.

I know this because I keep going over and over the two railroad tracks that cross the road leading to my house. Not one - two! With any other vehicle, it is strongly advised to brake before passing over these mounds, especially since one of them looks like it was conceived by a Six Flags ride designer. 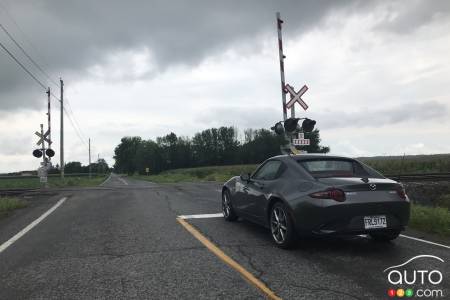 In the MX-5, though, I go for it! The convertible follows the shape of the better-paved track like silicone around the kitchen sink. On the other track, designed in the form of a lunar crater, the Miata and I bounce cross it in a grand old mood. Let's do it again!

Now, I'm not saying that it doesn't shake, rattle and roll. On the contrary! Drive the MX-5 on a road that’s crookeder than a snake-oil salesman’s smile, and your vertebrae clack together like castanets; your dentures, if you don’t keep your mouth closed, may wind up on the floor.

But in those instances, you don’t suffer alone; you suffer with the car. I think of that 2004 Viggo Mortensen movie, in which he participates with Hidalgo (titular horse of the film) in a 5,000 km race in an Arabian desert. Horse and rider are one throughout the event. Jinba ittai. When the MX-5 scrambles, swerves, jumps, shakes, shuffles and kneads, you stay together and stay in control because you stand together.

For once, a sales slogan doesn't lie... 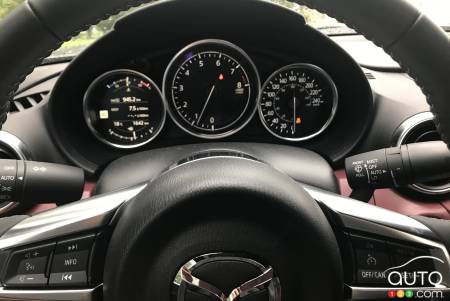 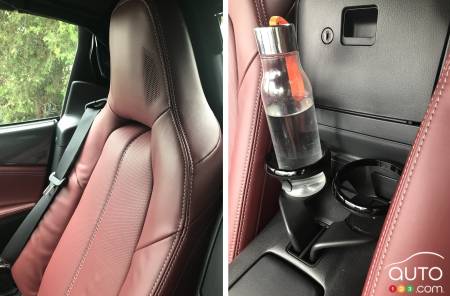 Propulsion and nothing else
I'm not an expert on drifting, but those who are say that the MX-5 allows them to practice their art to the fullest. The rear-wheel drive attributed to the two-seater combines with the perfectly distributed weight, low ground clearance and pocket size to make it easy to execute clever slides. I’m told.

For less adventurous riders like me and like most of us, the MX-5's incisive personality can be explored without the need for such tricks. For starters, you only need to knit the gear lever of the 6-speed manual transmission to experience that too-rare sensation of being not just a motorist, but a “driver”. It’s a sensation halfway between satisfaction and bliss.

For one thing, the placement of the short lever is perfect. Where your forearm rests on the centre console, where the palm naturally rests, the knob is right there, waiting for you. For another, the shifts of the six gears are tight, very tight. Tac-tac-tac. You need rhythm and regularity. The gears are so close together that if you push too hard, you end up in the wrong one. 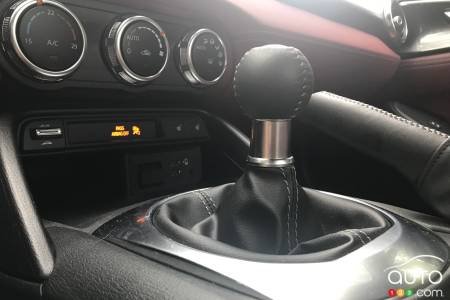 Mazda also offers a 6-speed automatic transmission with paddle shifters for fingertip shifting fun. Not only does it do a great job, it doesn't cost anything extra if you choose it instead of the manual. An argument that seems to be seductive since Chuck Reimer, head of product communications at Mazda Canada, told me that almost 70 percent of Quebecers who have bought an MX-5 so far in 2021 went for the automatic (it was 65 percent in 2020).

These figures surprise me, I confess. Is the art of shifting gears by hand being lost? Does driving a Miata mean taking it easy with the sun on your neck?

For my part, just as I can't imagine a Margarita without tequila, a Santa Claus without a beard, and the Habs without Carey Price, I can't separate the Miata from its extraordinary manual transmission. 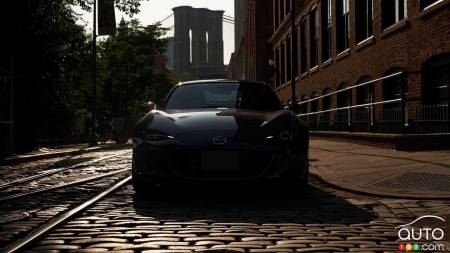