Things you want to know before we bid the Miata adieu Automotive columnist: Michel Crépault , Updated: 2021-09-10

Auto123 puts the 2021 Mazda MX-5 through its paces in a long-term review. Today, part 5 of 5, in which we dawdle on a few things you want to know before we bid this Miata adieu.

For this last chapter of our long-term review of the Mazda MX-5 RF (driven for one month) and the MX-5 soft top (also driven for a month), allow me to share a mishmash of thoughts that I had not yet shared prior to now.

Intimate quarters
For example, I have already explained the “Jinba ittai” philosophy behind the construction of the world's most popular convertible, by which the driver and the car become one. I would like to point out that the interior of the car also contributes to this feeling of togetherness. Extreme togetherness.

To give you an idea of how cramped the cockpit is, while sitting in the very nice Recaro seat (part of the $4,400 Sport Package that also includes 17-inch BBS wheels with red calipers and Brembo brakes up front), you only have to extend your right arm to reach the other door. Without dislocating your shoulder. It's rare to find a car that allows such intimacy with its surroundings. Or with your fellow passenger.

For that matter, does the Miata even want a passenger? 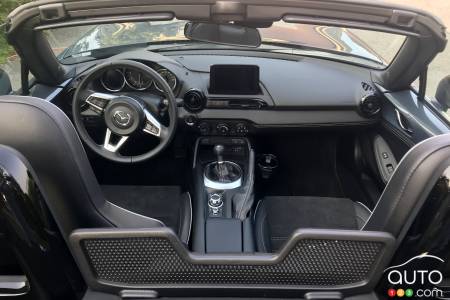 If you use your roadster primarily for Sunday drives in a pastoral setting, the answer is yes. Your guest will be happy to share those therapeutic outdoor trips with you.

But if instead of cruising peacefully between farm silos you're aggressively slaloming with the 2.0L SkyActiv churning at over 4,000 RPM, as if the poor thing would run out of oxygen below that, it's doubtful that your passenger will continue to find the ride so charming.

While you're having a blast behind the wheel, thinking that the last time you felt such a symbiosis with the road was on a go-kart track, the poor soul next to you will be wondering what kind of crazy they were to agree to accompany you. You might catch them crossing themselves, an instant convert to the faith. The stubborn atheist might blaspheme, directed at you. 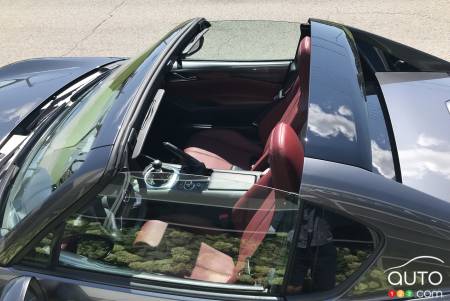 A toothbrush and…
Here's another argument in favour of traveling solo: luggage space.

Or rather, the lack of it. The soft-top MX-5's egg-shaped trunk has a capacity of 130 litres, three less than the RF model with retractable metal roof. It doesn't get much tighter than that in the industry. The BMW Z4's trunk offers 281 litres. The Porsche 718 Boxster's trunk offers only 120 litres in the back, but it makes up for that in the front with another 150 litres of cargo space.

Optimists will see the MX-5 as an enforcer of efficient packing. Take only what you really need. Plus, if your bags are soft and you're good at Tetris, you might find you can fit in a few “luxuries”. Like a change of clothes.

But, yeah: without a passenger, the floor in front of the unoccupied seat is also very practical... 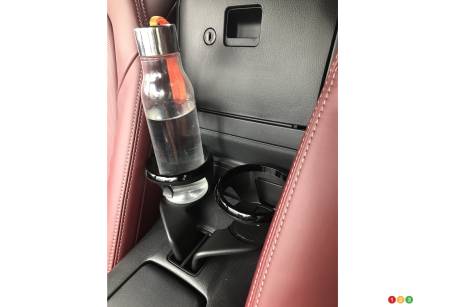 Also, because of the MX-5's remarkable dearth of storage space, you learn to seek out the smallest nooks and crannies where you can store something, anything. Those precious spaces include:

- The tiny compartment on the centre console that doubles as an armrest. Lift the lid and you can hide a set of keys.
- A double cup holder in the back. We've already seen that lifting the lid of the car itself requires a flexible and courageous elbow. To retrieve a water bottle behind you, that’s doubly so. But wait: one of the plastic rings can be removed fromt there and inserted into a slot to the right of the gear selector. So you can quench your thirst without risking a dislocated elbow. But then the passenger might not appreciate having something sticking in their knee. Did we mention there are advantages to traveling alone in a Miata?
- Also in back, a tiny locker, in the wall on which the backrests abut (they don't really recline, which gives the passenger another good reason to stay at home and enjoy a blissful – and much more comfortable - nap). We used it all the time, in the absence of a normal glove compartment, but you have to empty the cup holder to access it.
- Finally, a hollow in the doors. Into it you can fit an old Kleenex, a clementine peel or a chocolate wrapper, but not all three at once.

In short, the MX-5 is a Marie Kondo of a car, here to teach you the art of traveling light. 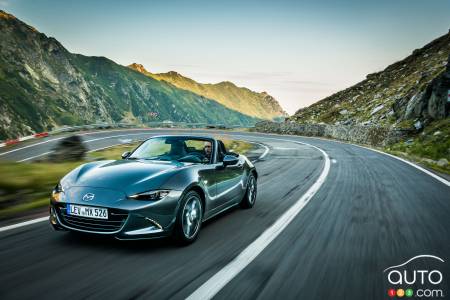 Photo: Mazda
The Mazda MX-5, on the road

Super recommended
Here’s how fuel consumption went during my time with the Miata: depending on the enthusiasm of my right foot, it fluctuated between 7L and 9L/100 km. Moreover, if you want to take full advantage of the available 181 hp and 151 lb-ft of torque, best to feed the 2.0L engine high-octane gas.

Fiata
In this essay about the MX-5, a word about the Fiat 124 Spider is in order. While Mazda was preparing to present the 4th generation of its popular convertible, Fiat was planning an heir to the 124 Sport Spider (1966 to 1985) in the form of a 124 Spider, which would be the fruit of a collaboration between the two manufacturers. We’ve seen this type of partnership elsewhere of course, with the handshake between Subaru and Toyota giving rise to the BRZ and FR-S close cousins.

The plan was simple: the next MX-5 and the 124 would share a platform and use the same dashboard (same dials, same 7-inch touchscreen), but the Fiat would customize its body (and make it 5 inches longer) and use its own engine with the 160-hp 1.4L MultiAir turbo imported from Italy and bolted into place on the Hiroshima production line, alongside the Japanese cousin.

We could go on and on about the reasons for this failure, but in the end, I think people clearly showed their preference for the original formula. 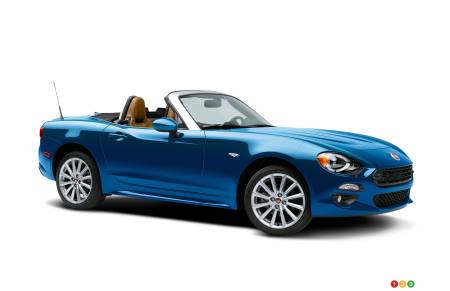 High praise
Finally, I can't leave out this quote from British journalist Jeremy Clarkson, the famous/infamous host of Top Gear and the Grand Tour: “The fact is, if you want a sports car, the MX-5 is perfect. There's nothing on our roads that will give you better value. Nothing that will give you as much fun. The only reason I give it five stars is because I can't give it 14.”

Personally, I was very sad to end this extended test drive. The melancholy was two-fold because the car's return coincided with the end of summer. While rationally I know that the MX-5 is one of the most impractical vehicles in the universe, especially given our unforgiving Canadian winters, my heart loves it because it's a breath of fresh air, a toy for grown-ups, an outlet for stress and a triumph over the dreariness of daily life.

Especially since the 100th anniversary edition - it's the Mazda brand celebrating its centennial, not the model - costing $41,800 (versus $33,200 for a soft-top GS) and based on the GT version of the 2021 MX-5 but made exclusive by virtue of the snow white exterior, garnet red interior, dark cherry soft top and commemorative badges all over the place, is accompanied by a 1:43 scale model of the R360, Mazda's first touring car.

I ask you, how can you resist? 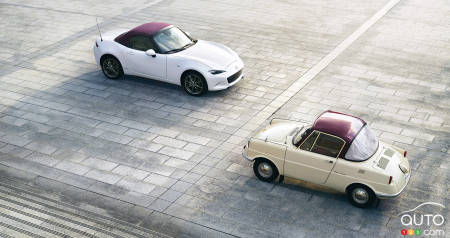 Photo: Mazda
The 100th Anniversary Edition of the Mazda MX-5, and a Mazda R360 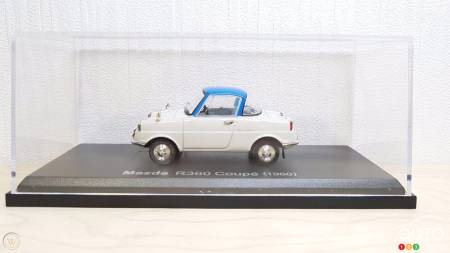