At the time I started writing this, the Montreal Canadiens were about to play their 5th game of the Stanley Cup Final against Tampa Bay. Just hours away from knowing if another miracle might, just might, happen.

The frenzy displayed by the team’s fans came out of a mix of hope, fun and celebration. After a pandemic, what a happy release!

Many fans were too young to have lived through the last conquest in 1993, so they jumped on board with collective joy, hoping to fill up on unforgettable memories.

We now know there was no joy in Mudville in the end, no parade through the streets of Montreal like back in the day. But the emotions generated by this scrappy, underdog hockey team left an indelible impression. Now, not only seniors will be able to tell the story of "I was there when...".

In the same general spirit, who among you remembers Miata-mania? Swing and a... home run!
Travel back with me to 1989. Year in which the Mazda Motor Corporation first presented its new Miata. That was in Chicago in February. Then it took it to Geneva in March. When the first cars arrived at Mazda dealerships in Canada, they were snapped up. Success!

Success? Yep. With no effort, dealers were getting thousands of dollars more than the suggested retail price, and there were stories of buyers turning around and making a killing on a quick resale.

That, my friends, was Miata-mania. The madness of getting a Miata.

Yes, we're talking about the same car, that little two-seater convertible that made Mazda a fortune and a reputation. Old people like me still say Miata; younger folks eventually figure out that uncle is referring to the MX-5.

If you’ll bear with me, I spent a lot of time on the web trying to figure out why these two names co-exist and I wouldn’t want all that effort to go for nought. Plus it’s a worthwhile story, especially since a third name and even a fourth one appear in it.

Once I unravel the suspense for you, parts 2 to 5 of my long-term review will delve into every aspect of this remarkable little car. But before that, you’ll be going to bed tonight that much wiser. I promise! 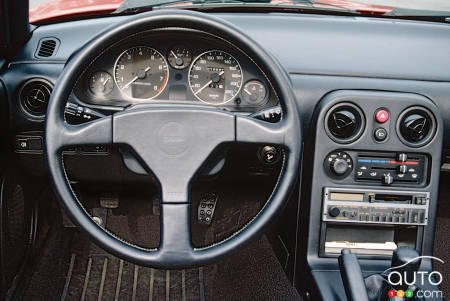 Just like the good old days
The creation story of the Miata starts with a discussion between MotorTrend journalist Bob Hall and a Mazda engineer by the name of Kenichi Yamamoto, who had supervised the development of the famed rotary engine. In this discussion, the former suggested to the latter that the Japanese automaker should produce an affordable roadster, a sporty car like the British used to build.

Kenichi Yamamoto would go on to become president of Mazda, and he didn’t forget the American's idea. In fact he hired him and gave him carte blanche to make the idea a reality. In 1983, a friendly competition began between two Mazda studios, one in California, the other at the Hiroshima headquarters, to design the new model.

The Californians won that contest with its prototype coded Duo 101, so named because the plan was for the roadster, designed with a canvas top, could also be fitted with a hard top that could be stashed away at the back of the garage in the summer and put back on when winter came.

In developing the prototype, the designers borrowed several styling elements from the Lotus Elan, even going so far as to dissect one of them.

In 1989, the fruit of their labor was finally unveiled to the general public. But what name to give it?

This is where it gets complicated.

Here’s what Mazda decided: Global markets, for instance England and New Zealand, got a car called the MX-5. But Americans and Canadians got one called the Miata. And in Japan, Mazda launched the car under the name Eunos Roadster (or Roadster for short).

Now, it's not uncommon for a model to have two names. It’s a useful strategy to differentiate clones. For example, it's not unusual for a Chevrolet Bolt to become an Ampera-e under the Opel banner. However, when the Ford-150 becomes the Ford Lobo (for Wolf) in Mexico, or the Fusion becomes the Mondeo in Europe, several marketing factors come into play.

But MX-5, Miata and Eunos for the same car! Why make life so complicated for everyone? 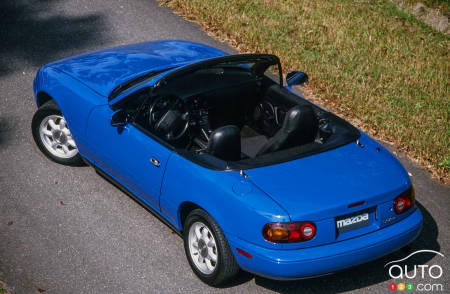 Different times, different customs
These days, alphanumeric names are all the rage in the industry. Marketing gurus have spoken. It’s actually a trend that originated in Europe, and it does have the merit of standardizing names internationally while hierarchizing segments and models. But it’s not to everyone’s liking. Remember the confusion when Infiniti decided to rename all its cars with the Q prefix and QX for its SUVs? Mazda is no stranger to the phenomenon with its CX-30, CX-3, CX-9, etc.

In an earlier time, however, the Japanese preference was for evocative names, and frankly so it was in North America. Probably because we’re such romantics and poets. In any event, this led to the MX-5, as it was known in most countries, getting the Miata name here in North America and in Japan. At least initially.

It turned out that Mazda became afraid of possible confusion in the home market, and probably of a potential legal battle with a Japanese company that was producing a bicycle carrying the name Miyata. In the end, Miata it was to be in North America, but not in Japan. Mazda needed another name there.

If you ask me, they should have invested in a crystal ball, which would have revealed to them the alphanumeric future. They could have saved themselves a lot of bother and just gone with MX-5. But no crystal ball, and no MX-5 for the domestic market. Instead, Mazda chose Eunos Roadster.

The Roadster part is straightforward enough, of course. Or is it? By definition, this term refers to a two-seater convertible and ideally with rear-wheel drive. The name Spider or Spyder is often used as a synonym by manufacturers who want to spice things up with an exotic flavour. Purists have their own opinion, as they’re wont to: in their view, if the convertible is actually derived from a sedan, it's a convertible; but if it's been given a body just for it, it gets the spider/spyder designation.

But what about the Eunos part? 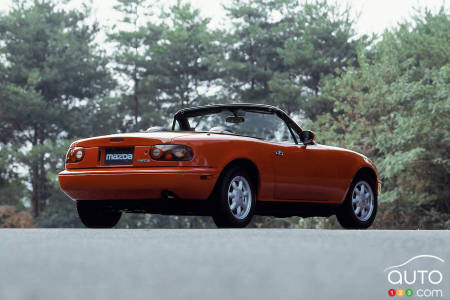 Many good things
First of all, Eunos is a combination of "eu", meaning "good" in ancient Greek, and "nos", the abbreviation of "numbers" in English. In other words, Eunos as in "many good things".

Eunos is also the division that Mazda launched in Japan in 1989, the year our famed roadster was born. The Eunos brand would regroup the Mazda models that focused on driving fun. There were several Eunos including the 100 (our Mazda 323), the 300 (our 626) and the Roadster, aka our Miata.

The Eunos division packed up in the mid-90s. Some of its models shoulda-coulda-woulda found a home with Amati, the high-end division that Mazda considered introducing in North America before changing its mind.

And… the story doesn't end there...

Despite phenomenal sales, Mazda was scalded by macho-istic gripes to the effect that the two-seater was somehow a "hairdresser's car". To virilize the image of the car, and to embrace the trend to alphanumerization, by then well underway, the automaker announced that the Miata would henceforth be called the MX-5 everywhere, period. End of discussion. 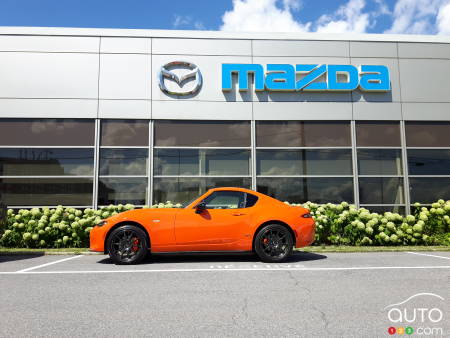 As far as I'm concerned, it's a waste of time. I still call it the Miata. Especially since the word also has a meaning.

No, it's not "Make It A Topless Afternoon" as some joker on a forum run by fans of the roadster swears.

Miata is actually taken from the old German word for "reward".

Meaning, the reward you get from driving a Miata. The gift you give yourself when you buy an MX-5. The gift that will be unwrapped more in my next texts on the Eunos Roadster. 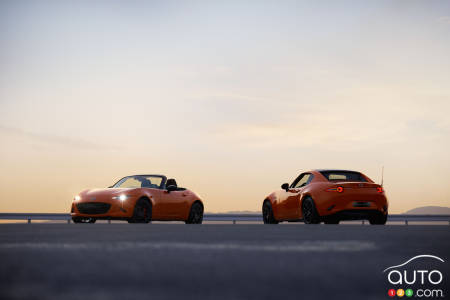