This is a great little EV, but its pricing renders it ineligible for any provincial or federal EV discounts Automotive columnist: Dan Heyman , Updated: 2021-02-23

Recently, we attended a presentation that shed more light on what the Volvo XC40 compact crossover’s switch to electric “Recharge” form meant, and we were intrigued. After all, it’s not every day that a manufacturer takes not just a platform but a whole vehicle and changes it from an internal-combustion vehicle to a fully battery-electric vehicle, but here we are.

The XC40 Recharge is essentially the fully electrified version of Volvo’s popular compact crossover, but aside from the lack of a front grille, some unique wheels and a few badges, you probably wouldn’t be able to tell from looking at it. Still has the great two-tone paintjob, the tall roof and Thor’s Hammer DRLs; all the hallmarks of Volvo’s current design signature are present, and that’s a very good thing.

Inside, the differences are even fewer and farther between, although there is one big difference, one element that is exclusive to the XC40 Recharge, at least for now. That would be the infotainment display. Actually, that’s a bit of a lie; the screen itself is still the 9-inch vertical number that all Volvos get, but what’s displayed on it is a whole other kettle of fish, for the XC40 Recharge is the first Volvo model in which we’re seeing the new Android Automotive infotainment interface. Actually it’s just the second time we’ve seen it in a car of any kind, after it debuted on the Polestar 2 earlier this year.

The interface was developed in partnership with Google, and it essentially allows your car to be turned into your Google device. That means you can access your contacts, playlists, and even gain access to Google Home, and all you have to do is sign in.

But there’s a caveat – for now, at least. As of right now, there is no support for Apple CarPlay or Sirius satellite radio. Now, you can still operate your Apple device through Bluetooth but that’s older than last week’s news at this point. Volvo says that since the OS is capable of over-the-air updates, those apps aren’t too far away and will be included in a future update.

Otherwise, the inside of the XC40 Recharge is pretty much the same as that of any other XC40, so you have digital gauge cluster, some cool 3D-effect faux-aluminum inserts on the dash, optional (and very good) harman-kardon audio, comfortable seats finished in a combination of leather and suede – and a surprising amount of room. 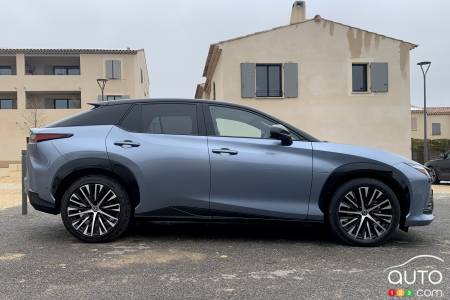 The XC40 has a relatively high roof so even tall folk like myself, and even with the full-length moonroof (which is operated by touch panel in the Recharge, a shame because I’d prefer a traditional switch), have proper headroom both in front and in back. Looking up from your seat, headroom in the XC40 is more generous than its outward appearance would otherwise suggest.

Better still is the fact that not an inch of passenger space has been lost in the transition from gas to EV power. There’s no more underfloor storage in the rear cargo area – they had to fit the 78 kWh battery and dual EV motors in somewhere – but there’s also no engine, meaning what’s typically an engine bay is now an additional storage unit, or “frunk”. As a result, total storage is about the same.

Getting started in the XC40 Recharge is about as simple as it gets. As long as you have the keyfob on you all you have to do is walk up, open the door, strap yourself in and select either drive or reverse, which takes two tugs and two pushes, respectively, of the stubby gear lever (why couldn’t it take just one each way? I don’t know), and you’re off. No start/stop button, no need to plip the keyfob.

Even the trunk takes advantage of all this, as it is foot-activated. It’s actually really nice never having to fumble with a key or start button and since you can pre-set the Recharge’s climate control through an app, getting on your way off has never been so effortless. 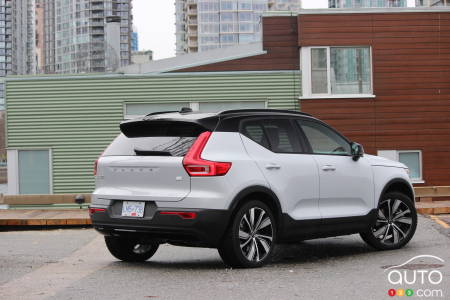 Power is rated at 402 hp and 487 lb-ft of torque – which means that this little all-electric Volvo CUV makes more torque than does the twin-turbo V8-powered Mercedes-Benz AMG GLC 63. Of course, this being an EV you’ll never get that nice, flat torque curve and while the launch is very satisfying, it will run out of puff after a while at speed, but really, does that matter? This is not supposed to be a performance CUV and as long as there’s enough response from the powertrain to make for easy passing on the highway and so forth – and you get that from the XC40 Recharge - then you’re in good shape.

Since that big battery is mounted low in the floor, the centre of gravity is lowered, reducing body roll and making for better handling and a more comfortable ride. On my tester, that ride was firmed up a little thanks to its having the optional 20-inch wheels (19-inch wheels are standard), but for the most part, forward progress is comfortable.

There are no drive modes, aside from an off-road mode which should probably be called “snow” mode because it’s mainly in snowy conditions that it will get used. Other than that, there’s an option to add a little more weight to the steering and that’s about it. You won’t find any “Pure” or “Sport” like you see in the various plug-in Volvos.

There is, however, a “one-pedal” mode which cranks up brake regeneration to 11 so that all you have to do to come to a full stop is release the throttle, and it will keep you there until you accelerate again. The brake-force is quite heavy when you do release the pedal, so you’ll want to make sure that once you deactivate one-pedal mode you remember to move more quickly to the brakes. It’s a good way to get the most out of your charge; Volvo is claiming 335 km of range on a full charge, and the XC40 Recharge is fast-charge capable so you can return 80 percent of a charge from 0 in about 40 minutes. 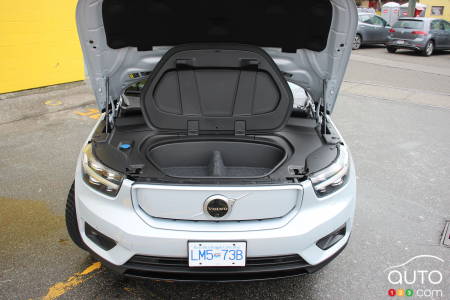 It is a little strange, though, how in all their wisdom, Volvo decided not to include a “kilometres left” indicator until just 25 km remain on the charge; as I understand it, their research has shown this reduces range anxiety, but I’m not so sure. You do get a percentage left indicator, however, and I saw a drop from 90 per cent to 60 per cent after about 65 km driven, and that included some highway driving and some steep climbs.

While the range indicator is one issue, it’s not a big one (I wonder if it could be added with a software update later on), and it’s really not a deal breaker. What’s a little tougher to swallow is the fact that the Recharge costs just over $16,000 more than a similarly-equipped non-EV XC40. That’s a big jump, and it renders the model ineligible for any federal or provincial rebates. That said, I’ve talked to a number of manufacturers that build EVs and PHEVs and they maintain that cash-back incentives aren’t as big of a draw for buyers as one might think. Not to mention that as more and more of these vehicles are delivered, the incentives are likely not going to keep pace forever.

Pricing aside, with the XC40 Recharge, you get a surprisingly spacious compact crossover that looks great, comes well-equipped and gets an EV powertrain that works as advertised. Volvo was one of the first manufacturers to promise full electrification across their lineup in the near future, and the XC40 Recharge is a big first step in that direction. 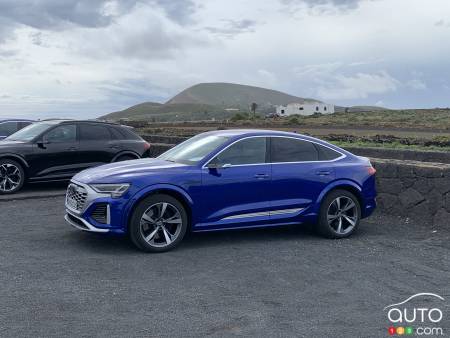 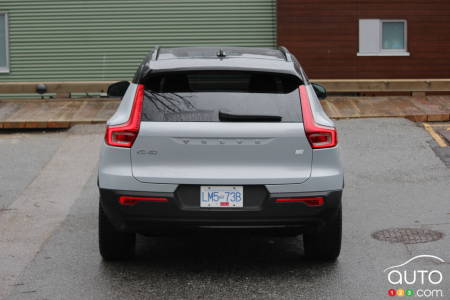 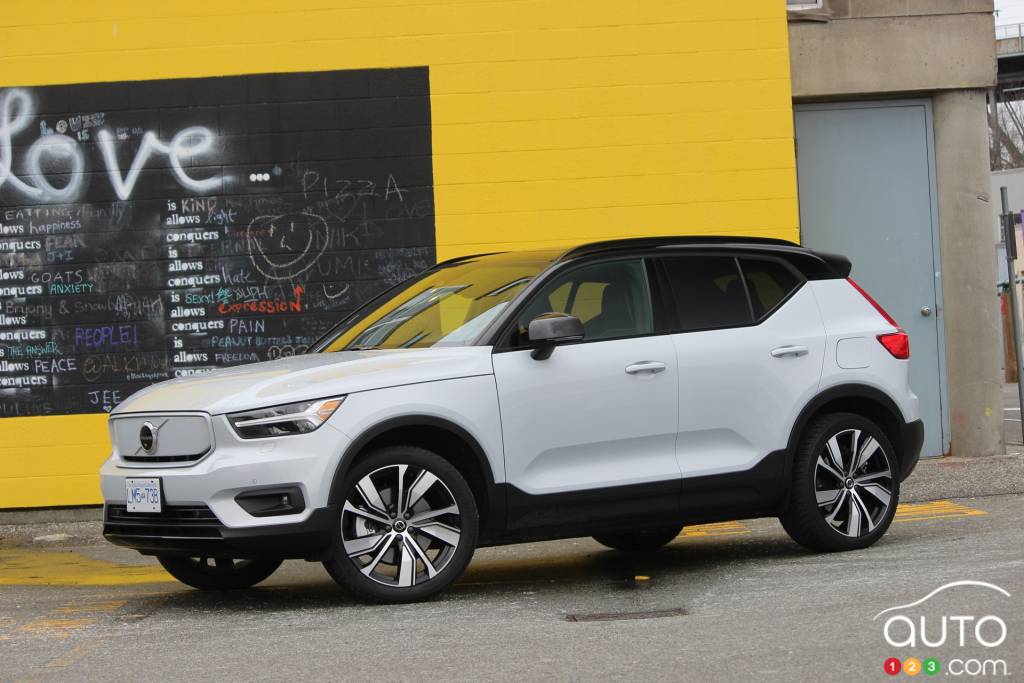 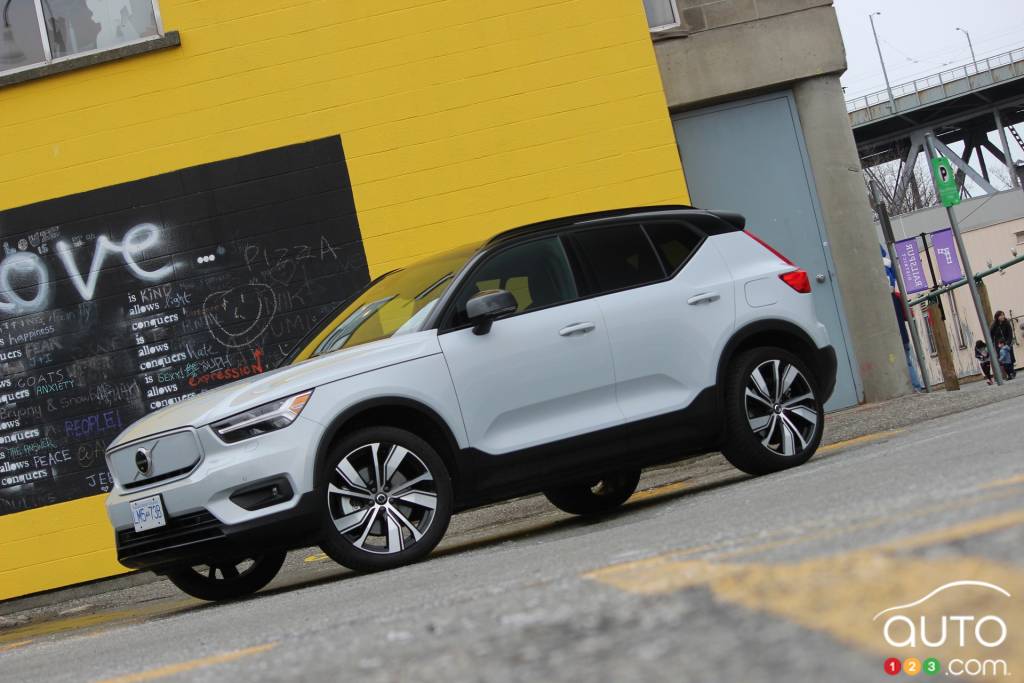 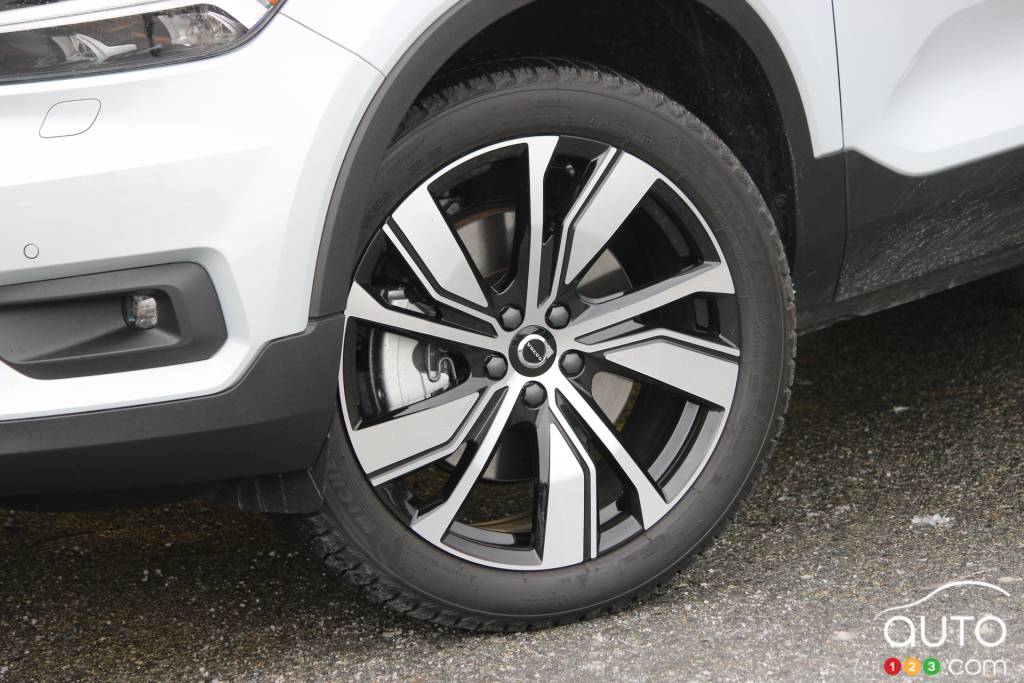 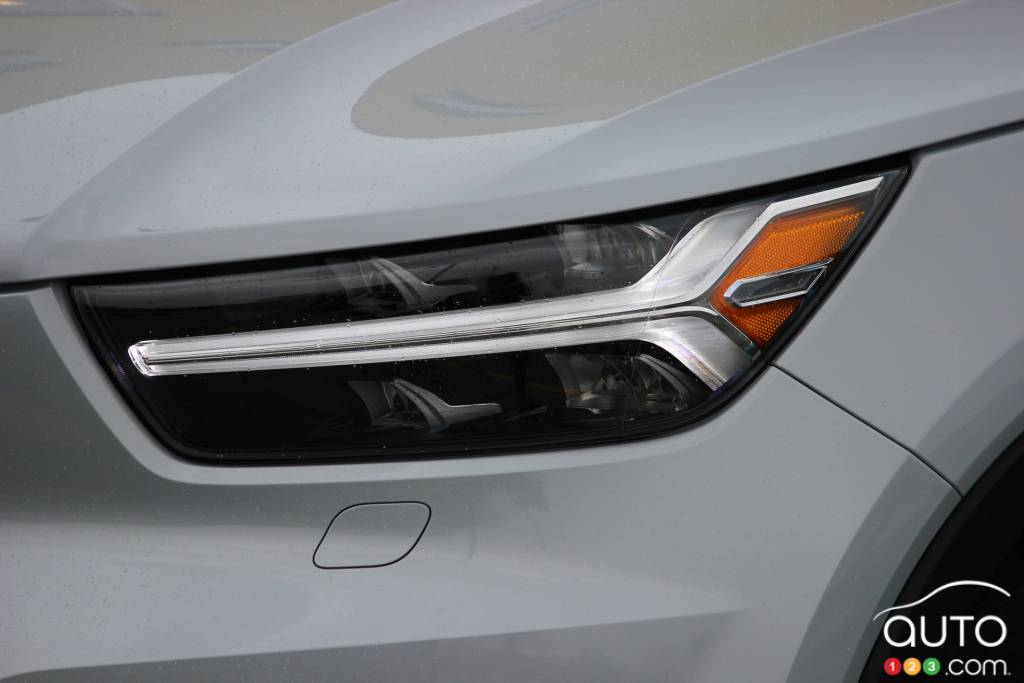 The 2022 Volvo XC40 Recharge is an attractive, powerful and lively little all-electric that will nonetheless have to work overtime to convince buyers it’s wo...

Volvo has presented - virtually - the all-new 2021 XC Recharge, an all-electric small SUV that could instantly upend the premium EV market. Consumers will de...

Volvo Will Debut a Second All-Electric SUV in 2021

Volvo has confirmed it will introduce a second all-electric SUV model in March, and begin production before the end of 2021.