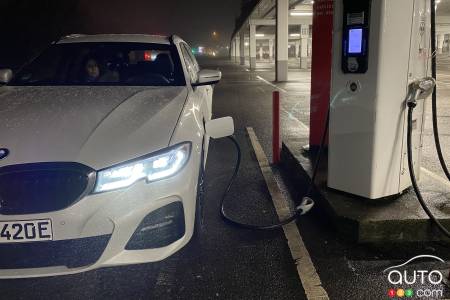 With gas prices going up and down (well mostly up), the idea of an electrified vehicle is an increasingly appealing one. And frankly, the time for wondering about the future of the electric format is over. The future is electric and all manufacturers are on board, now offering one or more electrified variants in their lineups.

While the arrival of electrified vehicles on the market allows motorists to save considerably on the price of gasoline, a new necessity arises out of it: access to a charging terminal. You need to have one at home and if you're going on a long trip you need to plan for frequent recharging along the way.

Knowing this, we decided to hedge our bets and go hybrid for our trip. We made arrangements with BMW Canada to reserve a BMW 330e, which we would take possession of in Germany. BMW immediately accepted the project and even entrusted us with a magnificent 330e Touring as the icing on the cake. As we all know, Europe is a welcoming place for Touring versions, as wagons are considered the ultimate family transport cars. Sure, SUVs are gaining ground, but fortunately (at least in my own view), they're not yet the majority on the Old Continent. 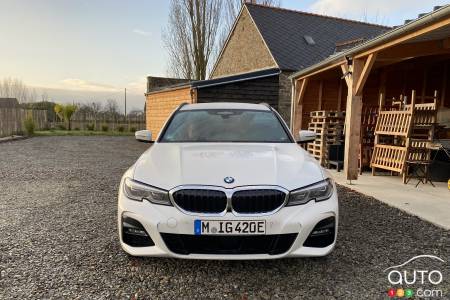 The 330e
A quick reminder about the BMW 330e, which is a plug-in hybrid (PHEV). It has both a battery-powered electric motor and an internal combustion engine. Its estimated pure electric range is 32 km for the xDrive model with all-wheel drive. A PHEV like the 330e gives you the best of both worlds with electric range for local travel and a gas engine that kicks in when needed.

These numbers are interesting, but what does it look like on the road? 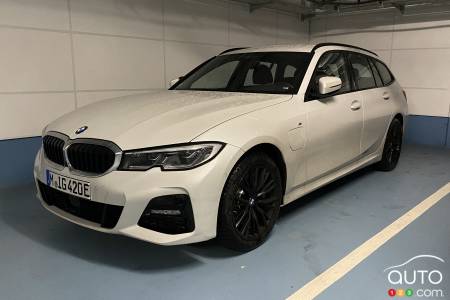 Day One
We took possession of our "family" vehicle in Frankfurt after stumbling, a little jet-lagged, off the plane. We were all excited to discover this 330e. Or rediscover, since I had already driven it in a sedan version in Canada in the summer of 2021. The difference now is that we had to fit two adults and two teenagers plus the four suitcases accompanying us. The Touring version has 410 litres of cargo space, compared to 375 for the sedan. A little game of Tetris and all the suitcases were safely stowed in the trunk.

You should know about this plug-in hybrid version that the battery takes up the bottom of the trunk, which kills some of the cargo space. The trunk capacity in a 3-Series sedan without electrification is still 480 litres. But in all versions, the rear seats can be folded down, which reduces the pain of losing that trunk space a little.

Once we'd settled into the comfy leather seats of our Beemer, we hit the road. We activated the car's GPS and headed for France, or more precisely, Strasbourg. A small distance of 216 km to cover. The GPS indicated 2h 40m of travel time ahead of us... though of course, that wasn’t taking into account the fact that, us being in Germany, there were several portions of highway without speed limits awaiting us. The GPS guiding us, by the way, indicated the way even in the head-up display, a nice touch. 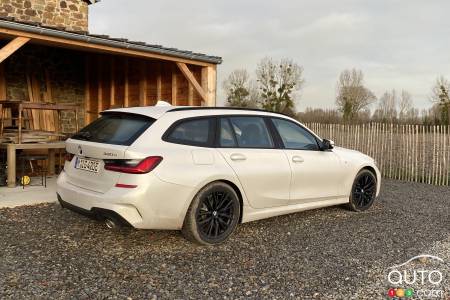 We eased onto the highway, the gas tank as full as well as our hybrid system’s battery. We drove wisely in Normal mode, in which makes the on-board computer independently manages the distribution between the electric motor and gasoline engine. We gave it not much thought and focused on navigating the morning rush-hour traffic. A few dozen kilometres and we’d left behind the flow of commuters heading into town.

Once settled into cruising speed, thanks to the cruise control that was a frequent aid on our trip, traffic moved easily. The limit climbed from 90 to 110 and then to 130 km/h. Everything was going well, a small touch on the speed selector of the cruise control increasing our speed in increments of 10 km/h each time. I heard snoozing from the jetlagged back seat occupants. The car was warm, the morning sun almost dazzled us and the road, as it is always the case in Germany, was as smooth as a billiard table!

Then the signal on the head-up display advising us of the approaching unlimited speed sign appeared. What I’d been waiting for. We were now driving on a three lane highway, almost empty save for us.

No limit
The long-awaited sign arrived, my cue to press the Sport+ mode and mash the right pedal. Until then, the vehicle had been very quiet and the car literally floated on the road. In Sport+, the engine made its presence felt and heard more in the cabin, blessing us with a more raucous sound. The suspension and steering also firmed up. Acceleration was lively and instant; the needle of the speedometer climbed quickly, very quickly, eventually plateauing at 230 km/h. Life was good, even as I dutifully respected the on-dash BMW instructions asking the driver not to exceed 240 km/h! 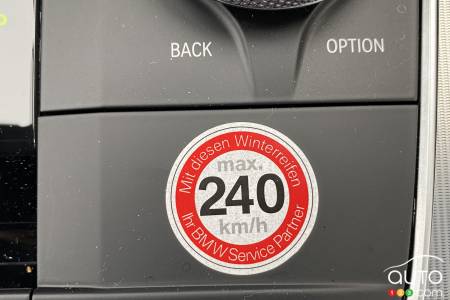 e continued at this incredible pace for several dozens of kilometers, the car showing not the slightest signs of effort. At one point, the highway narrowed to two lanes. No problem, we continued on at a cruising speed of between 160 and 180 km/h. At these kinds of speeds, this car is a serious mile eater, the distance from our destination shrinking quickly even as we continued to feel very safe inside. Acceleration and braking were straightforward and direct and the 216 km were completed in just over two hours.

It’s important to mention that yes, there are portions of the Autobahn network of highways with unlimited speed, but there are many portions with 110 or 130 km/h zones. And in these zones, there’s zero tolerance; you get slapped on the wrist at 3 km/h over the speed limit. Here again, the cruise control and especially the speed limiter help calm our enthusiasm.

Efficient
The rest of the way went smoothly and we enjoy the landscape of the Black Forest until we reached our destination in France. Once we arrived, the on-board computer indicated an average consumption of 8.2L/100 km. Not bad, considering our peaks of speed and our cruising speed. Once arrived, we tied up our car to the first socket we found in the garden.

In the days that followed, we plugged in at home when we thought of it, and otherwise we drove in hybrid mode in the city. We continued to use the automatic management system of our 300 Touring and found the transition between electric and thermal mode very smooth and discreet.

Next week, the conclusion of our short European road trip aboard the 2022 BMW 330e Touring. 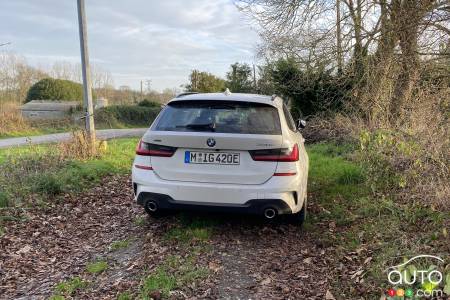 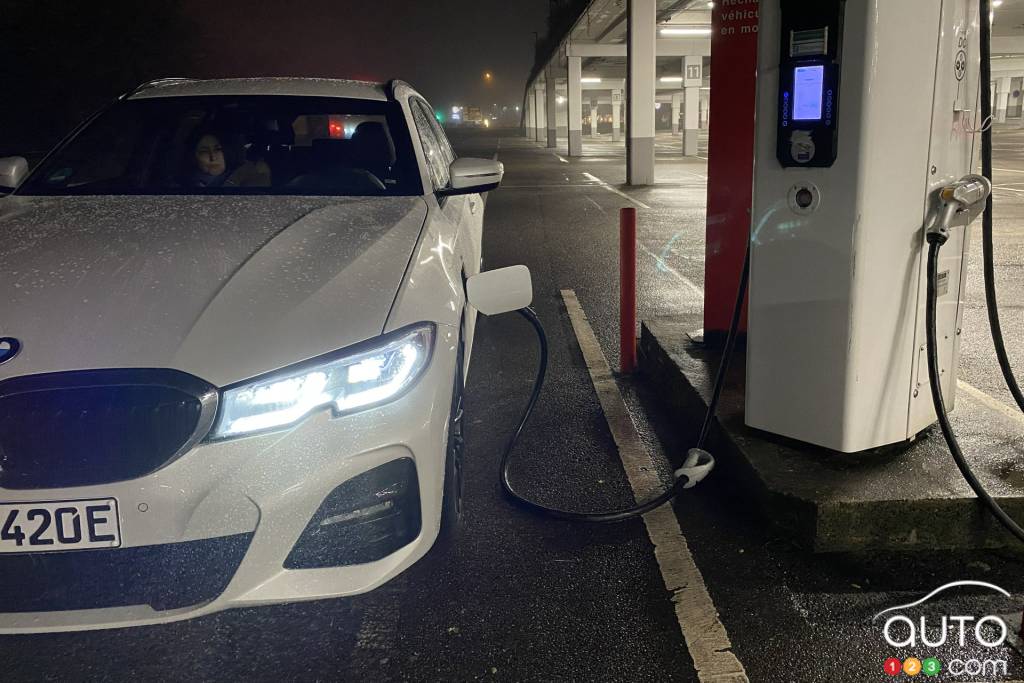 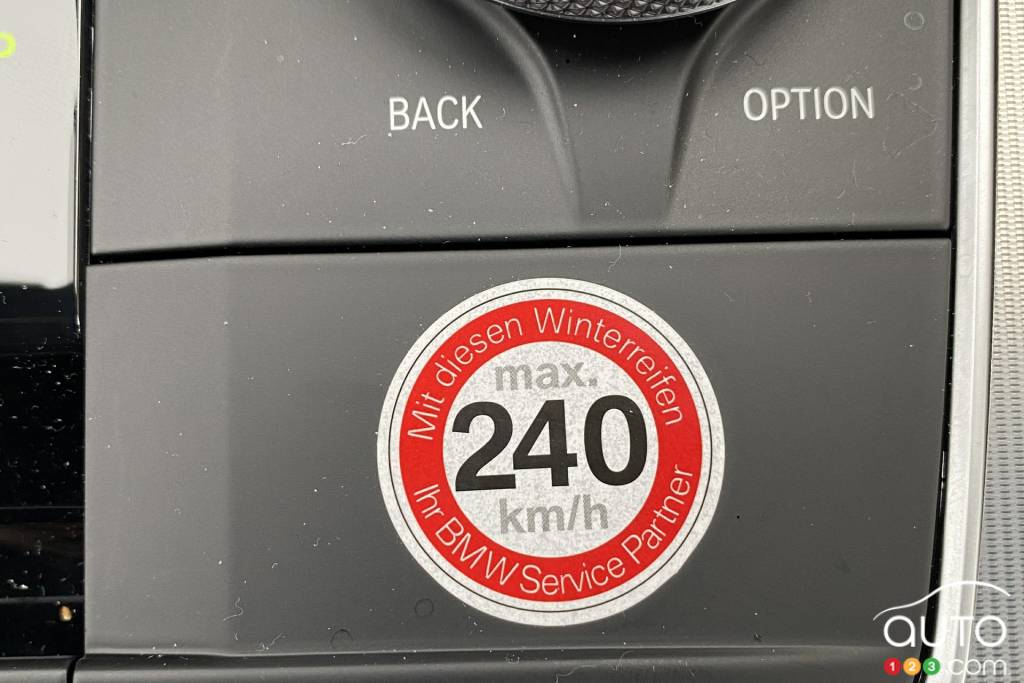 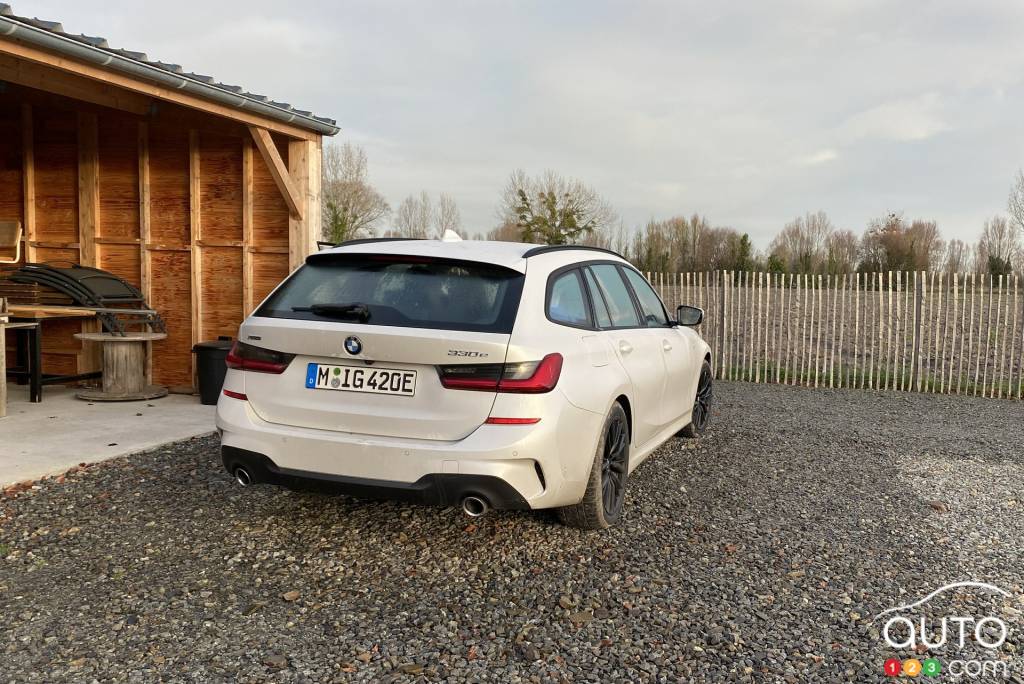 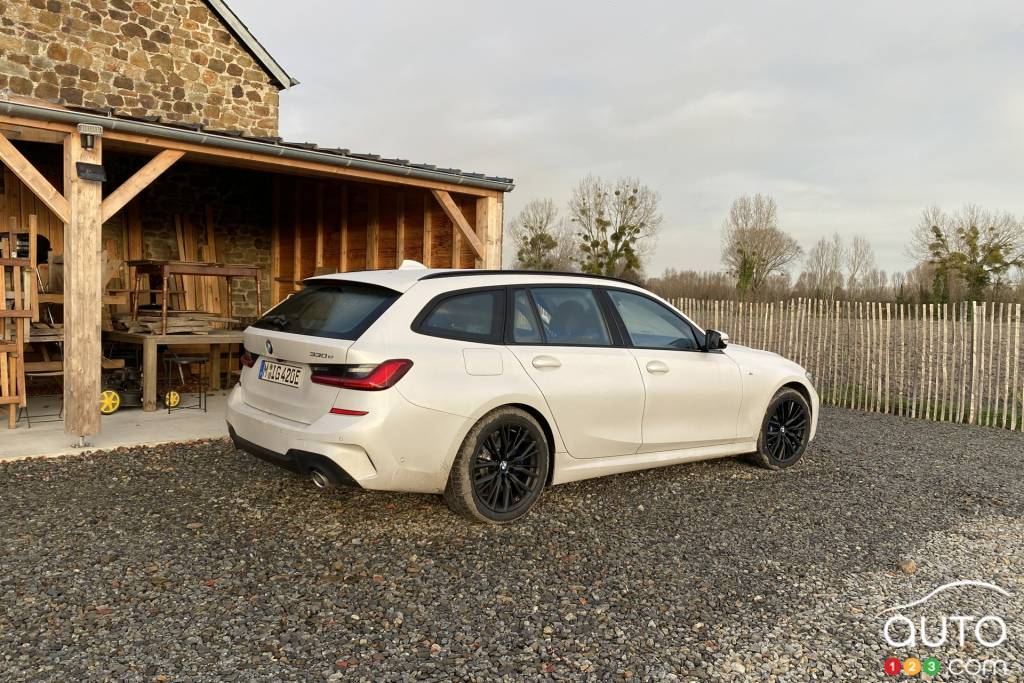 BMW is tweaking its flagship 3 Series sedan for 2023. The design changes mainly touch on the front and back ends, but none of them are dramatic.

Meet the Genesis G70 Wagon, Sadly Coming to Europe Only

Genesis has presented the family version of its G70, a car with absolutely spectacular lines. Unfortunately, the model is destined for the European market on...