Here’s a safe statement if there ever was one: the BMW 3 Series is one of the most internationally recognized sedans on the market. The name first appeared in the 1970s and since its arrival in the German brand's lineup, the manufacturer has been racking up accolades from the automotive press and success in motorsports.

Over the years and the generations, the 3 Series has grown in stature as the range of vehicles has continued to expand. Starting with the previous generation of the model, BMW has been marketing a 330e version; the "e" here of course refers to the electrically assisted powertrain of the German sedan.

Yes, the white sedan you see in these here images is a genuine plug-in hybrid, as the automaker has been increasing its offerings in this direction for the past few seasons... while it prepares the arrival of its small army of all-electric models, of course.

The cues
The 330e doesn't really stand out in traffic per se, at least not as much as some other "green" sedans that inherit unique visual details. This electrified version of the 3-Series does have the visible hatch on the left fender, a sign that the car can be plugged in, but that's about it.

Those who don't like the M340i's grille will be pleased to see the more traditional Beemer grille here, with its vertical pillars. But for the rest, this 3 Series with an electric flavour is quite discreet, as if BMW wants not to scare off customers used to the classic sedan.

In this case of my tester, the 2021 330e came equipped with the optional M Sport package, which adds 19-inch wheels - in the summer, because the ones fitted on my vehicle were 18 inches in diameter in homage to winter - LED fog lights and the M aerodynamic package, not to mention gloss-black window surrounds. Also note that for an additional $250, other exterior components such as the mirrors can also be painted in gloss black.

The powertrain
This model, which is most fuel-efficient 3 Series in the lineup, isn’t particularly revolutionary compared to other PHEVs on the market. Under the hood is the familiar 2.0L turbocharged 4-cylinder engine good for 181 hp and 258 lb-ft of torque, supported by an electric motor adding in 107 hp and 77 lb-ft of torque. The two units combined deliver a total output of 288 hp and 310 lb-ft of torque (when you include the XtraBoost feature that boosts power by 40 hp for 10 seconds when the driver needs a little extra when accelerating).

Green it may be, but the BMW 330e ranks second in power in the 3 Series lineup, just between the 330i and the M340i. In fact, even the official 0-100 km/h time of 6 seconds (5.9 seconds for the two-wheel drive version) is right on the heels of the 330i xDrive's 5.6 seconds. What handicaps the electrified sedan here is the weight, with the 330e xDrive weighing 196 kg more than its 4-cylinder sibling.

Although the xDrive badge is conspicuous by its absence on the trunk - the "No Registration" option was selected in this case - this 330e benefits from the in-house xDrive all-wheel-drive system, which does its job quite well in winter.

On the road
But how does this 3 Series Plug-In Hybrid perform on the road? Because, beyond design, comfort and build quality, the 2021 BMW 330e xDrive need also to deliver on two main fronts: driving pleasure and fuel economy.

In terms of fuel economy, the 330e xDrive unsurprisingly eclipses its peers with an average of 3.5Le/100 km (according to Natural Resources Canada). In reality, I averaged around 6.0L/100km, which is pretty good considering the season, the all-wheel drive and the, ahem, heaviness of my right foot.

The problem is that it is difficult to drive 32 km (as predicted by the Canadian EnerGuide) in pure electric mode. I managed to take a picture of the instrument cluster that showed 30 km, but very quickly, the range started to drop after only one or two kilometres driven. Granted, I should have preheated the interior, which helps to "stretch" the range possible in electric mode, but the reality is the same as for most PHEVs: unless you stay within reasonable distance of work, the grocery store or the shopping mall, electric mode is only very rarely maximized.

On the other hand, a PHEV is not a prisoner of the range limits of its electric mode. Once the battery pack is discharged, the good old combustion engine takes over.

The other question I need to answer before my work is done here is whether the driving experience is up to par. First of all, let me reassure the purists: the 330e xDrive drives like any other 3 Series... except for one small detail! Despite the added power, the extra weight makes the 330e drive a little less energetically than the other two turbocharged models.

Of course, the different drive modes allow you to modify the sedan's behavior, especially when you turn the knob to Sport. Other than that, I found the seats to be hard at times, despite the presence of smaller-diameter wheels. Still though, the 330e xDrive remains a formidable way to get around and it sips gas parsimoniously to boot.

The last word
At a starting price of $54,000 - or $62,045 with the various options added to my test vehicle - the 2021 BMW 330e xDrive is not exactly an “affordable” green car. However, the $4,000 rebate offered by the Quebec government does help residents of that province reduce the financial burden.

But if you are among those with the means to throw that kind of cash on the table, this frugal 3 Series can represent an interesting option, provided that expectations are not too high regarding range in all-electric mode or even regarding cargo space, since the trunk must deal with the presence of the battery pack.

The driving pleasure... of a 3 Series!
Fuel economy
Handling (xDrive) 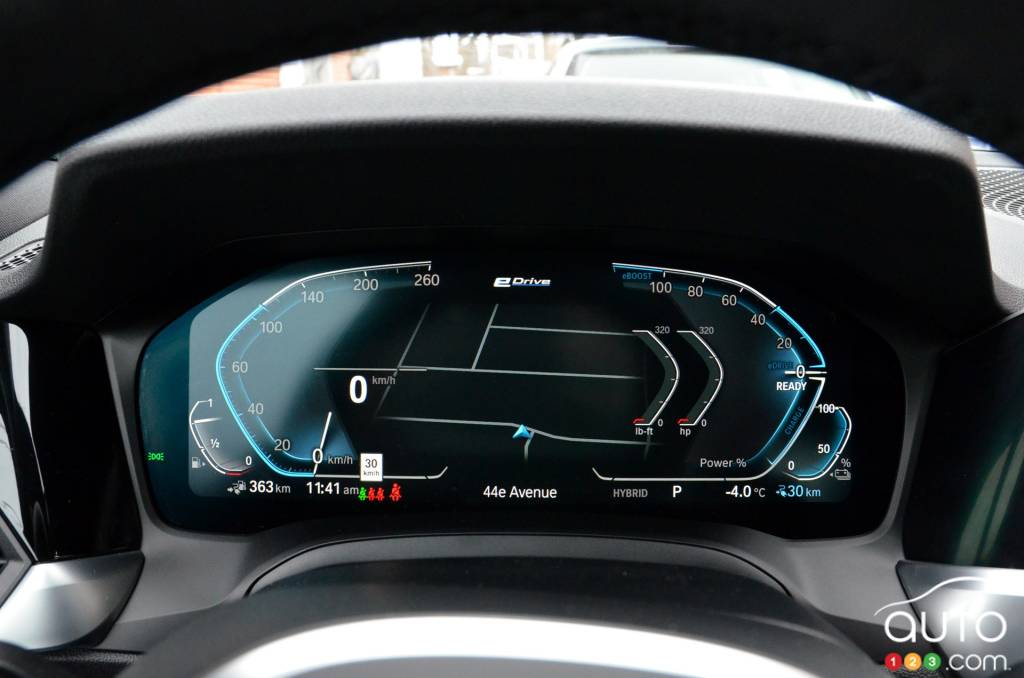 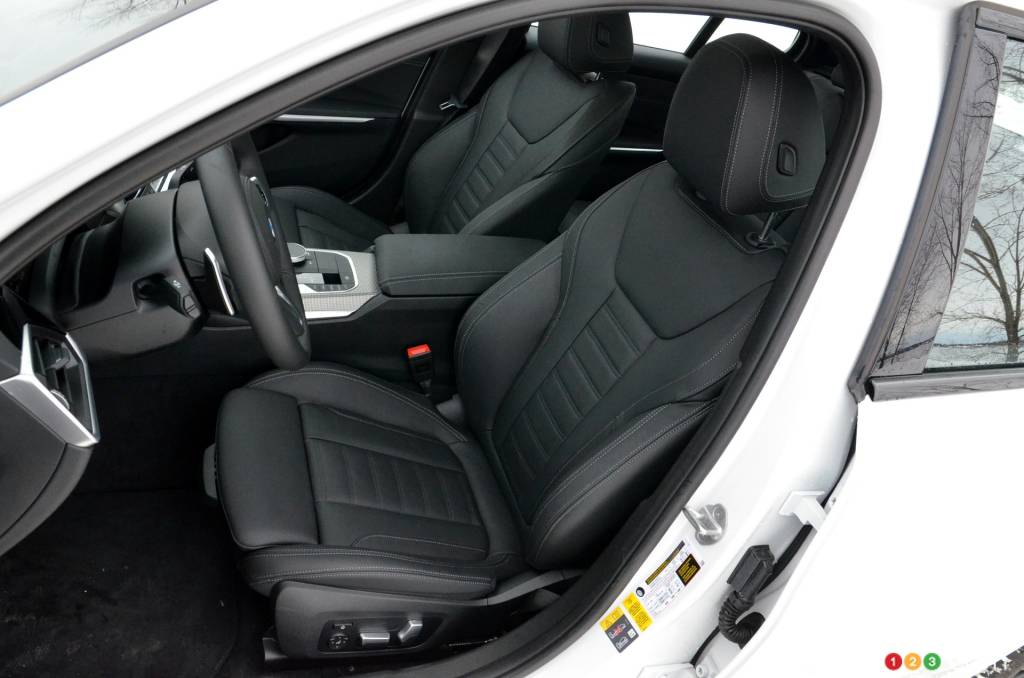 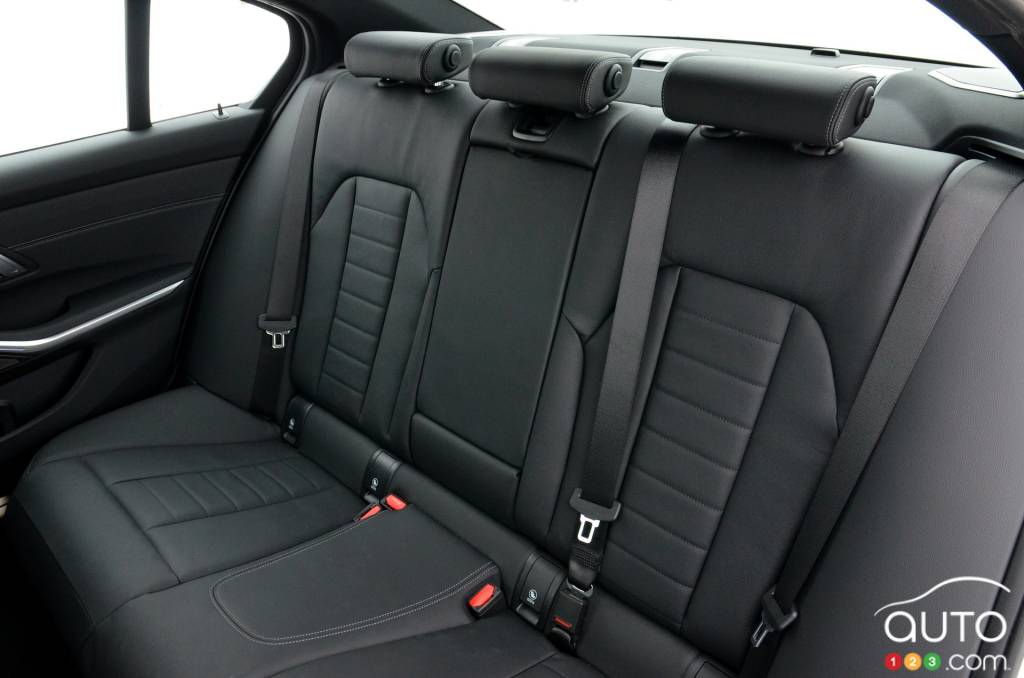 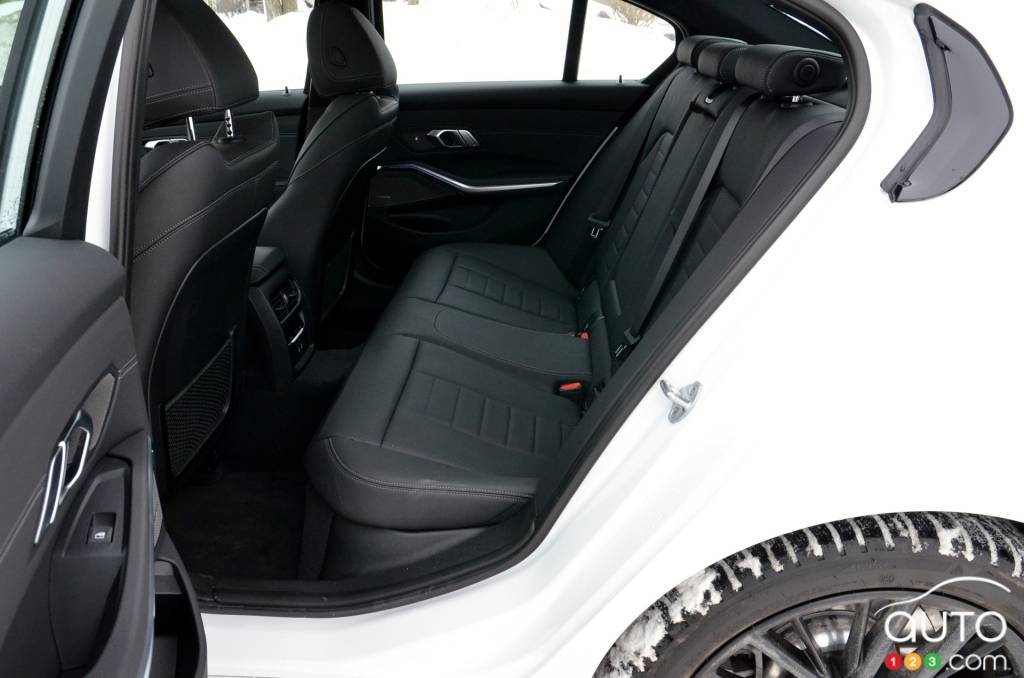