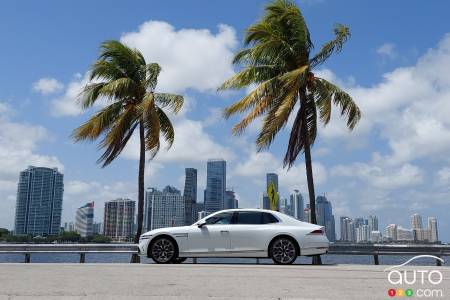 Miami, FL – It’s been many, many years since A/C was used as a meaningful sales pitch for a new car. That dates back to around the same epoch when motels advertised colour TV. But for three days in the late-July heat of South Florida, climate control garnered fresh appreciation for us. None of the multitude of features in the revised new 2023 Genesis G90 – and there is a multitude of them – was as valuable to those of us doing the back and forth between Miami and Key Largo unused to the oppressive heat of this place and time. Not for us to question Genesis' choice of location, mind you, especially since a crazy percentage of G90 sales the brand racks up in the U.S. is logged right here in the Sunshine State.

Features galore
The effective climate control was arguably followed closely by the seat massage system, present in all four seats of the Korean automaker's flagship sedan, now into its second generation. Also on the thumbs-up list is the right rear-row VIP seat, which can be reclined almost fully back with a foot rest to boot for some serious relaxation. Then there’s the real-wheel steering function, which reduces the turning radius of this boat almost to that of a compact car. And the Smart air suspension system, which helps the car anticipate upcoming road bumps so passengers often notice nothing at all. I could go on with the good and the gimmicky features, but I’ll pause that for the moment. More later… 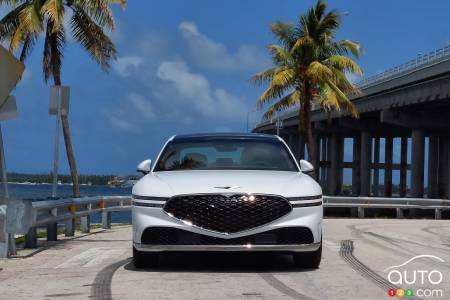 The looks
The new G90 sedan is not radically different from the old one, but it does integrate more of the current design signature elements we find on other recent reworks of Genesis models like the G70 and G80 sedans and the GV70 and GV80 SUVs. Most obvious are the super-thin two-line headlamps bookending the crest grille with its G-Matrix design, and behind that a clamshell hood. The new edition has properly thick C-pillars and is wider and lower in stance than the outgoing G90, and rides on 21-inch wheels with a layered design.

The back end, as often happens with big sedans, is a less exciting affair, though the lighting is attractive enough with the two lines spanning the width of the car. 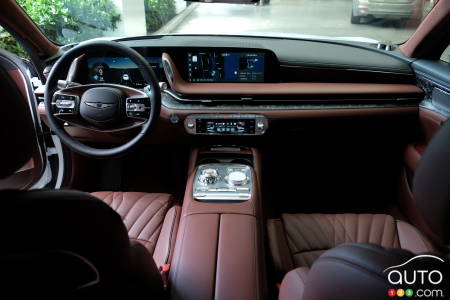 Inside
More important in the case of an executive sedan like this is what’s going in the interior, the acres of space of which are accessible, by the way, using bespoke door handles that pop out of their recessed position when you approach, fob in hand or pocket.

Genesis’s first challenge with its rival to the S-Class is to create a luxurious environment that at least matches those offered by Mercedes et al, and its second is to ensure that environment is at once uncluttered and feature-packed.

You could argue about whether Genesis truly hoists itself up to the same level of luxury as the big Germans, but they’re in the same ballpark, no question – particularly in this flagship, the most luxurious of the current crop of Genesis models, including its SUVs. The finishing is top-notch and the materials look and feel great to the touch, from the “newspaper crown and stripe” wood to the inviting upholstery colours in the offering, from the forged carbon elements to the metal inlay accents to the soft cushions on the rear head rests.

As to the clutter question, well I guess that depends on where you look. The upper dashboard is pretty clean and unfettered, the two screens taking place of honour with few buttons of any kind to be found around them, the climate control vents discrete to the point of invisibility. Look down and things get busier, with the buttons (and rotary knobs) you didn’t see higher up now present, and placed conveniently by the driver’s resting right hand. 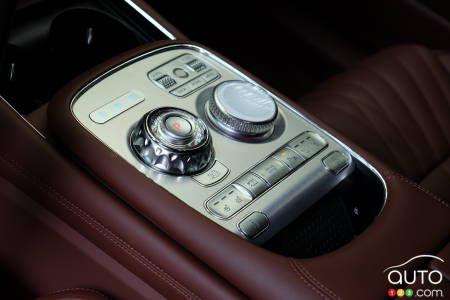 It’s all pretty intuitive and it’s absolutely a good thing the essential stuff is not imprisoned solely within the onscreen menus. But there is a learning curve to know what precisely you need to push, turn, rotate or whatnot to do what you want to get done.

You’ll notice one extra, stand-alone button on the armrest of each door. That’s the button you push if you want to open (or close) your door. Whether that’s an improvement over an actual handle is debatable, but at least it does its bit to de-clutter. 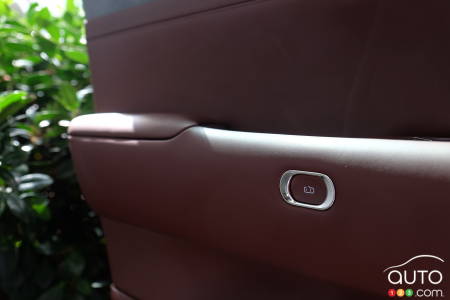 Genesis has presented in greater detail the 2023 edition of its G90 sedan, which has been completely redesigned for the occasion. Buyers can expect, among ot...

Genesis Will Introduce a V6 hybrid Powertrain to its G90 ...

Genesis has confirmed that a mild hybrid V6 engine will make its way under the hood of the 2023 G90 sedan in the United States. We don’t know if that plan in...

The 2020 Genesis G90 delivers sumptuous big-saloon transportation for a midsize price. Can the cache-deprived luxury brand created by Hyundai pry away status...