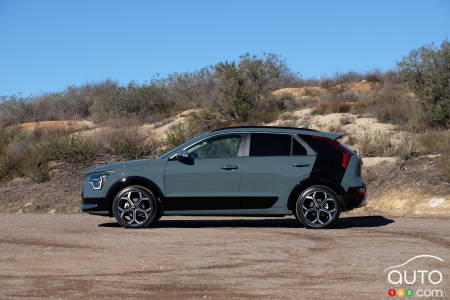 San Diego, CA – Generation Two of the Kia Niro is the culmination of a design process that began with the Kia HabaNiro concept, first introduced at the New York Auto Show back in 2019, in the pre-Covid age.

That concept was, Kia designers told us on our visit to the automaker’s design centre in Irvine, California this week, inspired by street-wear and sneaker culture, and quite obviously that made it a prototype aimed at pleasing mainly a younger demographic.

A lot of the more cutting-edge elements of that concept fell by the wayside on the way to the introduction of the 2023 Kia Niro, so while the model is still aimed at a younger buyer generally (there’s the very popular Seltos for the slightly more ‘mature’ crowd), it’s also not going to scare off older urban consumers (empty-nesters looking to downsize, for example) looking for a smaller electrified solution.

And again, as with Generation One of the models, those buyers can choose just the level of electrification they’re comfortable with: hybrid, plug-in hybrid or full-on electric. Indeed, the Niro will be marketed (as of early 2023, we’re told) in HEV, PHEV and EV format, with all three configurations launching at the same time. 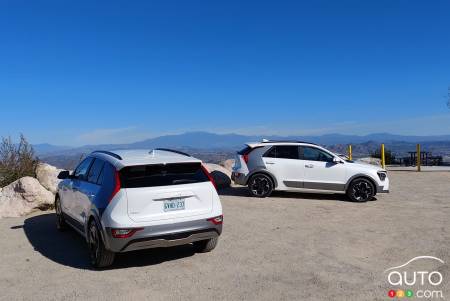 Kia Canada decided to make only two of those formats available to us for our initial contact with the 2023 Niro, and the reason wasn’t complicated. The company expects the Niro EV to make up 70 percent of the model’s sales in Canada, with the Niro HEV straight hybrid expected to account for much of the rest. Not in that calculation? The Niro PHEV, for which Kia Canada has such low expectations sales-wise that it is offering only one trim of it.

The HEV and EV, in contrast, come in trims that range from ‘bare bones’ (well not really, but relatively so) right up to stuffed full (again, relatively so). The models we drove on this day were higher trims, not surprisingly, but they were also Canadian-spec-ed versions - a move that we laud and applaud.

The exterior
It may be more sedate than the funky HabaNiro concept, but the new Niro is significantly bolder and more aggressive than the old in its design. You could reasonably call the look of the old Niro dull, but not this new one. Some might not like the (optional) contrasting colour along the D pillar, but those folks can opt out of it.

Overall, the new Niro is slightly wider and its wheelbase is a bit longer than before, and fun fact, it has gone from being shorter than the Seltos to longer. Height remains unchanged.

Fact is, this is still not an SUV whose visuals try to trick you into thinking it’s something it’s not, namely a sporty road beast. It’s sharper-looking than before, but it’s still not flashy.

The model does come with two distinct nose designs, one for the HEV and PHEV and another for the EV. 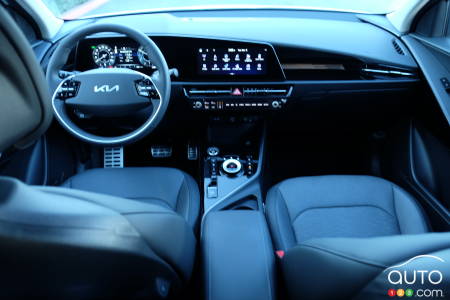 The interior
The interior has also been pretty thoroughly modernized, which is good because other new hybrid and electric models are now out there putting on the pressure. And so the layout of the dash and central console are similar to what we’ve seen in the new Sportage and the EV6, only slightly shrunken. There’s the dual function row of haptic controls, for example. One row’s for the climate control and one’s for infotainment.

Four hours or so in the car did not leave us unduly sore, meaning the seats are comfortable enough, certainly for daily driving and probably also for longer road trips en famille. The increased length does increase space in the second room a wee bit, and head room is still acceptable back there.

Tech-wise, as mentioned the second-generation is far more modern and well-equipped, as it should be. Higher trims get a 10.25-inch data screen and matching-size multimedia screen. A lot of what’s else is what you’d expect, but one notable innovation is the Green Zone Drive Mode, which users can set to automatically engage when entering green zones (residential areas, hospitals, schools, or spots designated by the user). 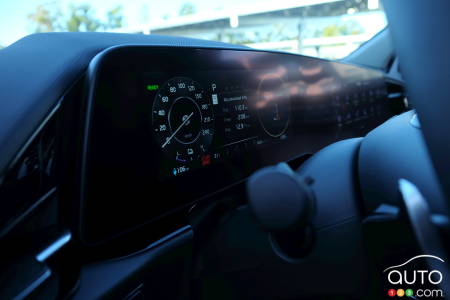 There’s also regenerative braking that can be set according to preference and quickly adjusted for changing situations on the road. And lest you doubt, using the maximum setting as often as possible will make a big difference in range for those who drive primarily in urban and suburban settings.

Kia has integrated V2L (vehicle to lead) technology into the Niro EV as well, which allows users to power external devices when needed using the vehicle. Remote Smart Parking Assist, meanwhile, allows you to get your car out of a tight spot even if you can’t squeeze into the slit of a door opening. And at the back, the Niro now has an available smart power liftgate for the first time. Also for the first time? A 20-litre frunk, or front trunk. It’s not big, but it’s big enough for a large purse, say, or more likely charging cables if the version comes with those. 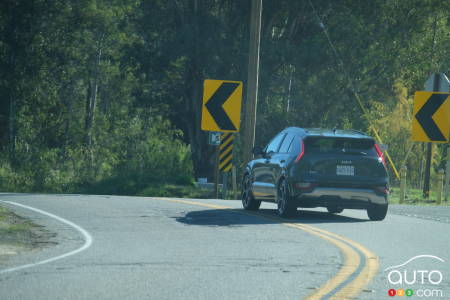 On the road
As mentioned, this 2023 Kia Niro looks nicer than before, but it’s not transformationally nicer either. And as mentioned, this is still a peaceable small-family crossover and not a speed or handling wizard.

Beyond that, the version you choose does determine in part your driving experience. The Niro HEV functions very professionally and ably and you won’t be scared to merge onto highways or make a pass (ing manoeuvre). But you have no control over which motor (ICE or electric) controls what when, and when you get aggressive with the pedal it’s not the latter you get with its instant torque but the former, which is competent but not overpowering.

The Niro EV offers the benefit, thus, of all the torque all the time. Initial acceleration is far more impressive. But there’s another advantage, as the model’s big battery pack gives the Niro a lower, better balanced centre of gravity. Handling around corners is sharper and roll is cut down. As a result, the same rule applies as before when it comes to the Niro: the EV offers the best driving experience of the model’s three variants.

It also delivers the best fuel economy, obviously. In the HEV, on this day we averaged 5.1L/100 km in mixed driving (but with a few road construction delays that surely drove up the number somewhat). That’s… OK, but it didn’t hit our unofficial gold standard of 4.5L/100 km. That said, in more regular usage in more urban settings, that 4.5L is likely within reach. (The official figure is 4.4L/100 km).

By the way, the PHEV version we did not drive comes with an official electric range of 55 km, which makes it eligible for the federal EV incentive. 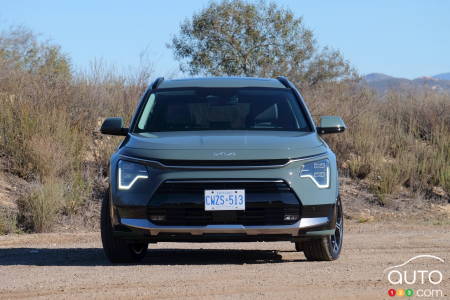 Pricing
Here there’s a positive way to look at things, and a negative one. On the one hand, changes to EV incentive criteria federally and in some provinces over the last year now mean that EVs can be eligible for those incentives even if their base price is above the $45,000 threshold. But Kia has held the line and kept the $44,995 price point.

On the other hand, there’s a vehicle called the Bolt EV that Chevrolet has gone aggressive with, setting a base price of just under $38,000. Now, the new Niro EV is a superior vehicle to that small car in several non-negligeable ways, but is it $7,000 better? Consumers will decide…

The product range
Here’s the breakdown of what you get with each trim of each configuration of the 2023 Niro:

Kia Canada believes the two most popular trims in this structure will be the Niro HEV EX Premium and the Niro EV Premium +. 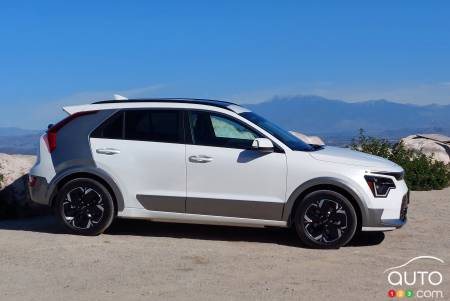 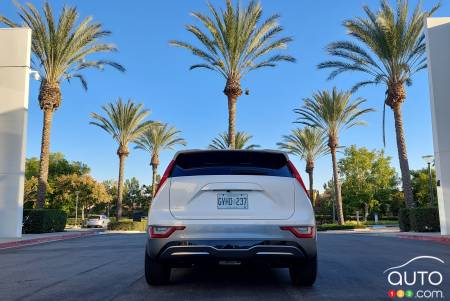 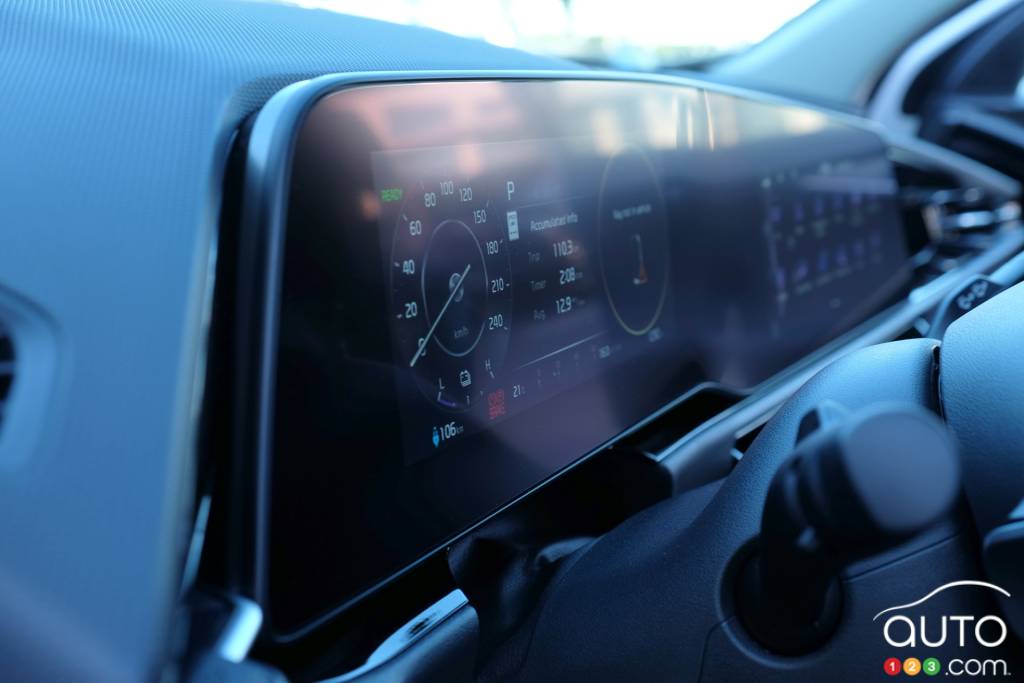 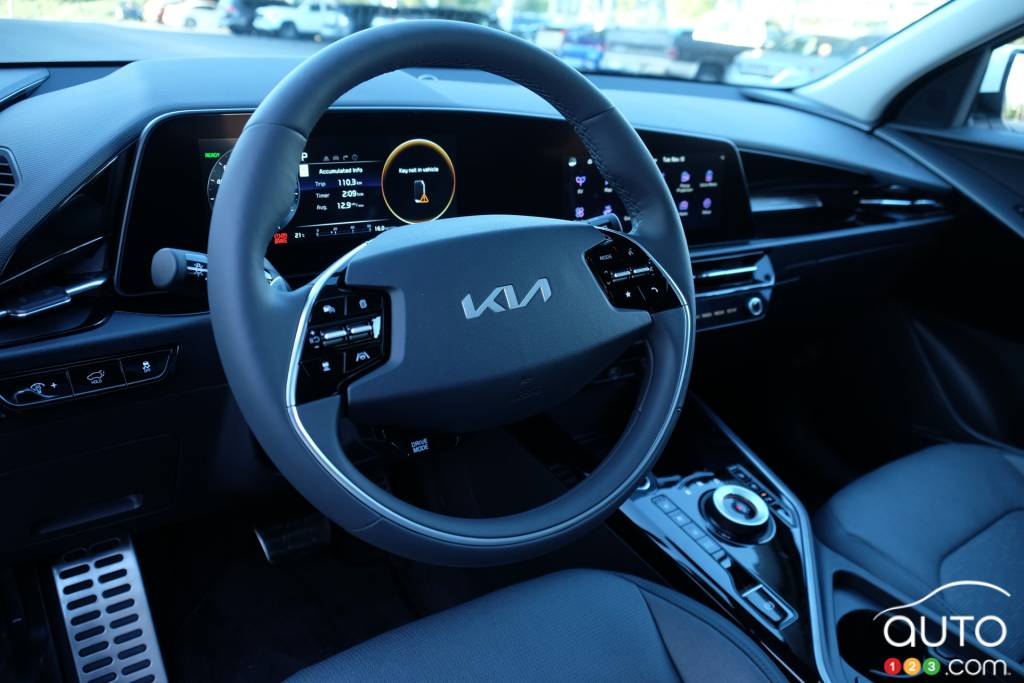 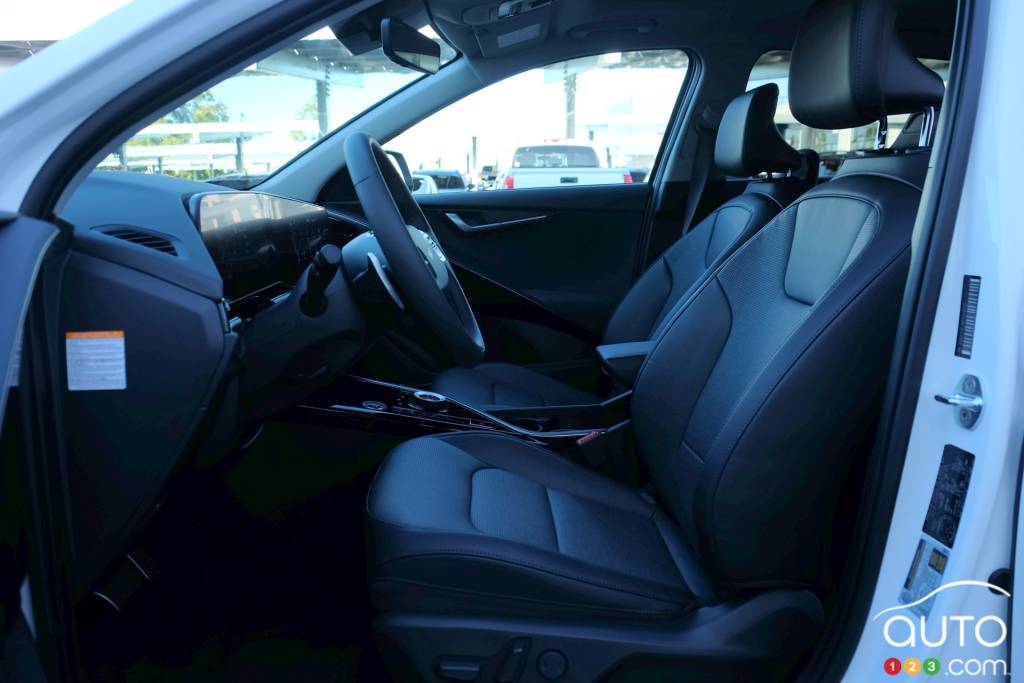 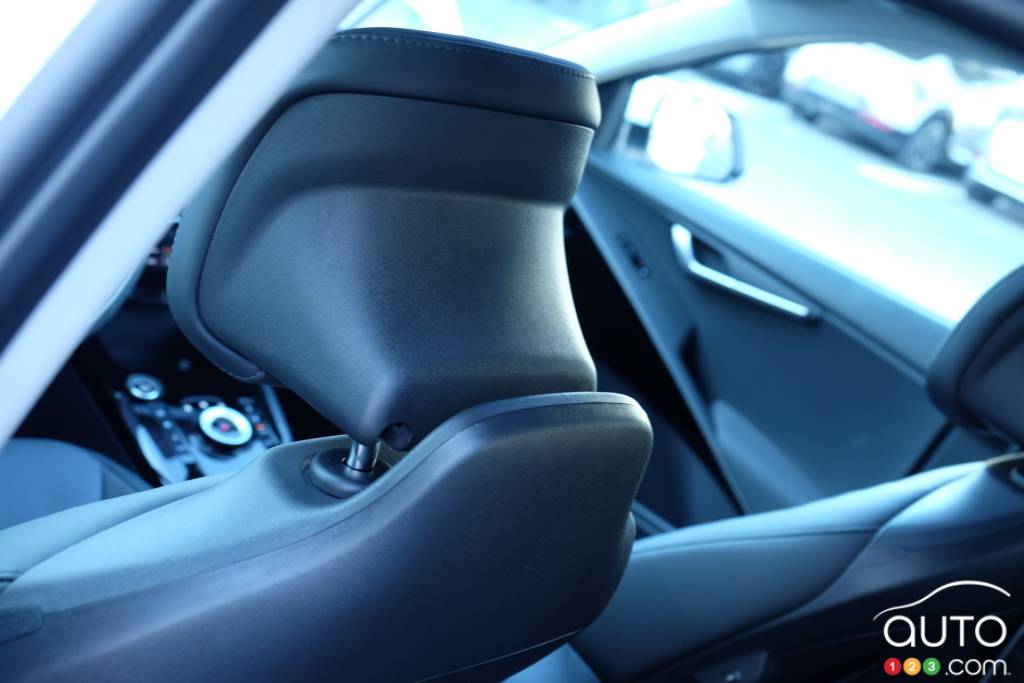 Auto123 has been putting the Kia Niro EV to the long-term test, through several seasons in fact. Today, part 18, as we set out to identify the groups that ar...