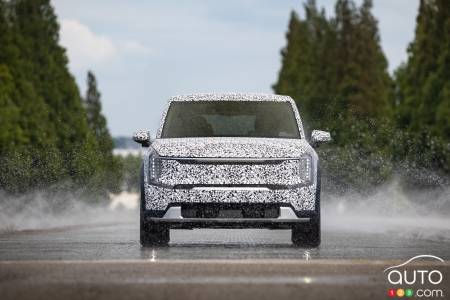 The Kia EV9, one of the several upcoming all-electric vehicles in the Korean automaker’s pipeline, is currently being tested. Not surprisingly, some enterprising photographers managed to snap images of the camouflaged prototype in testing in Germany and the images have been circulating online.

This time, the images of the model that have just appeared are from Kia itself. Some of the camouflage has been removed, so we have a better idea of some of the details of the SUV, the styling of which is not too far removed from the concept that was first presented a year ago.

We can see some differences in the headlights, but the signature looks very similar. The same goes for the bumper, which has the same features, but the grille surface seems to have been switched out. The mirrors on the model shown are production units, whereas the concept that was unveiled at the Los Angeles Auto Show last year clearly featured typical ultra-slim concept mirrors. 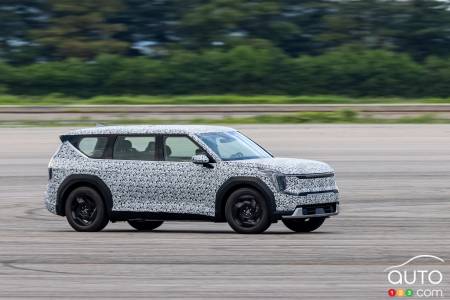 The profile follows the clean, square lines of the study. The glass area is impressively large. Even the shape of the wheel arches seems to have been retained. The wheels have a new style, but are still aerodynamic to optimize range.

The EV9 should be officially unveiled in the first quarter of 2023. It remains to be seen whether it will be a 2023 vintage or whether Kia will label it a 2024 model. If history is anything to go by, it could be the latter – we saw this with the 2021 Seltos, first presented in February 2020.

The EV9 is built on the E-GMP platform used for the EV6. This means a 350-kW fast charging capacity and certainly single and dual motor powertrain options. 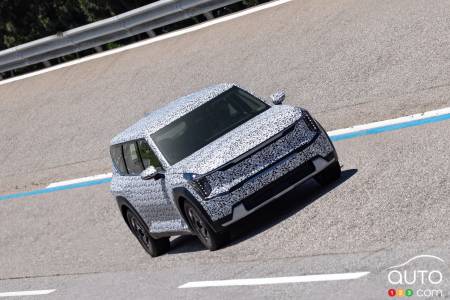 Kia confirms it will go ahead with a production version of the EV9. The big all-electric SUV will debut in the UK in 2023, before crossing the Atlantic for t...

Kia presented the Concept EV9 at the Los Angeles Auto Show today. This rough all-electric equivalent to the Telluride is still some ways off, however. A prod...

The Polestar 3 Shows its Backside Ahead of October 12 Unv...