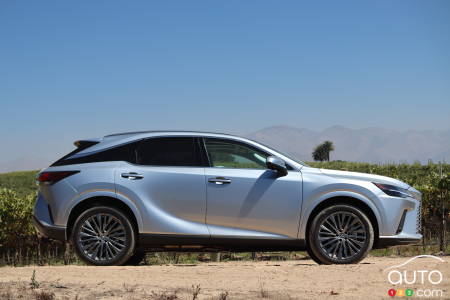 It’s hard to imagine the compact/mid-size luxury crossover segment existing without the Lexus RX. It was one of the pioneers of the segment when it launched back in 1998 and it continues to lead the pack in terms of Lexus sales – that’s over 150,000 units sold in Canada since its debut – and sit near the top of the charts when it comes to overall segment leaders today.

Needless to say, it behooved Lexus to get it right for 2023, with the RX getting a full redesign from the ground up. Lexus says every part is new, right down to the lug nuts. On a larger level, the RX now sits on the GA-K platform, shared with the NX, itself redesigned for the 2022 model-year.

In addition to it sitting on a new platform, the big news for 2023 is that while the entry-level RX 350 and RX 350h models have made a return, the RX 450h is no longer, having been replaced by the RX 500h model.

Note that the 450h will return, but only as a RX450h+ plug-in hybrid model likely some time next year. The model will, however, debut alongside the others in certain world markets, namely those that have more stringent emissions standards than North America. Further, while the three we are getting at launch are built in Canada for the Canadian and American markets, the RX 450h+ is only being built in Japan for now.

Also gone for the time being is the three-row RX-L model, with the oft hinted at but not quite confirmed TX set to fill that void. In terms of styling, what most interested me since having seen images of the new RX was whether or not it would look as compact and athletic in person as it does in those images. That’s because prior to that, I’d never considered the RX to be much of a styling superstar. Sure, the previous-generation F Sport models with their blacked-out spindle grilles and dark wheels were a step above what we’d previously seen from the RX, but the proportions remained a little too conservative and somewhat awkwardly high-riding.

Sure enough, in person, the new RX is a different ballgame.

First of all, the cabin appears to have been moved further back, providing a long hood and very hatch-like profile, more akin to the smaller NX than the outgoing RX. It looks more compact but it has a longer wheelbase, a wider rear track and is wider overall than the old version. Overall length remains the same, however, so while you get more interior space (found mostly in the back seat and cargo area), it’s no more difficult – in fact, it’s easier -- to thread through tight city streets, to park and so on.

In the case of the 500h it’s easier still thanks to the addition of rear-wheel steering that can swivel the rear wheels up to four degrees from centre, shrinking the turning radius by 1.3 feet as well as stabilizing the RX at higher speeds. Inside, we find a standard 7-inch digital gauge cluster and all-new Lexus Interface multimedia with standard 9.8-inch display or optional 14-inch display, the latter of which is truly an epic item to encounter. It’s sharp, wireless Apple CarPlay and Android Auto come standard, the graphics are properly modern and the interface is much more streamlined than previous. It’s a fully touch-operated or voice-activated interface, meaning the previous frustrating touchpad-activated system is a thing if the past.

As far as the “Hey, Lexus” voice activation system story goes, the Lexus folks at the launch relayed a story where they’d asked for a document listing all the commands you could do, and that document would stretch to almost 50 pages. Basically, there’s a lot it can do.

One thing I couldn’t get it to do, however, was change the drive modes. Which would be nice because to so requires navigating menus on the touch display. There are no hard buttons or wheels for it, and the drive-mode stalks found on some other Lexus products aren’t here, either. As awkward as those were, I did like having traditional controls to do my bidding. In the event, there are only four drive modes to choose from – Normal, Sport, Eco and Custom – so it wasn’t something I spent too much time playing with. Comfort-wise, the longer wheelbase and wider rear track have added more rear seat and cargo room, but front seat space rains largely unchanged, except for one crucial feature: the distance from the leading edge of the dash to the windshield is now shortened, meaning a better view out. While driving, you feel you’re more “over” the front wheels as a result. The infotainment display is also thus closer to the driver, reducing the long reach formerly required.

Other than that, the front seat remains couch-like in true Lexus fashion, and while the cushioning is paramount, there could be just a little more support there. In the 500h especially, a little more side bolstering would lead to a more athletic feel. It does point to the fact that even in its most powerful iteration, this isn’t really supposed to be a performance SUV.

Speaking of F Sport: while the 350 models get F Sport Series 1, 2 and 3 trims as well as Luxury, Premium Luxury and Executive trims, the 500h starts life as an F Sport model so gets only Series 2 and 3 and none of the Luxury or Executive choices. Of the two optional F Sport packages, Series 2 is the meatiest, providing the rear-wheel steering, torque vectoring, 21-inch wheels, digital rear-view mirror and a few other trinkets. Series 3 is mainly an electronics upgrade, providing 21-speaker Mark Levinson audio, lane change assist, front cross traffic alert, adaptive high beams and more.

That’s all good but while they haven’t yet released pricing, it seems like many of those features – especially the safety aids – should have been there at base, at least if we’re talking 500h.

BMW introduces the production version of the M-exclusive XM SUV. Here are all the crazy numbers for the high-performance PHEV coming for 2023.