Tempe, Arizona – The 2020 Chevrolet Corvette is parked in front of the hotel we’re gathered at for the first drive launch of the car, and as per Chevy’s plan it has attracted a growing crowd of lovers of beautiful sports cars. The Torch Red paint finish this particular model is decked in would be enough all on its own to draw attention, but the spectacular shape of this instant legend of a car is a head-turner in its own right.

As this represents very-first mid-engined Corvette, the stakes were high for the carmaker – and it looks like it has won its bet. The spy shots we’d been seeing for months don’t do justice to the looks of the C8 in person.

The designers for the model could easily have gone overboard for this new supercar, but in my view they found just the right balance. They even managed to preserve some links to the C7 that preceded it, notably with the plunging hood. This time, however, that hood sits atop a grille that’s higher off the ground and framed by nacelles that house the anti-fog lights.

For the rest, it’s all brand-new, starting with the caved-in side walls that are bordered as you move back by a contrasting air vent, which also houses the electric door-opening system.

The trunk features a window that allows for gazing in on the 6.2L small-block V8 engine, which delivers 495 hp and 470 lb-ft of torque in conjunction with an 8-speed Tremec dual-clutch automatic transmission.

Having the engine placed mid-ships allows the designers to create a more dynamic visual presentation, though as mentioned without going too far. Another detail worth noting, the exhaust tubes have been moved over from their prior central position to the outer edges of the C8, a change necessitated, of course, by the placement of the engine.

Under the front hood, meanwhile, is a storage space able to accommodate two pieces of soft luggage; the back trunk is roomier. In all, you get 345 litres of cargo space.

Welcome aboard
Quite often sports cars, especially those with engines placed farther back, can be a real challenge to get into or out of. That's not the case here, thankfully.  Our tester came with GT3 seats with increased side padding, but these didn’t get in the way of accessing or extricating oneself from the car, quite easily I should add.

Once installed aboard, the first attention-drawing element is the squarish steering wheel with twin arms angled downwards towards the middle. The grip is very intuitive and the driver’s fingers fall naturally on the paddle shifters on the back of the wheel.

In front of that, a customizable 12-inch data screen tells you all you want to know at any given time on the road. It’s also possible to option in a head-up display, and it was on hand in our test vehicle on this day. To the right on the central console, angled towards the driver, is an 8-inch touchscreen that’s easy to access and used. You’ll also find on the console the buttons for shifting gears as well as for choosing the drive mode.

It’s all pleasingly simple, no crash course required to master the main commands. And the seat is generous enough to accommodate even more, well, generous-sized folks.

I did raise an eyebrow at the long strip of buttons on the central console between the two occupants. At the least, it’s an original way to configure the commands for things like the climate control, heated and ventilated seats and of course the on/off button for the whole system. While at first glance it looks like it will require some twisting of the body to access all of those buttons, it turns out not to be the case. On the other hand, the induction smartphone charger is placed on the back of the seat and is not easily accessible.

Yowza!!
Once comfortably seated, the side mirrors were duly adjusted and the rearview mirror switched to camera-view option. After playing with those mirrors, I had determined that rear three-quarters visibility was basically non-existent. However the optional camera-view mode gets you a much wider view angle; it proved very useful when driving the 2020 Corvette on city streets.

Now it was time to bring the engine to life, done by pushing a button - this being 2020 or almost. A satisfying roar when the engine awoke delivered the promise of good things to come in terms of performance.

I was struck immediately by the relative tameness of this near-super car. In fact, if you’re keeping your right foot under control and resisting the temptation to push the car to show you exactly what it can do, you might as well be cruising along in a V8-equipped sedan. In Normal mode the suspension is set to comfortable, while the transmission moves up and down the ladder quickly imperceptibly. As for the Brembo brakes, no need to warm them up like you would ceramic jobs before they are at maximum effectiveness.

As it happened, an “opportunity” to test those brakes came up at a speed of close to 150 km/h, and the stopping distance of the car in that situation was impressively short. To the relief of my passenger in the car, a Chevrolet engineer assigned to accompany on this first drive!

Town and country
Our test drive took us along secondary roads in the suburbs of Tempe, which provided the range of useful contexts for our needs: city streets, highways and smaller roads with winding sections. In the first environment, the Corvette stands in contrast with many other vehicles of its type in delivering a reassuring drive, thanks to excellent visibility out front and on the sides, while the camera-view mode of the rearview mirror provided a very good look at what was going on behind me.

One point worth noting: the pedal is large and well-designed, so poses on issues even if you have wear size 48 shoes. Same applies to the left foot rest.

At the start of our test drive, my passenger recommended the most comfortable Tour mode, which would allow me to evaluate the different available settings. The other modes are Weather, Sport and Track, which you could already find in the previous generation of the Corvette. In addition to those, Personal and Z modes let the driver customize further the settings to their taste. Z mode is activated via a button on the left arm of the steering wheel.

Unsurprisingly, the more you set the parameters to gain a sportier drive, the more dynamic the engine, transmission and steering get. What’s more, my tester was equipped with a magnetic suspension that also changes depending on the settings you choose, so that the road handling and grip get even more impressive. All this without sacrificing comfort, unless you push every possible dial to 11 out of 10 of course. In which case, your body has no one to blame but you. 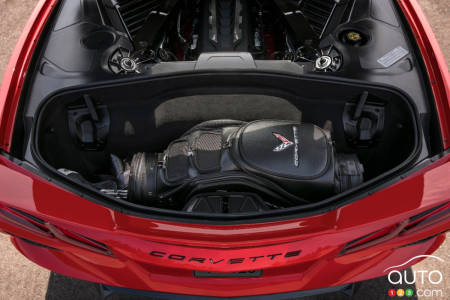 No matter which drive mode you choose, whichever type of road you’re on or what speed you drive, the new Corvette drives like a dream - a sharp, dynamic and responsive dream. It swallows up curves without hesitation while you keeping you more comfortable than you have a right to expect in such a sporty beast.

Track mode, however, is clearly best left to the track; the steering gets very, very firm then and the gears shift much more agrressively.

Patience…
The recent strike action that affected GM has meant that production of the model has been delayed until next February. So patience is in order for those interested in acquiring this sports car able to storm from a stop to 97 km/h in three seconds, and which comes at a starting price of under $60,000.

You can if you want send this price higher with any number of options aimed at enhancing the 2020 Corvette’s appearance, comfort, performance and on-road behaviour.

Chevrolet has also announced – and unveiled – a convertible version of the C8, which will be made available in the coming months. Note though that the Corvette we drove has a removable roof panel that can be stored in the rear trunk.

My overall impression after a too-short first drive of the 2020 Corvette is that this new Chevy “supercar” has all the elements required to make of it a big success – if not a legend. 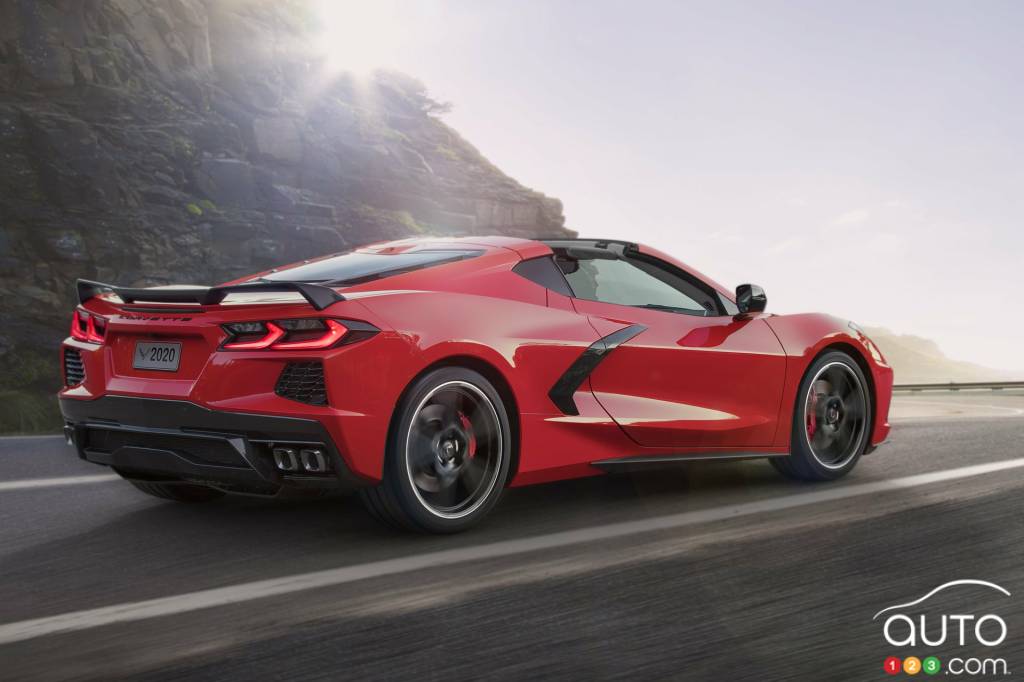 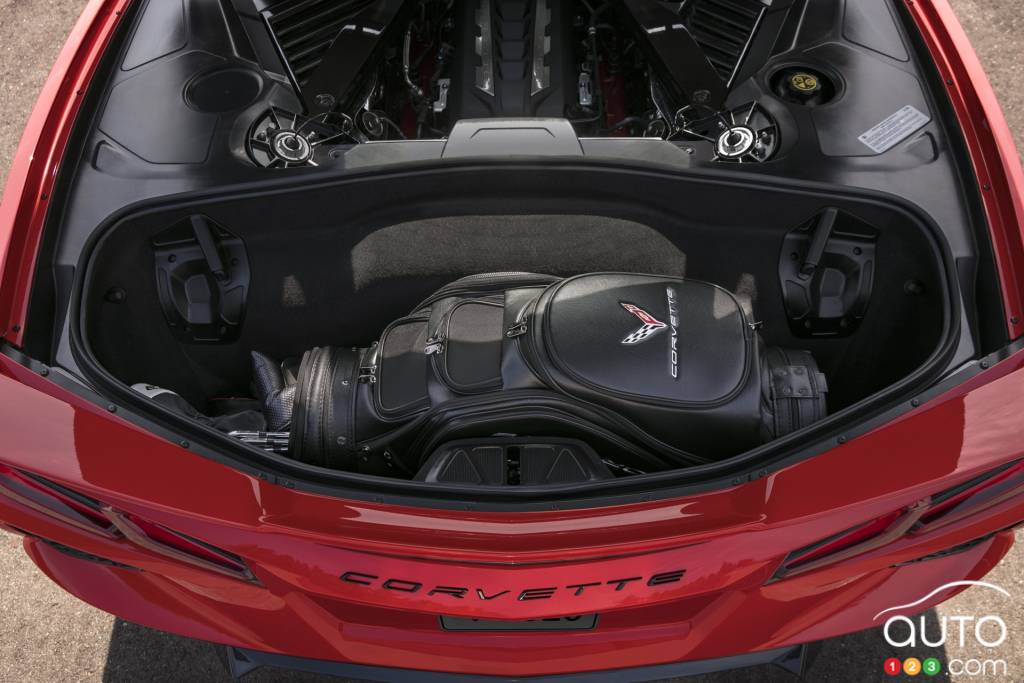 Articles By
Denis Duquet
2020 Chevrolet Corvette: The Technical Side o...
Article
2020 Hyundai Sonata First Drive: A Sophistica...
Review
Chicago 2019: Our Top 10 Vehicles of the Auto...
Article
More from this author