It’s a fun tradition, every January, to take a gander at the automotive sales chart to see how each of the American muscle cars performed the previous year. In recent years there have been just three, and they don’t figure among the best-selling models in the industry overall, but how they do versus each other allots bragging rights to one company.

Let’s agree we’ll take all the levity we can get after the year we’ve just experienced...

The 2020 sales figures show that the Ford Mustang maintained its front-runner status in the segment for a sixth consecutive year. Last year, Ford sold 61,090 Mustangs in the United States; Dodge sold 52,995 Challengers, which is quite a feat considering the age of the model; and Chevrolet delivered 29,775 units of its Camaro to customers in 2020.

In all three case, sales were down compared to 2019, but considering the pandemic, this is pretty unsurprising, and not really cause for worry. Perhaps most impressive was the 14 percent increase in sales of the Shelby GT350, buyers clearly rushing to buy the model before it was withdrawn from the catalog. 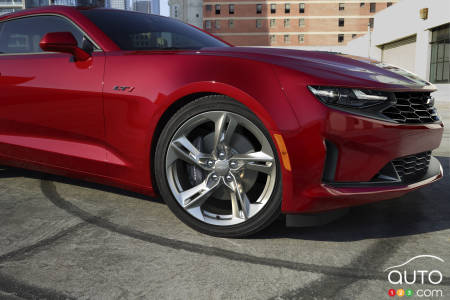 In the case of the Camaro, on top of the pandemic-related 2020 decline, it’s worth noting that its sales have been dropping for a few years now. Back In 2014, Chevrolet sold 86,297 units of the model - nearly triple what it managed to sell in 2020.

All this naturally fuels rumours about the future of the model. We know that it will be in the catalog for a few more years, but the horizon beyond that is hazy. We’ve said this about a few models: will electrification be its lifeline?

As for the Dodge Challenger, it seems in better health, but it will have to undergo a redesign one of these days. And given the merger between FCA (Fiat Chrysler Automobiles) and PSA (Peugeot Société Anonyme), it's unclear what fate awaits the model.

And the king of the hill? No worries about the future there. The Mustang’s next generation is expected in 2022 as a 2023 model.

The U.S. Postal Service is releasing five stamps paying tribute to the pony car era. The collectibles each represent a mythical model from this period of his...