Auto manufacturers no longer have the luxury of overlooking even one SUV segment. Acura has accumulated experience, expertise and a solid reputation in the field, having introduced the first-generation RDX model in 2007. For Cadillac, the XT4 is entering this market for the first time in 2019.

These days there are so many models and sub-niches that it’s difficult to define which players are competing with others in a segment. We can say that the RDX ranks very high on the 2018 sales hit parade, finishing second at just over 8,000 units sold, a few hundred more than the Mercedes GLC and about 2,000 behind the Audi Q5 that leads the compact luxury SUV segment and has for several years. The too-new XT4 is not yet in the sales rankings.

The RDX debuts its third generation model for 2019. Compared with the outgoing version, it’s longer and wider and it offers a more-generous living space. The silhouette is youthful and fresh, and there are no fewer than five versions to be chosen from, including for the first time an A-Spec version with 20-inch black rims unique to this version. The styling is not really a radical departure from what we’ve seen before, but it’s pleasing to the eye with a grille that’s unlikely to repel anyone. This is already a pretty important first point in its favour: an Acura that’s distinctive, a looker even.

Specifications for the 2019 Acura RDX

Photo gallery of the 2019 Acura RDX 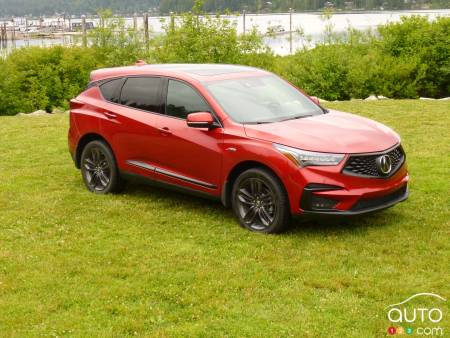 Back to the future
Under the hood, Acura abandoned the six-cylinder to return to the 4-cylinder 2.0L turbo engine, as in the original model - except that this 2-litre unit is noticeably more responsive than the first one. A slightly more-civilized version of the Civic R engine was installed under the bonnet. Instead of 306 hp you have 272, as well as 280 lb-ft of torque available at 1,600 RPM. This is a more-than-generous amount of power that renders the driving experience newly dynamic.

A high-tech interior
Acura has always been about creating young and modern interiors. To the delight of many, Acura has returned to buttons and knobs. Climate control, the heated seats and audio system volume, all things you adjust regularly while driving, are no longer hidden in the menu and screen menus anymore, but can be accessed via a physical button and knob – and for that we’re thankful. 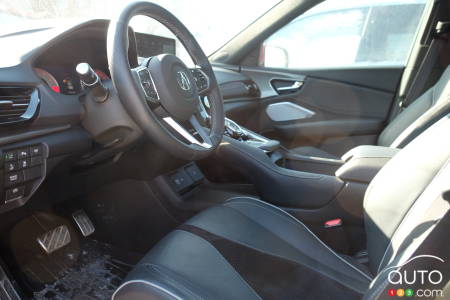 There is, however, a fly in the ointment, and it’s sitting on a touchpad. Acura has installed a "True Touchpad Interface", a wafer-thin surface you slide your finger across to move an arrow on the screen above, or to draw letters or numbers. Like all similar systems on the market (found in Mercedes-Benz and Lexus vehicles as well) this one is as frustrating as it is distracting and useless. Install a touch screen and the problem is fixed. Please.

In the Platinum version, there are heated seats clad in perforated leather that are 16-way power-adjustable. In the centre, a floating console is easily accessible, and even the optional head-up display has a button to adjust the height.

Dynamic driving
Very solid body, no crackling noises, scaled-down weight, an all-wheel drive system that with guts and an engine with character: it’s a difficult hand to beat. Another bit of good news is that the drive modes make a real difference, unlike many models where nothing happens between Normal and Sport mode. There are 4 drive modes here: Snow, Comfort, Sport and Sport+. The latter will inevitably slap a smile on your face. The Sport mode is the default one we used for most of our test week. 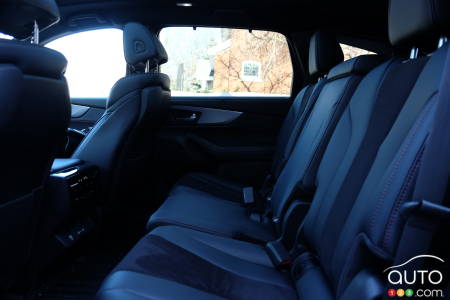 Calibration is the secret behind this SUV’s positive driving dynamics. Even in Sport+ mode, the RDX is not uncomfortable. It feels more nervous, without making everything go all stiff. The engine sound is amplified through the audio system, but it’s rather well done. There’s no dead time in acceleration and the engine regains strength at all speeds thanks to the very able 10-speed transmission.

Conclusion
The RDX comes with a price starting at $ 43,990 for the base model; from there you climb to $54,900 for a Platinum Elite fully equipped version. These prices are comparable to the competition and frankly, the RDX stands up to all competitors, and then some.

Cadillac, fashionably late to the party, has to hit the ground running with its new compact SUV. As the XT4 is dedicated to international sales, its styling is quite Europe-inspired, and that’s a good thing. Cadillac's unique design language works well in a more compact format. The unique style of the headlights at the front and back gives an instantly recognizable visual signature and the proportions are well-balanced.

Photo gallery of the 2019 Cadillac XT4 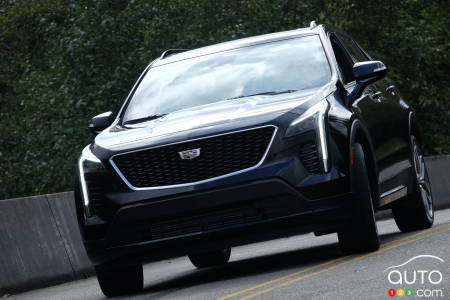 Modern, welcoming interior
Despite the smaller size of the XT4, Cadillac says second-row passenger legroom is the most generous in its class. Just what that class is that Cadillac is talking about here is unclear, however. The interior is fine, but pace is not as ample as what you get in the RDX. The quality in the fit and finish department is first class, that much is clear.

Users’ multimedia needs are met on an  8.0-inch touchscreen, plus there’s a wireless charger for smartphones and GM's suite of connectivity functions including 4G LTE and wi-fi hotspot; active safety systems are available, but only in the Premium Luxury and Premium Sport models. In this regard, it’s a slight advantage to the Cadillac. On the other hand, cargo space lags behind the RDX.

The same engine as the others
It seems like there’s only one, boiled-down recipe for engines in this category that all manufacturers use, and Cadillac followed it. This engine, like all competitors’ blocks, is a 2.0L twin-turbo making 237 hp and 258 lb-ft of torque. It’s associated with a 9-speed automatic transmission that offers excellent performance. 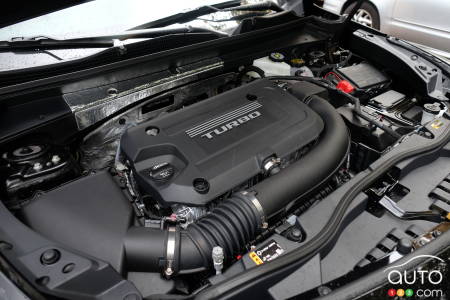 The engine comes equipped with a cylinder deactivation system and a stop/start function. It is a modern unit, but it doesn’t offer the responsiveness that the RDX gets from its powertrain. Let’s put it this way: if these two SUVs were athletes, the Acura would a triathlete, while the XT4 would be a… golfer.

A more placid temperament
On the road you have a choice of drive modes, Sport being the most interesting. The Premium and Premium Luxury models definitely lack a visceral close relationship with the road, and putting the vehicle in Sport helps bring them at partly to life. The engine and transmission work well together, but they deliver a placid experience at the wheel. The four-wheel-drive system mainly powers the front wheels, but it can when needed send all power to one single wheel. Overall we found it less efficient and responsive than the RDX’s SH-AWD system.

Conclusion
In our view this is a very successful product - one of the best vehicles in the Cadillac family, in fact - but it doesn’t target quite the same customer as the nervier RDX.

Advantage Acura RDX
The RDX clearly bests its rival in terms of driving, handling and space for both passengers and luggage, plus Acura’s history of reliability is far more positive than Cadillac’s.

Advantage Cadillac XT4
From a technological point of view, the XT4 is ahead. For one, the 2019 RDX had no Apple CarPlay or Android Auto compatibility at its launch. GM understands that people now want to stay connected and its system offers better interactivity and more user-friendliness. We also give it the edge when ti comes to styling and overall presentation.

Similarities
Stack up the two models decked out in similar equipment, and the pricing runs roughly even. Ride smoothness, the quietness of the ride and the driving position are also on a par in these two premium models.

Verdict
Because the RDX is more generous with space, more powerful, nimbler and more apt to engender a higher satisfaction rate among owners, we’ve got to go with the RDX. That said, if you like golf, you can treat yourself to the XT4 - it will certainly please you.

Styling that stands out
Good level of technology
Excellent transmission

New York 2018: A plethora of automotive journalists assembled at Cadillac HQ in Manhattan to partake in the official unveiling of the new Cadillac XT4, the f...

Acura has announced it will produce the 2021 Acura RDX PMC Edition for those SUV drivers who want a bit of NSX DNA in their vehicle. Only 30 units of the spe...