Subaru made all-terrain vehicles before they were in fashion, and, most importantly, they were making theirs all-wheel drive well before that became a thing.

Subaru also, once upon a time, had the Impreza that was only moderately successful. The company decided to give it some added plastic, to raise the car by a few centimetres and to give it some new colours. Thus the Crosstrek was born, and Subaru saw its sales explode.

In 2018, Subaru introduced the second-generation Crosstrek, based on the new edition of the Impreza with which it shares its engineering and basic architecture.

The Qashqai has been around and successful in Europe for a while, but it was considered too small to sell in North America, especially in the U.S. After much hesitation, Nissan finally introduced the model in 2017 and in less than two years, it has become one of the best-selling models of the brand.

Subaru Crosstrek
After the model’s big overhaul in 2018, the only change for 2019 is new software for the touchscreen-based infotainment system that offers more intuitive operation. As before, it supports Apple CarPlay and Android Auto. To preserve that sturdy look, the Crosstrek retains its plastic armour, the higher ground clearance and its pastel colours, all part and parcel of its charming personality.

Our review of the 2019 Subaru Crosstrek

Specifications for the 2019 Subaru Crosstrek

4 cylinders
Under the hood sits a 2.0L 4-cylinder engine developing 152 hp and 145 lb-ft of torque. The Convenience, Touring and Sport versions come with a 6-speed manual transmission that can be switched for an optional CVT transmission (the CVT comes standard in the Limited model). The Subaru EyeSight Active Safety Suite is also available in the Sport and Limited versions. 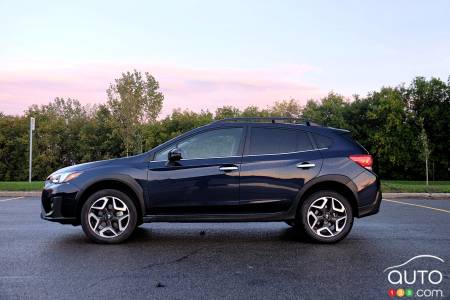 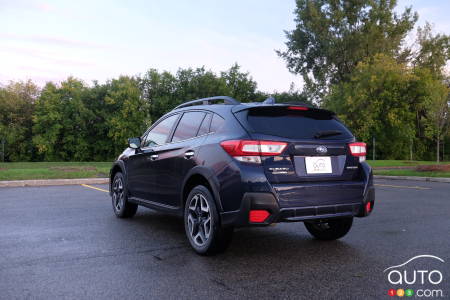 On the road
The most powerful selling point of Subaru has always been and remains the all-wheel drive system. Whether you opt for the manual or CVT, the Crosstrek comes with a sophisticated centre differential that makes the 4WD system more efficient than its competitors. For this you can thank the torque vectoring system and the X-mode button (with CVT gearbox) that offers a complement to the 4WD mode by playing on the available traction. This function boosts the assurance of the all-wheel-drive system by adding hill descent control and the hold button.

Nissan Qashqai
This small SUV launched in Europe in 2007 takes its name from a nomadic tribe from Central Asia, known for the quality of its Persian rugs. While the name is unusual and its spelling the giver of fits to many, the model has become one of the fastest-selling SUVs at Nissan – not least because of the attractive price point that comes with it.

Specifications for the 2019 Nissan Qashqai 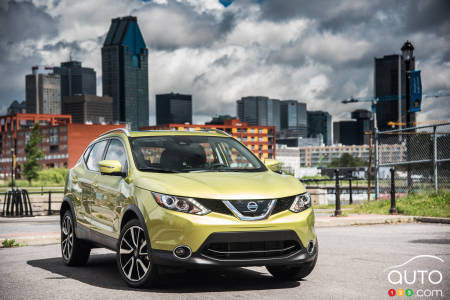 Practical size
Built on the same platform as the bigger Rogue, the Qashqai offers ideal proportions. Unlike the Crosstrek, which is only available in AWD, Nissan offers its Qashqai with two- or four-wheel drive. All models come with automatic emergency braking, blind spot and cross-traffic alert and rear door alert system. Nissan has also added Apple Carplay and Android Auto integration and an additional USB port for 2019.

It’s actually difficult to compare the base model to a Crosstrek; there’s just not enough equipment there. You have to go for the SV trim that includes automatic headlights, fog lights, sunroof, rear parking sonar, dual-zone automatic climate control , keyless entry, cruise control and a leather-wrapped shifter with heated steering wheel, as well as an enhanced collision avoidance system with pedestrian detection, which helps it measure up to the Crosstrek.

For 2019, the SL version adds the Pro-Pilot option, 19-inch wheels and the navigation system, as well as leather seats. 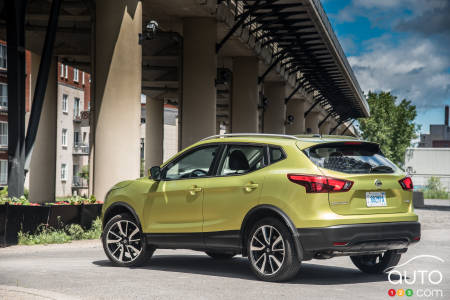 Small engine
Only one powertrain choice is available in this model, and it’s comprise of a 141-hp 2.0L 4-cylinder engine with 147-lb-ft of torque, a 6-speed manual transmission and front-wheel drive in the base trim. Optional in the S model and standard for other versions is a continuously variable automatic transmission (CVT). All-wheel drive is an option in the S and SV versions and standard in the SL.

Urban driving
The preferred habitat of the Qashqai is clearly the city, but it is pretty impressive out on the open road as well. Its rigid chassis makes for a solid and confidence-inspiring ride, among the best in its category. The manual transmission is well synchronized, even if the engine revs up a little high.

It’s also worth noting the excellent sound insulation and the well-calibrated suspension that only further enhances the comfort level. Another advantage of the base version: the absence of electronic driving aids. Nissan is fascinated by safety and that’s great, but the truth is drive-assist systems can be very intrusive, which gets on the nerves very quickly. In this case, less is more, or at least better.

Advantage Crosstrek
If you have an adventurous spirit and love to occasionally venture into more hostile territory, the Crosstrek will be able to take you there; it’s better-equipped than the Qashqai to face difficult terrain or poorly-maintained roads. It also offers a more positive ride, even if the chassis does permit a bit too much body roll for our taste.

Advantage Qashqai
The small urban adventurer from Nissan is, as mentioned, ideal for the city. Its small size sneaks everywhere, yet its cargo space is very generous. For those who want to minimize what they spend at the pump, the FWD version is very frugal.

Similarities
If you stack up two versions with all-wheel drive and similar levels of equipment, the price points of the Qashqai and Crosstrek are virtually the same. Both models also display a youthful appearance and offbeat character with the choices of fashionable exterior colours, and both have a practical hatchback so they’re pretty much tied in the versatility category.

Our verdict
Difficult here to decide clearly in favor of one model or another, because the models do aim to please slightly different clienteles. The Crosstrek will perfectly suit those who are looking for a vehicle that can get you to your tucked-away winter cottage in nasty weather, for instance. It's the best four-seasons vehicle in its class. The Qashqai acquits itself almost as well at this task (when equipped with AWD), plus it offers excellent value for money in its base version, with enough space for a family of moderate size.

Let’s call it a tie…

2020 Nissan Qashqai Review: Not To Be Overlooked

The 2020 Nissan Qashqai SUV is an in-betweenie tailor-made for those wanting something a little less than the Rogue, but a little more than the Kicks. Its in...