Not too long ago we pitted the popular (and that’s a euphemism) new 2019 Toyota RAV4 against the 2019 Mazda CX-5, and gave the nod in a close call to the RAV4. We did the same with the 2019 Subaru Forester, stacking its merits and faults up against those of the 2019 Volkswagen Tiguan, with the former emerging victorious.

Now we throw the two winners into the ring to see what happens. Let's start by saying that the models are both veterans, models that benefit from a wealth of experience by its designers and are supported by loyal and well-established clienteles. One is renowned for its legendary all-wheel drive and the other for its high reliability.

The Forester began its career as a product that veered off the beaten path, created more for outdoors enthusiasts than the typical products on the market. The SUV was a pioneer in the field of all-wheel drive; this feature, almost unique in its early days, has attracted a large an fiercely loyal demographic. AWD become a trademark of sorts for Subaru, but today the model faces fierce competition that now offers comparable features.

Our review of the 2019 Subaru Forester 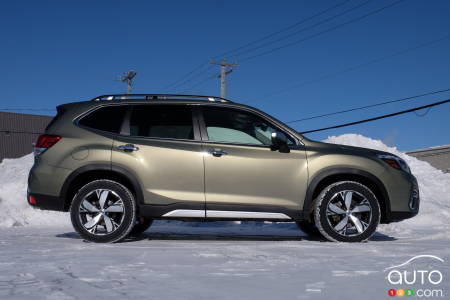 Subaru, which has always lagged behind from a technological point of view, has improved in that area with its latest version of the Forester (which by the by has taken on a bit of volume). Think of the DriverFocus system, which uses facial-recognition software to monitor fatigue or driver distraction, then works with the EyeSight active safety suite to reduce the risk of an accident. Other safety features include standard LED lights on all models.

More space
With an extended 30 mm wheelbase and a new chassis, the new Forester is larger and offers more space with an optional power liftgate for the luggage compartment. Now, Subaru has never been known for its avant-garde interior. The style is very conservative and looks like nothing so much as a New England living room on a rainy day. There have been some efforts to join the modern age with features like a new touchscreen (6.5 or 8 inches depending on the versions) and seats that are more comfortable. 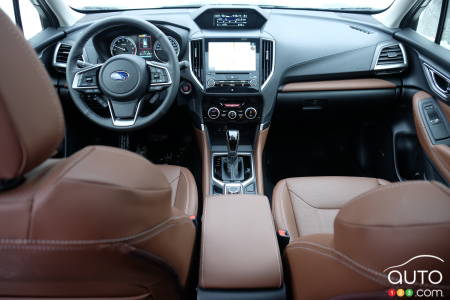 The classic flat engine
Guardian of tradition, the flat H engine is still at work. The 2.5L makes 182 hp and 176 Lb-ft of torque. The Lineartronic Continuously Variable Transmission (CVT) can be optioned with a 7-speed manual mode (which we highly recommend). This engine works in tandem with an X-Mode all-wheel-drive system that allows the driver to tailor the car's performance to snow and mud, as well as a more basic version of the X-Mode system on all models to optimize traction on slippery surfaces and steep slopes.

The powertrain also benefits from a torque vectoring system that transfers the power of the right wheel to the left as needed for superior handling. Even though the competition now has 4WD vehicles, they are not all equal and Subaru is still a length ahead with its proven system.

It's been 22 years since this little truck, so simple-looking in its early incarnations, first appeared on our roads. Despite that simple appearance, the model was an immediate success. Like the Forester, the RAV4 seems immune to fads – a trait that’s pure gold to manufacturers. Last year, 51,000 units were sold in Canada, which is remarkable as a rise in sales in the last year of a model generation is a rare thing.

Lots of new this year
In recent years, Toyota has at least attempted to up its game in the styling department, by being a bit more daring in its changes. The design of the new RAV4 is more robust, especially the front grille and the front end in general, for a more sculpted silhouette. To broaden the reach, the RAV4 comes in different variations on the same theme. While the hybrid model is more elegant, the Trail version projects a more adventurous image. There’s a clear trend in the industry that SUV models gain volume with every refont, and the RAV4 is moving in this direction too.

Specifications for the 2019 Toyota RAV4 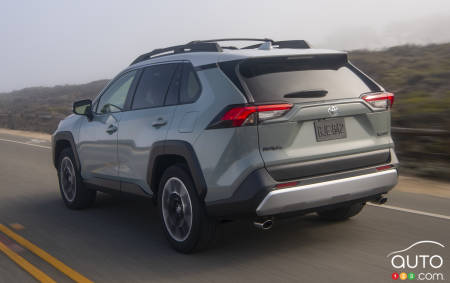 More modern layout
Attempts at modernity aside, sobriety has always been and remains the watchword at Toyota, and this is reflected in the RAV4. You need to go to the XLE model on the trim chart to have decent equipment such as a sunroof, dual-zone automatic climate control, power liftgate and a leather-covered steering wheel.

The Limited comes with a 7.0-inch screen with navigation or a digital instrument cluster. Options include a hands-free tailgate, ventilated front seats and heated rear seats.

Toyota still relies on its Entune system for multimedia management. This one is compatible with Apple CarPlay, but it still leaves Android phone users out in the cold. Sigh. 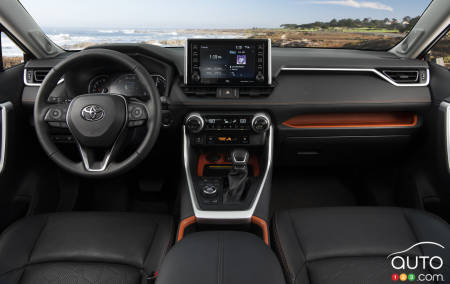 Simple and efficient powertrain
The RAV4 model is equipped with the 4-cylinder engine of the latest Camry. The engine delivers 203 hp in a purely gas-fed configuration, and 219 hp in hybrid versions. Paired with an 8-speed automatic transmission that provides a better power range than the old 6-speed unit, it also reduces fuel consumption. On the hybrid model, the engine is associated with a CVT transmission. The new RAV4 gets a combined fuel economy rating of 7.8L/100 km in the hybrid version and 8.3L/100 km for gasoline-only models.

Emotionless driving
Driving the RAV4 does not confer the same level of pleasure as the Forester does, but in return the quality behind the product is evident at every turn. The platform is the Toyota New Global Architecture (TNGA) that provides a solid foundation for maximizing comfort, safety and utility.

The longer wheelbase and wider front and rear tracks, for example, ensure a more stable ride. The body also offers 57% better stiffness compared to its predecessor. The platform also makes it possible to lower the engine and thus lower the center of gravity for greater maneuverability.

Unlike in the Forester, which comes with standard all-wheel drive in all models, you have the choice of two- or four-wheel drive with the RAV4.

Advantage Subaru Forester
The Forester offers compatibility with both Apple CarPlay and Android Auto (the former very recent to Toyotas, the latter still not available). You also have more legroom in the front and back. The standard all-wheel-drive system is the most efficient in its class. The Forester is also more interesting to drive, even if we miss the turbo engine. It also offers better ground clearance and a shorter turning radius for better maneuverability.

Advantage Toyota RAV4
The Toyota RAV4 outperforms the Forester in terms of trunk space, plus it delivers a more comfortable ride, has rear side vents, comes in a fuel-economical hybrid version and can be had with an available wireless smartphone charging stand.

Similarities
In terms of the warranty offered, the two are equal. Both models come standard with fairly advanced drive assist functions and can, if necessary, tackle light off-road trails. And both offer large rear seats, a big cargo area and an optional power liftgate.

Verdict
It's no easy feat declaring a clear winner, as both vehicles score very well in a number of departments. But for the value you get for the money and for its superior handling, the Forester is probably the vehicle best-suited to our climate. It also offers a few more amenities than the RAV4, at a lower price. There’s also the resale value to consider; the Forester’s is excellent. The Forester also has a superior interior environment, offers more legroom in the front and rear and provides better visibility.