If you’re at all tuned in to automotive news, you’re probably aware that the popular Jeep Wrangler SUV has been comprehensively revised for 2018, even while it holds on to a visual look that hews closely to that of its predecessor, the JK.

The new model goes by the codename JL, the latest in a line that stretches back to the CJ (Civilian Jeep) of the post-World War II period, which was followed by the 1980s-era YJ (the one with the rectangular headlights), and then by the popular TJ editions of the 1990s and 2000s (marked by the return of round headlights and the arrival of the coil spring suspension). The JKs launched in the mid-2000s were the first generation of Jeep Wranglers to be produced in two editions: the two-door version and longer, 4-door Unlimited. This formula is repeated in the 2018 JL.

Presented in Sport or Sahara finishes, The TJ version is the one that saw Jeep start to offer a pushed-to-the-limit version of the Wrangler, called the Rubicon. This extra-rugged SUV was created to scratch the itch of extreme off-roading fans, most of whom could no longer afford the process of getting their Jeep Wrangler modified the way they wanted. Among the modifications made by Jeep’s engineers for the Rubicon, of particular note are the firmed-up suspension, locking front and rear differentials, a detaching front stabilizer bar for more suspension clearance, and most especially the special transfer case with a final ratio of 4:1 (as opposed to the regular Wrangler’s 2.92:1), which makes it much easier to climb over obstacles.

It didn’t take long for the Rubicon version to attain icon status in the all-terrain SUV segment. Jeep then set about revising all of its Wrangler models for 2018, including the now highly popular Rubicon. 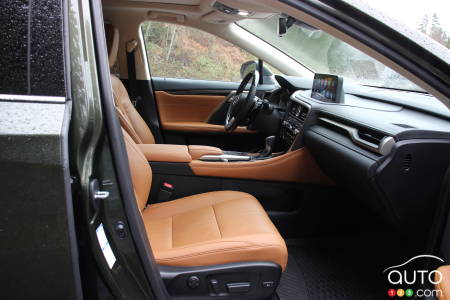 But where did the Rubicon name come from? From the most demanding off-road course in America (if not the world), the Rubicon Trail, an old 19th-century pioneers’ trail that linked to two region of Lake Tahoe in California, but long since abandoned – until it was rediscovered by fans of military Jeeps during the 1950s. Passionate about off-road excursions on super-challenging terrain, they modified the old trail, moving it by about 20 km, so that it could be (more or less) passable while maintaining the high level of difficulty that has earned it its reputation today.

Slowly but surely, events bringing together many owners of modified Jeeps were organized to run the Rubicon Trail; these were called Jeep Jamborees. Today, the biggest one of all, the Jeepers Jamboree is held once a year in the month of August, and attracts several hundred Jeep owners who spend two days completing the trail, south to north. At the midway point, participants join in a unique overnight camping experience in the Eldorado Sierras along the small Rubicon Springs River, from which the trail first took its name.

Eventually, of course, the folks at Jeep took an interest in the event and took inspiration from it to create the ultimate off-roader, made in the factory and given the name Rubicon!

We’re now on to the third generation of the Rubicon, the JL, even more highly evolved than the TJ and the JK! The 2018 Rubicon is once again offered in two- or four-door versions, and is easily recognizable with its 33-inch wheels and unique visual cues. 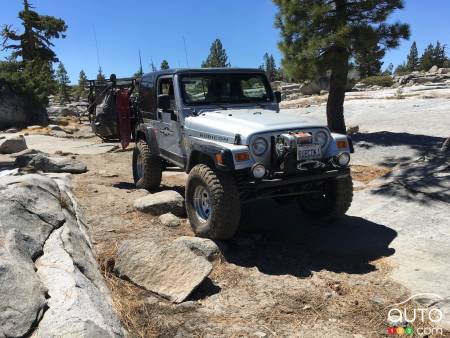 Under the hood, in addition to the now-legendary 3.6L Pentastar V6 (still producing 285 hp and 260 lb-ft of torque), the Rubicon product offering includes an all-new 4-cylinder turbo generating 270 hp but a hefty 295 lb-ft of torque. This engine is also offered with the other Wrangler editions but only with the 8-speed automatic recently introduced by the manufacturer. Take note that the Rubicons available with this transmission, which not only has more speeds for better fuel economy, but simplifies things for off-roading drivers needing to focus on certain tricky manoeuvres. The 6-speed manual gearbox is still available but only in certain version of the Rubicon equipped with the V6.

The Rubicon’s transfer case is still mechanical and it can be placed in a shorter ratio (4LO) to get more power applied to the wheels, on which are mounted big BF Goodrich Trail T/A KO2 tires.

Depending on the version (2-door or 4-door) chosen, the Rubicon can be equipped with a rigid roof, the front parts of which can be easily detached, or a canvas soft-top that can be (relatively) easily removed. Some buyers might opt for the hard top with a canvas surface, which is power-opened. 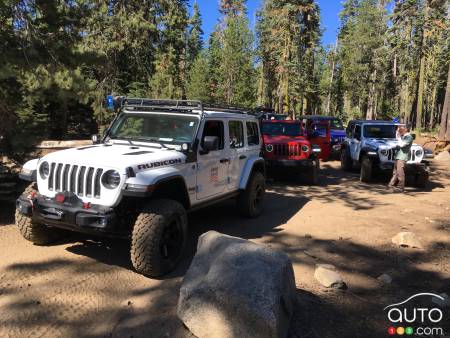 The Wrangler’s redesigned interior now has a central screen for accessing the radio, (available) navigation system and the backup camera, digital instrumentation and a few Rubicon-exclusive commands, like the one to detach the front stabilizer bar when on an extreme excursion, and the one for locking the front and rear differential.

In addition to the front bucket seats for driver and side passenger, there are two seats in back (three on the four-door Unlimited), the backs of which can be folded down for added cargo space. Obviously, the Unlimited has more of that space.

The entire interior space is protected by a cage fully integrated into the design. We should mention that the window can be removed more easily than before thanks to four bolts that are a cinch to remove using supplied tools, stored in the console’s storage bin. Extreme excursion enthusiasts will want to lower this windshield, like the military Jeeps of old. By the way, the rear doors of the Unlimited version don’t offer really access to the rear seats. Getting a child seat in there, for example, would be a tricky operation.

On the road… and the trail!
To be sure, many Jeep Wrangler Rubicon owners will most often use their SUV on the road; they must then accept they have to live with a genuine truck, with a rigid ladder chassis and two rigid differentials less supple than an independent suspension. The Wrangler still has ball steering but is aided by an electric hydraulic pump, there are disc brakes on all four wheels. The most annoying element for on-road drivers may be the sound of the big tires on dry pavement. We should point out that though the BF Goodrich tires are acceptable for winter driving, it is recommended that owners equip the Rubicon with genuine winter tires when the cold season comes. 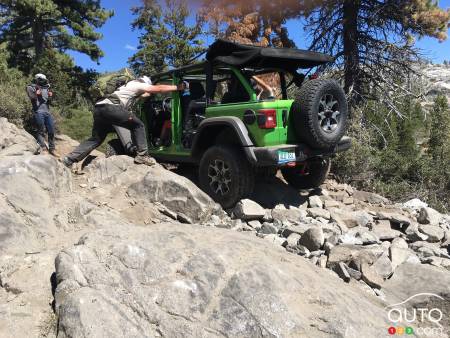 The two-door Wrangler is slightly less comfortable, but its reduced dimensions make it easier to handle in urban situations. As for the performance of the new 4-cylinder engine, it is perfectly at ease powering the Rubicon, giving it more-than-acceptable acceleration and confidence-inspiring passing abilities. Still, even with its greater torque, it doesn’t deliver the same amount of power as the V6, unsurprisingly. It was designed to improve fuel economy. This, however, this wasn’t something we could confirm during our two-day first drive along the trail!

The Rubicon Trail
Jeep’s objective for our excursion was to demonstrate the great capabilities of the 2018 Rubicon on the trail itself, so the company organized various events to suit the “clientele” taking part. In other words, the assembled automotive journalists from across North America traveled the entire length of the Rubicon Trail, the first part of which is the most demanding.

The folks at Jeep also made a point of having us drive Wrangler Rubicon in their natural state, as in, according to factory specs. Except for a few commercially available Mopar accessories added to a few of the models, these Rubicons were the same that buyers get straight off the assembly line! 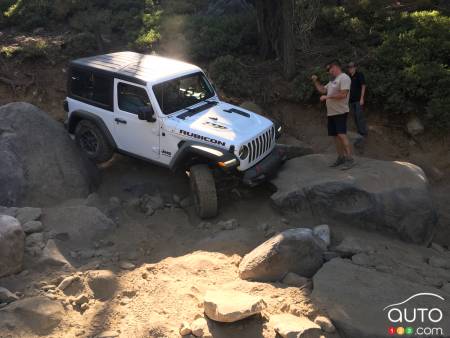 Under leaden skies we headed off on the famous trail, our roofs down but placing our trust in the hands of instructors located at various strategic points to help the drivers overcome challenges (usually at a snail’s pace – keep in mind that you can actually complete the trail faster on foot than in a Jeep!). Each manoeuvre was carefully executed by participants, without anything or anyone suffering any apparent damage!

Well almost. Despite the instructors best efforts, all along the trail could be heard the grinding sound of metal against rock. In the end, other than a few bent or crushed exhaust tips, none of the 20-or-so Jeeps broke down, and not even a tire failed. Jeep’s demonstration was obviously a success.

Lastly, for fans of technical details, we should specify the following: the Wrangler Rubicon has a minimum weight of between 1,580 and 2,040 kg, and the base price starts at $34,945 in Canada. That can rise well above $50,000 depending on the equipment and accessories chosen. If that doesn’t deter you, know that you can get a Wrangler Rubicon at your nearest Jeep dealer right now! 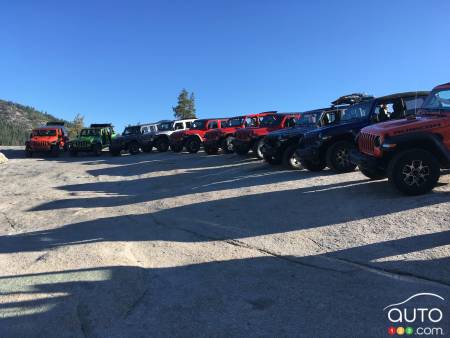 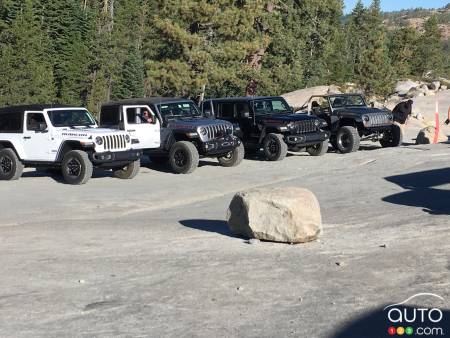 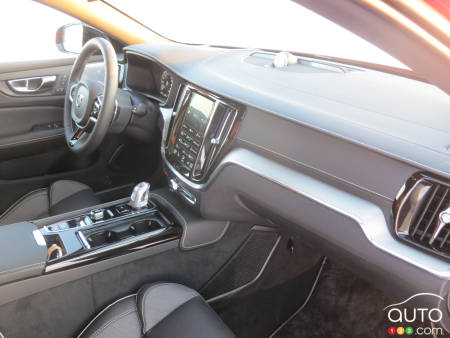 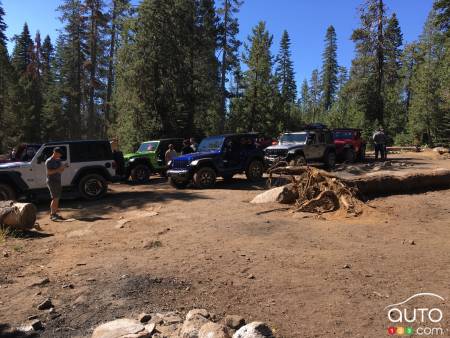 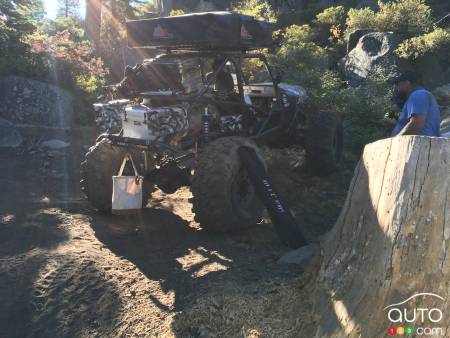 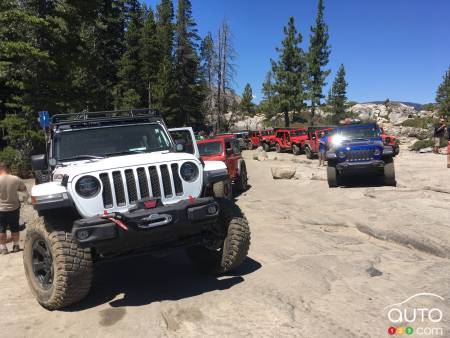 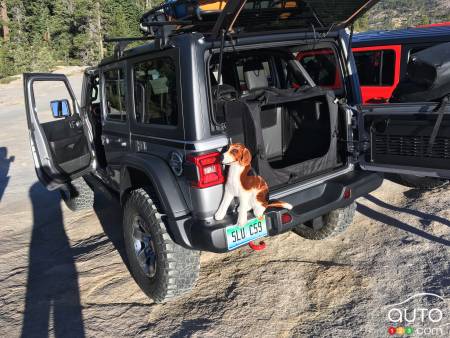 Jeep will soon offer 35-inch tires on select 2021 models, for example with the Wrangler's new Xtreme Recon package. It remains to be seen if this will be lim...

An Xtreme Recon Version of the Jeep Wrangler... Thanks to...

Jeep is adding an off-road package to selected versions of its Wrangler. The Xtreme Recon package has one goal: to make the vehicle more capable than the For...