Oslo, Norway - With a smidgen over 50% of its vehicle fleet consisting of EVs, Norway is currently the country with the highest percentage of electric vehicles on the road in the world. Mazda clearly had this statistic in mind when it chose the Nordic country for an electrical technology forum to present its vision of its first electric vehicle.

The small Japanese company, which didn’t still doesn’t have any electric vehicles on the road in North America, plans to rectify that, and as soon as 2020. It will present a 100%-electric vehicle at the Tokyo Motor Show this coming October 23. Impossible to know for the moment what form this vehicle will take – might it be an SUV, a car or a crossover? We’ll have to wait and see.

A singular approach
For years Mazda has been injecting driving pleasure into everything they build, working to create a symbiosis between man and machine.

This approach was to remain for the creation of an electric vehicle. The creation of a model therefore required much reflection, because by definition an electric vehicle is generally heavy and delivers a drive that isn’t very compelling. The approach to choosing a battery therefore required a different mentality. The electric powerplant Mazda has developed operates on a 35.5-kWh battery. Placed under the floor of the vehicle and integrated into the chassis, it makes for a more-rigid structure and a reduced weight. It will develop 105 kWh (142 hp) and 195 lb-ft of torque. 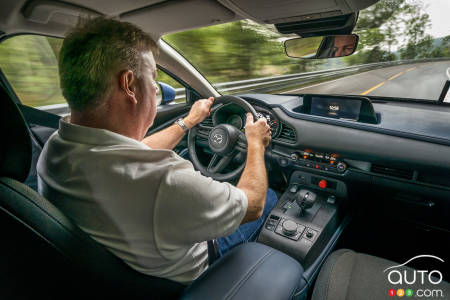 The Jimba Ittai
This Mazda philosophy revolves around the concept of being one with the car. To make a vehicle the extension of oneself, and thus making driving more natural. All this seems a little abstract on the face of it, but concretely, Mazda wanted to eliminate several flaws that tend to reoccur in the majority of present-day electric vehicles.

Mazda thus worked hard to introduce a more-intuitive regenerative braking system. There’s also a torque vectoring system for better handling and Mazda has even added engine noise that goes through the speakers and adds sensory pleasure to the experience. 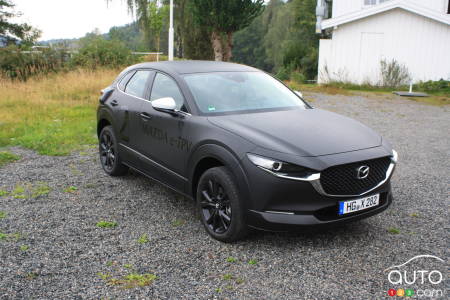 And on the road?
For this test event, Mazda installed the new electric powertrain aboard its new CX-30, specifying that this model will not be the one offered as an all-electric vehicle. Officially, we drove what they’re calling an e-PTV (Electric Prototype Technology Vehicle). The real form of the EV will be presented at the Tokyo Motor Show on October 23.

Mazda officials prepared for us a 40-km circuit on winding roads in the suburbs of Oslo. And what did this trek show us? In a nutshell, this electric vehicle is the most dynamic and the most interesting of its kind that we’ve driven to date.

Mazda found the right recipe to deliver real driving fun, including natural braking that won’t snap your head forward as soon as you lift your foot off the accelerator, and a convincing simulated sound that almost makes you feel like you're driving with a gas engine. It's very discreet, but it’s also very effective. From a dynamic point of view, Mazda can say mission accomplished. The CX30 we drove was a prototype so there are still a lot of adjustments to be made, but the first impression is excellent.

One downside, and it’s a substantial one, is that the engine loses its vitality past 100 km/h. The limited power of the unit doesn’t deliver enough to allow for quick overtaking on the highway. We took care to share this observation with the folks at Mazda, who told us that its engineers are working on this. Here’s hoping the production model has bigger lungs.

Limited range in several versions
While the news is good as far as driving dynamics go, it’s less so in the case of range and battery performance. The final figures for autonomy haven’t been announced yet, but expect it to be about 200 km on a good day (that would be in the summer).

Mazda is employing the reasoning several other manufacturers have in estimating that more than 50% of car owners drive less than 80 km a day, and that a 200-km range will therefore meet their needs. Mazda goes on to explain that in order to create a dynamic vehicle, a battery that’s too heavy will be detrimental to the car’s handling, and that, as mentioned, a smaller battery will leave a smaller ecological footprint.

Although valid in theory, this approach will not be perceived by all as such a good idea. The majority of electric models now arriving on the market have a range of 400 km; it’s clear that giving a new model a 200-km range will handicap it.

Mazda also confirmed that its first EV will be a front-wheel-drive configuration, so no all-wheel-drive - another strike against the company’s future model.

There will be several versions of this model, from a straight-ahead hybrid to an all-electric variant. Mazda has indicated that a small rotary engine will serve as a range extender for hybrid models, and that its format will vary depending on the model (it will be bigger in conventional hybrid models and smaller in plug-in models).

Conclusion
It’s unwise to make any definitive statements when dealing with what is still a prototype. Driving with this powertrain is very inspiring, definitely the high point of our short Norwegian adventure. However, we hope that Mazda will be able to improve the range and give more punch to the engine when moving at over 100 km/h. 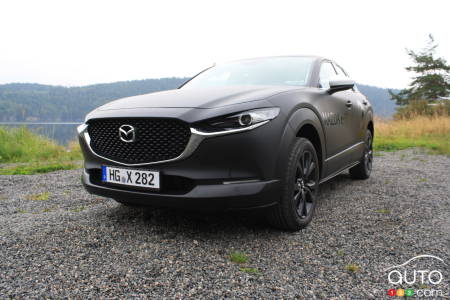 At the Detroit auto show, Nissan has unveiled its IMs, a window into the future of electric – and autonomous vehicles – as imagined by the Japanese automaker...