It’s an odd pair to compare, for sure, but below the surface the Ford Mustang Convertible and Jeep Wrangler Unlimited are very similar machines.

The former is sleek and slim and athletic, while the latter is tall and blocky and boxy. One is a sports car, while the other is a utility vehicle.

Like I said, though, the similarities are striking. Both are among the most instantly recognizable vehicles on the road. Both appeal to enthusiasts with a powerful V6 engine and a 6-speed manual transmission. Both cater to a driver’s sense of adventure. Both make an excellent choice for daily driving as well as top-optional, family-ready weekend fun. Both start in the $30k-$35k range.

Why look at this unusual pair of machines? After several friends and several more emails suggested that the Ford Mustang Convertible and Jeep Wrangler tend to be cross-shopped, a comparison was in order.

Styling and Cabin: The Mustang flaunts a poised stance, athletic silhouette, tight skin, and collection of instantly recognizable visuals. Don’t miss the sequential rear turn signals or the scowling new fascia. The fabric top folds away neatly for a clean and finished look. On board, expect a quality build feel, effective use of premium materials, and a highly modernized design complete with slick interfaces, unique switches and dials, and great use of contrasting colours and textures. The Mustang still feels smaller inside than it looks, though, and may prove cramped when some families are on board in their entirety. Going topless is a cinch — just release two levers and press a button.

The Drive: The Ford Mustang Convertible feels honed, dialed-in, and calibrated for all sorts of driving, with a durable and dense feel on rough roads, minimized body jiggle typical of convertible cars, and a steering system that’s quick and playful. The 3.7L engine pulls eagerly to high revs and works with a pleasing howl. The clutch and shifter offer plenty of bite and a slick, heavy shift action, respectively. Here’s a car that’s just as happy being driven spiritedly as it is on a relaxing Sunday cruise. The Mustang’s reflexes have evolved into top-notch territory thanks to an all-out engineering assault on slack and slop for the latest generation. It’s a pleasing machine to drive gently, hard, or any way in between.

Safety: Neither the Mustang nor the Wrangler have achieved top safety scores from the IIHS, although the Mustang’s HID lighting system, superior handling, and automatic post-crash SOS system help boost confidence for safety-minded drivers.

Utility: The Ford Mustang Convertible’s significantly smaller trunk and storage compartments mean passengers will need to pack lightly and carefully, especially if four people go along for the ride. If not, the rear seats can carry a few more bags. Those spending extended periods away from home, or camping, may wish for more cargo capacity.

Conclusion: The new Mustang Convertible’s great looks, sharp handling, worthy powerplant, and instant recognition create a sporty daily driver that’s ready for weekend cruising with the family and a little bit of their gear. As family-capable sports cars with fantastic manners go, this is one of the market’s best values.

Styling and Cabin: The Wrangler’s look is one of the most distinctive on the road, even from a distance, thanks to its slotted grille, round headlights, and squared shape. Expect the “Jeep Wave” from fellow drivers. Like the Mustang, the Wrangler effectively employs signature styling elements, although it’s more utilitarian and less handsome in appearance. On board, it’s an updated take on a simple design. The Wrangler’s tall, thin dash, high seating position, and signature cabin looks blend with recently updated materials, controls, and trimmings, as well as many delightful graphical touches that reference the brand’s heritage.

Obviously, the Jeep Wrangler Unlimited’s interior space and utility blow the Mustang out of the water, with two more doors, easier rear-seat access, and greater spaciousness, although taller rear-seat passengers will find headroom to be tight due to the overhead roll bar. Going topless in the Wrangler is more labour-intensive as top segments need to be removed manually and stored.

The Drive: Despite the 3.6L V6 producing 285 horsepower, lazy throttle programming sees the engine prefer to dawdle along at lower revs, where torque is adequate and operation is relatively quiet. The Wrangler can’t match the Mustang for handling precision, acceleration or steering feel, but proven capability and 4-wheel drive open the door on an entirely different performance dimension on the road less travelled.

In the rough, expect confidence-inspiring ride quality, traction galore, and the ability to explore most if not all terrains with little second thought. It’s a different sort of performance and fun than the road-focused Mustang offers, but the Jeep Wrangler is still a hoot. Some shoppers will wish for a more comfortable ride on rougher roads since the truck-like suspension is designed for durability first and comfort second.

Safety: Like the Mustang, the Wrangler’s crash-test ratings are far from the industry’s highest. It also lacks numerous innovative and effective safety systems that are available or standard on the Ford. Safety-minded shoppers may count this as a strike against the Wrangler.

Utility: More space, a square-to-the-edges design, and plenty of flexibility via its folding rear seats make the Jeep Wrangler Unlimited this comparison’s cargo-hauling winner by a hearty margin. You can maximize its cargo capacity by packing gear into square bins and boxes. What’s more, the Wrangler can get families to more places than the Mustang and also bring more cargo and gear along for the ride. Best of all, even though its roof panels can be removed, roof-mounted gear carrier options are still possible (mounted to the roll-bar cage).

Conclusion: The Jeep Wrangler Unlimited’s value as a year-round adventure vehicle is undeniable. Though its on-road performance and looks fall short of the Mustang’s, more generous cargo space and access to the world of weekend off-roading make the Wrangler a better fit for families who frequent cottages, lakes, and trails. 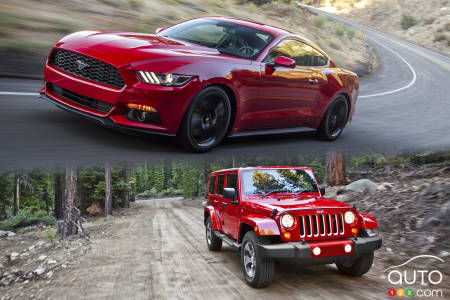 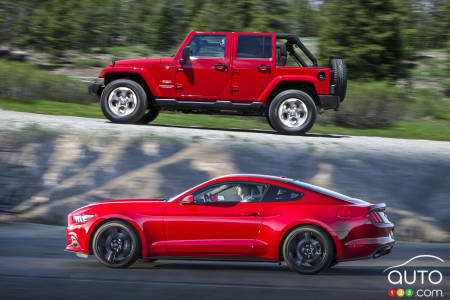 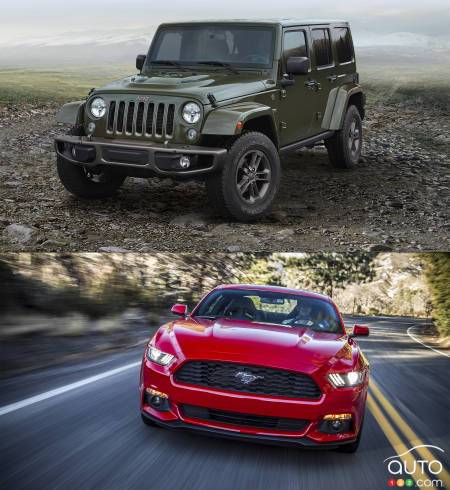 The revised 2018 Ford Mustang and Mustang Convertible were unveiled earlier this month and will go on sale later in 2017. Here are the top 10 things you need...