Today, sitting on the steps of my front stoop, my young assistant Emiliano and I do a closer analysis of the Kia Niro EV sitting a few feet away from us in the driveway.

It's a beautiful day, not a cloud in the sky. 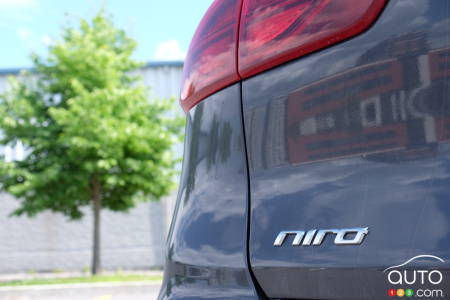 My 11-year-old neighbor, a devoted car enthusiast, has sheets of notes on his lap. He takes his job seriously. When I asked him a few days ago to scour the Web for the history of the Niro before analyzing its technical specifications, I knew I wouldn't be disappointed.

“So, Emiliano, what did you learn?”

That question presses the right button. And so he begins.

“Kia first introduced the Niro to the public at the Chicago Auto Show in February 2016.”

I immediately interrupt him. “Was this the production version of a prototype unveiled before?” 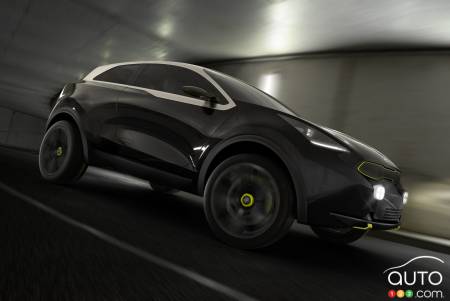 He answers matter-of-factly, non-plussed well beyond his years.

“Yes. The Kia Niro Concept was shown at the Frankfurt Motor Show in 2013, so three years earlier. It was a pretty cool prototype because its two doors opened like gull wings.”

Emiliano hands me the picture he printed up at home. Even though it's small and in black and white, you can clearly see the concept of a new urban crossover.

“But those aren't seagull wings,” I say. “Those are elytra doors.”

I explain: “The gullwing doors open from the roof and perpendicular to the body. It was really the 1954 Mercedes-Benz 300 SL that popularized this kind of spectacular configuration. They remain the exception today, but you can find them, for example on Tesla's Model X. Elytra doors, on the other hand, lift up more on the sides, like scissors. They're called elytra after the wings of some insects.” 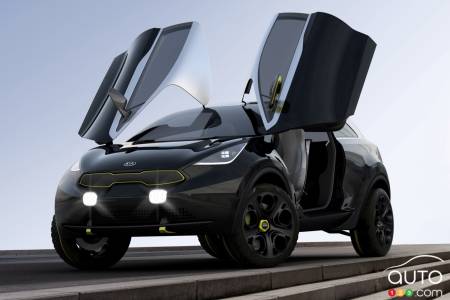 Photo: Kia
The elytra doors of the Kia Niro Concept, 2013

“Anyway, when Kia released the Niro for good in 2016, it was a hybrid model. The next year, they launched the plug-in version. And in 2018, it was the turn of the 100-percent electric version, the one you're testing right now.”

“Wow”, I exclaim, “they've gone all out! In other words, the consumer considering the Niro has a choice between a regular hybrid, a PHEV and an EV.”

“Right. I went to the Kia Canada website. The cheapest hybrid model sells for $28,755 and comes in three trim levels: L, EX and EX Premium. The plug-in hybrid starts at $37,905 for the EX version - there's also the SX Touring. And then there's your all-electric, which starts at $46,905.” 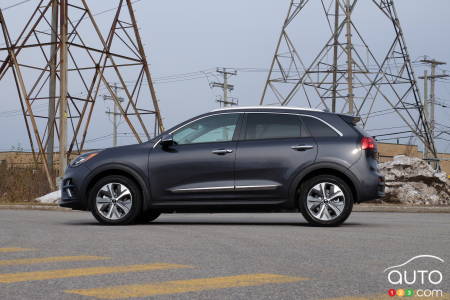 “But do you think that the differences between the EX and SX Tourism versions are worth the $10,000 difference?”

I put on my veteran journalist’s hat: “Off the top of my head, I can tell you that the top-of-the-line version includes little treats like the power sunroof, the steering wheel and all the seats - front and rear - heated, the superior harman-kardon sound system and more driving aids like the one that detects other cars in your blind spots and the lane-keeping assist that provides you with the embryo of autonomous driving.

“Are we talking about the same range for both versions, though?”

“Absolutely. The manufacturer says we'll be able to drive 385 km on a single charge.” 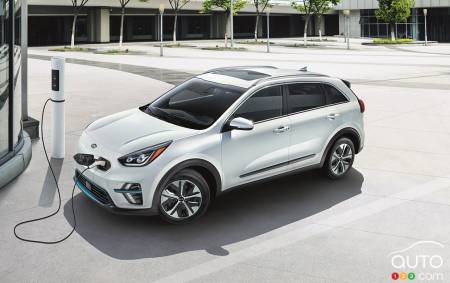 “So am I, but we'll have to wait a while to see for ourselves.”

“But, why would you say that? You’ve got the Niro now!”

“I know. But I'll have to put it aside for a few weeks while I test-drive some other vehicles with my colleagues for the L‘Annuel de l’automobile book. The 2022 edition will be in bookstores soon and I need to complete more test drives to finish the book.”

“Does that mean the Niro EV will sit around here doing nothing?”

“Not at all”, I reassure him. “I'm passing it on to my colleagues at Auto123, the website that publishes my long-term reviews. They’re also eager to get to know this EV more in depth. They’ll be taking over and writing the next four chapters of our long-term review. When I'm done with L'Annuel, I'll get back to the Niro and my series of articles on it for Auto123. But until then, don't miss any chapters of this long-term review. You'll see, the folks there are almost as good as the two of us.”

Auto123 puts the Kia Niro EV to the long-term test. Today, part 5, in which we pile up the questions as we rack up the kilometres. You guessed it, those ques...

Auto123 puts the Kia Niro EV to the long-term test. Today, part 1: the carmaker, the reviewer and the (young) enthusiast.