I still remember the first time I got the chance to test drive this weird cross between a rally car and an urban crossover. It was a few years ago, during the annual AJAC TestFest, and it was an unforgettable experience!

The Mercedes-Benz GLA 45 AMG, as it was called then, had been placed in a category with a bunch of luxury SUVs, each bigger than the next. With its dry suspension, raised spoiler and output of 355 hp, it was without question the black sheep of the group.

The organizers of that event had made available an off-road section for all the SUVs of the category, and even the GLA was expected to have enough ground clearance to complete the obstacle course. I have to admit I found the exercise a bit silly, so I opted instead to take the GLA 45 on to a closed section of road reserved for the performance cars. The official who greeted me said, “well that’s the first time this week I see this model on the road, and I’ve been here for three days”.

No other AJAC member had thought it worthwhile to test the smallest SUV produced by AMG on this asphalt surface. So maybe I was bending the rules a bit, but the high-performance nature of this A-Class compelled me to do it. The GLA 45 is technically a utility model, but the way I see it, it has more in common with a super-sporty compact car than any rugged or family SUV that I know.

This time, in my second go-round in what is now called the Mercedes-AMG GLA 45, my first impressions were confirmed.

A convincing mug
I admit it, the GLA 45 speaks to me, and this despite its phony rugged SUV appearance. The vehicle may sit higher off the ground than the A-Class sold in Europe for the past few years (and now coming to Canada), but for me it’s really a ‘high-altitude’ A-Class – even if the design is different. With its 20-inch wheels – yes, 20! – the GLA 45 looks like a modified sports car, with only slight exaggeration. The black plastic mouldings are there so that you can technically call it a crossover, and I confess that the changes brought to the front end (in the form of a mesh grille) give the model a meaner disposition.

In back, the rabbit-ear position lights are a bit too imposing for my taste, but hey, that doesn’t stop the GLA 45 from being an attractive proposition for performance fans. The dual exhaust pipes integrated in the diffuser and the spoiler that spans the top of rear window are just some of the elements that say ‘hi there’ to driving aficionados.

An AMG interior
The AMG treatment is apparent throughout the interior as well; the air vents on the dashboard are dressed up in red, and there’s that plastic panel in front of the driver that showcases those geometric shapes. The steering wheel is definitely from the AMG toolbox, and just gripping it gives you a sense of the potential abilities of this sportiest of SUVs. The seats are more enveloping, even if there is a superior option, and the gear knob is placed between the two front-row occupants, unlike what you find in the brand’s more-civilized luxury models. Driving position is excellent, but visibility out the back is not. To be fair, this is a criticism you can – and we do! – level at an ever-larger number of models these days!

I was also able to determine that the GLA – whether AMG or not – is no family utility vehicle. Just to belt up my two little monsters in the second row, I had to advance my driver’s seat to get sufficient access. And don’t even think of transporting three adults back there – that middle space is just much too narrow.

At the wheel
When the GLA 45 made its debut on the Canadian market, the output of the 4-cylinder turbo engine was 355 hp. Since then, AMG’s engineers have added 20 additional horses to the equation. The 2.0L bloc thus holds on to its title as the world’s most powerful 4-cylinder engine in a production car. Consider that this little urban SUV has nearly as much punch as the first Dodge Viper, considered an exotic sports car at the time!
On startup the exhaust system makes an immediate sales pitch: this “SUV” sounds like a modified sports car… or a rally car. You decide! The rumble can even be amplified via a button found close by the gear knob. Meanwhile the switch for changing from Comfort to Race drive mode (there’s also Sport and Sport+) allows you to transform the car’s personality instantly. As you would imagine, Comfort mode is perfect for city driving; the 7-speed dual-clutch automatic transmission seeks out the best gear to maximize fuel economy. But as you climb through the modes, the more the engine’s RPM climb as well, giving you the impression that you may have forgotten to change the gear at low speed. The GLA 45 also enable the driver to change gears manually using the paddle shifters mounted on the steering wheel.

In Race mode, accelerations are downright breathtaking, in fact I think it’s not really appropriate to be used on public roads. I recommend you save this mode for when you venture on to a track, though realistically I know that few buyers of this model are likely to ever get near one. Braking is at the level you would expect from the AMG division, while the suspension (which also changes depending on the drive mode chosen) can become problematic on our time-worn and weather-battered roads. In my case, a back injury forced me to soften up the suspension more often than I normally would. On this subject, the 19-inch wheels are a smart option for those who a little more smoothness from their ride.

The last word
Still to be determined is whether all of this wonderful madness makes the $52,300 price tag for the base model of the GLA 45 worth it (our tester had added equipment and came to $62,500). In the small luxury SUV segment, the AMG version of the GLA is all on its own. The only car that approaches it comes courtesy of Ford and carries an RS badge. But then, the Focus RS is on the verge of leaving us, which explains its ridiculous current base price.

Obviously, the Mercedes-AMG GLA 45 doesn’t target the average consumer. But for some, perhaps many, this high-riding compact car’s super-firm driving dynamics make it the car to get. And in that case it really doesn’t matter if you prefer to look at it as a sporty SUV or a compact sports car in disguise! 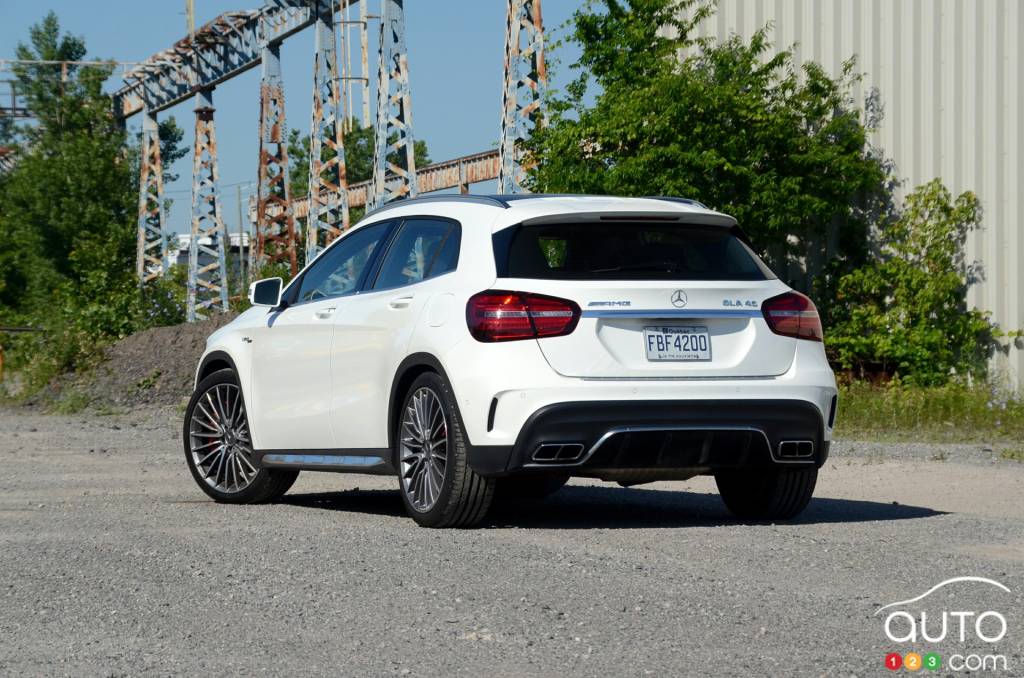 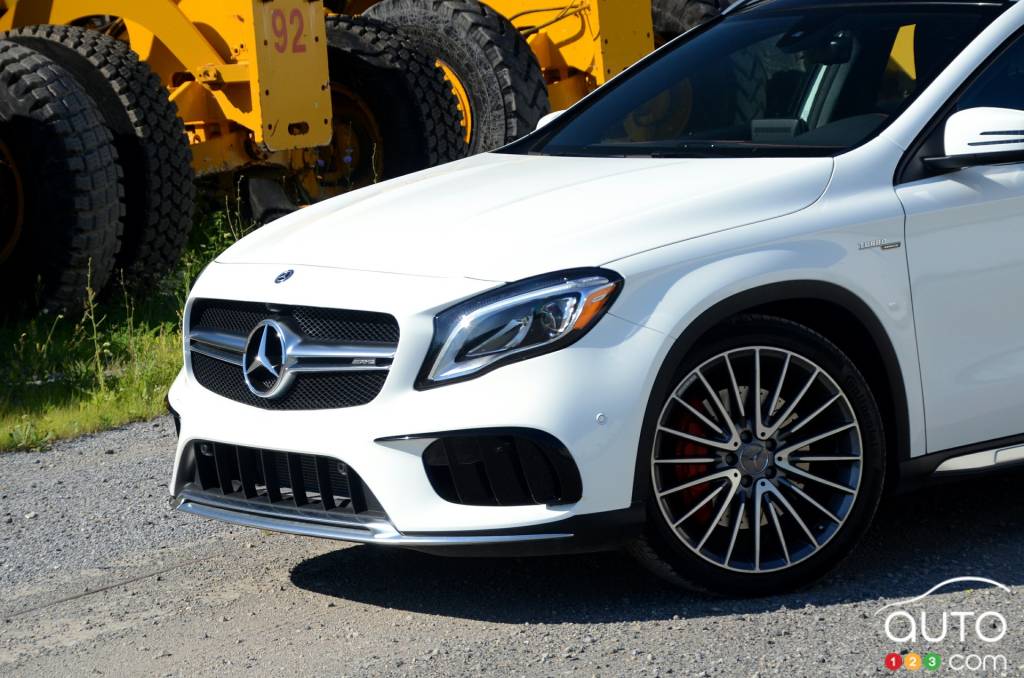 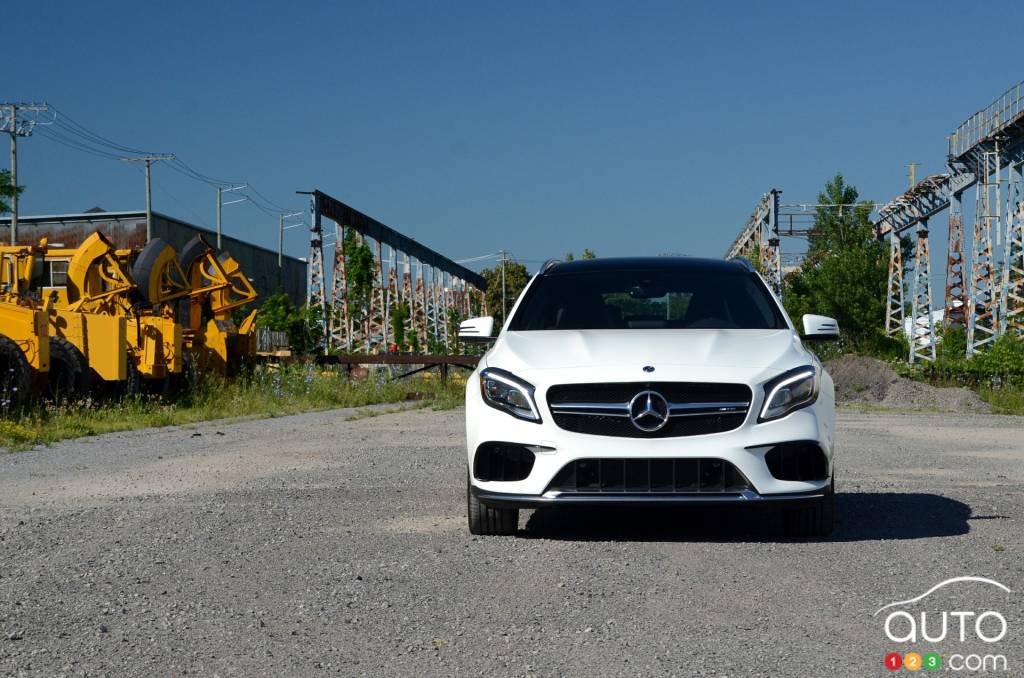 Photos:V.Aubé
Photos of the 2018 Mercedes-AMG GLA 45
See the complete Gallery

After sending out a number of short teaser videos, Mercedes-Benz has finally put on the official in–the-flesh launch of the very first model under its EQ ban...

Articles By
Vincent Aubé
All-New 2022 Volkswagen Taos To Get an All-Ne...
Article
Polestar Confirms Production Version of the P...
Article
75 Percent of Reservations for new Bronco wil...
Article
More from this author