There are worse ways to spend a long weekend than on the road in a Cadillac SUV, especially one that isn’t the gas-guzzling Escalade. Not needing all of the space that large luxury people-mover provides, I was fortunate to be able to pick up the reasonably sized 2018 XT5 crossover (I had the top-end Platinum edition to boot) for my weekend run through the mountains of New Hampshire under gorgeous summer skies. Here’s how that went.

The 2018 Cadillac XT5 is actually the second time around for the model that debuted as a brand-new thing in 2017, replacing the SRX. It’s a five-seat mid-size SUV fitted with the same 310-hp 3.6L V6 that powers the ATS, CTS and CT6 sedans and an 8-speed automatic transmission, riding on 20-inch wheels (in the Platinum; others get 18-inch wheels). In the XT5 this powertrain comes fitted with the consumption-reducing cylinder-deactivation system that shuts down two of the cylinders when not needed during highway cruising. It’s also lighter overall than the 2017 edition, plus it features stop/start technology as a standard module, further improving fuel economy.

Road-tripping in style
No question, heading out on a road trip in a luxury model designed for maximum comfort and high-level performance is never a bad idea. And clearly, a model like the Cadillac XT5 will get nods of approval wherever you take it; it’s well built, it’s attractive and it’s got the Cadillac name on it. But I wanted to see if those luxury elements really helped make a 1,000-km trip more pleasant and restful, and if they justify the price tag. 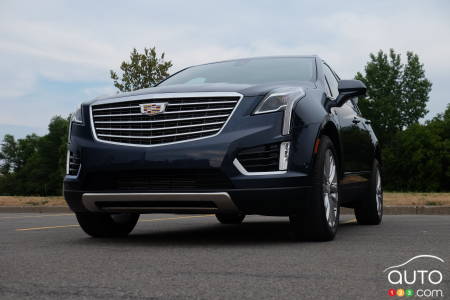 For starters, I found the driver’s seat to be highly comfortable, thanks in part to the 8-way power adjustable system built into it, and which includes lumbar support. My front-seat passenger did find the seats a little on the hard side, but she admitted to having a preference in general for plusher cloth-covered seating. As expected, the ride delivered by the XT5 is exceptionally smooth, and exceptionally quiet.

Cargo space behind the rear seats is quite vast, particularly for a mid-size crossover; seats-up capacity is 849 litres, and 1784 with the second row folded down. We had far more than enough room for our bags and various other stuff. You could fit three full-size suitcases in there and have room left over for a kitchen sink.

A well-being generator
Our trip involved heading from Montreal down to the Vermont border and then into New Hampshire and a drive through the picturesque White Mountains region. Once across the border, the states of Vermont (speed limit: 65 mph/105 km/h) and New Hampshire (70 mph/113 km/h) lay ahead, giving me the opportunity to see just how much well-being this XT5 could instill in me compared to my own ho-hum compact SUV!

First order of business was activating the adaptive cruise control. I’m already sold on this technology, which automatically keeps the vehicle at a safe distance from those in front and resumes the set speed when the coast is clear; but it truly becomes a godsend when you can drive a two-hour stretch of road while hardly ever applying pressure on either pedal. 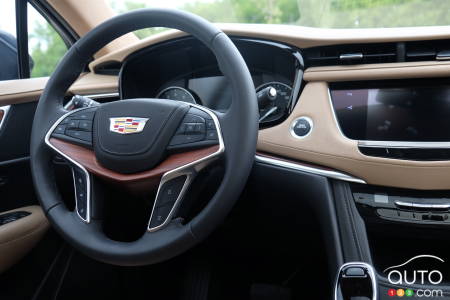 As for that cylinder-deactivation system, though I did see it kick in sporadically (there’s a handy indicator on the central instrument cluster that shows when it’s activated), it worked mainly when I drove at or around 90-100 km/h. At 115 km/h it continued to call on all cylinders, perhaps due to the mountainous terrain that required the engine to work harder to maintain the cruise-control speed. Whatever speed I drove at, the ride remained refined, the sound level wonderfully muted. Climbs meant nothing to the XT5 and its V6, as it effortlessly kept to the set speed.

A word about the dashboard; I found it generally quite well laid out, the 8-inch touchscreen commands practical to navigate, the driver’s instrument cluster easy to personalize. But why oh why is there no knob for the audio system’s volume? There’s a command on the steering wheel, yes, but otherwise you need to use the touchscreen, which doesn’t always respond immediately, then does belatedly and you realize you’ve cranked up the volume to ear-splitting levels or taken it down to zero. Argh. Knob please. Preferably down near the gear shifter where the driver’s right hand naturally rests.

That wasn’t nearly enough to knock me off my well-being horse, mind you. Both the first leg and the return home were completed in blissful quietude and smoothness. The ride itself was complemented by interior amenities. Storage space is generous and well-conceived in both rows, the climate control is three-zone so everyone can get to their sweet spot, and the built-in navigation system got us to our destination without any hiccups. Ok, I did have my brother using an actual paper map from the back seat (rockin’ it old school!), but the only time we did go astray it was because he wouldn’t trust what the nav system was telling us! Chalk one up for technology. 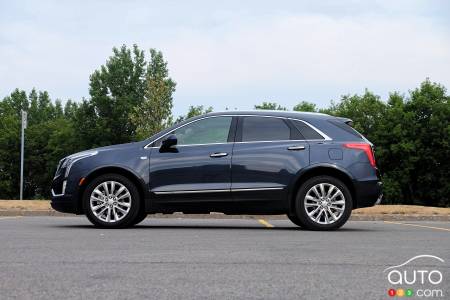 My well-being was further enhanced when I checked the tally for fuel consumption at the end of it all: 1,060 km driven, most of that highway, gave me 9.1L/100km. For a V6-powered luxury utility model, that’s just fine by me. But perhaps most importantly, I felt relatively rested, even after disembarking after a five-hour drive. Now I can tell you that after even 2-3 hours in my own SUV, I’m usually ready for a massage and a nap, so this was quite remarkable, and actually measurable. I couldn’t help but conclude that the XT5’s smooth ride, comfortable seating, adaptive cruise control, good sightlines and other assets had indeed combined to put much less of a strain on my body and mind.

The Platinum
As mentioned, my tester was the Platinum edition, which comes with standard all-wheel drive. It also sports a unique chrome front grille, its 20-inch wheels are of polished aluminum, and the back end gets rear skid-plates. The seating, armrests and door trim are Semi-Aniline leather. Front seats are heated and ventilated, the two outer rear seats are heated, and the head-up display and aforementioned tri-zone climate control system are added as well. Even your head gets special treatment: the headliner is covered by microsuede.

Overall, four trims of the XT5 are available for 2018: the base version, the Luxury, the Premium Luxury and the Platinum. The sunroof, leather seating and 4G LTE internet access kick in with the Luxury version, as do safety assist functions like Front and Rear Park Assist, Lane Change Alert with Side Blind Zone Alert and Rear Cross Traffic Alert, heated steering wheel, heated outside mirrors and 18-inch aluminum wheels. LED headlamps, embedded navigation system, 14-speaker Bose premium audio system and the more comprehensive Driver Awareness Package of safety systems are added from the Premium Luxury edition upwards. 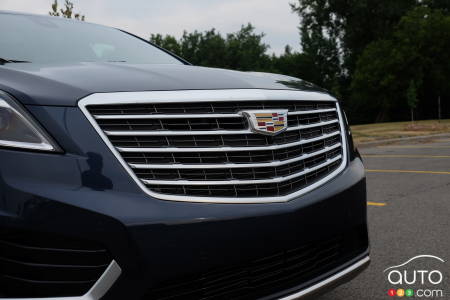 The base model carries a starting MSRP of $49, 375, and that increases significantly as you climb up the trims to the top-end Platinum, which starts at $71,460. That’s a wide range, so you’ll have to think carefully about which extras mean enough to you to make the extra cost worth it.

What it’s up against
The main competitors for the 2018 Cadillac XT5 luxury crossover are the Lexus RX, Acura MDX, BMW X3, Audi Q5, Lincoln MDX and Volvo XC60. Take note as well that Cadillac will soon be adding the brand-new 2019 XT4 to its roster; smaller than the XT5, that model will slot in below it in the automaker’s lineup.

Minuses
Ordinary accelerations
No audio volume knob!
Gear knob is kind of non-intuitive, hence annoying
Rear-seat headroom only average
That price tag spikes alarmingly as you head up the trim levels
The range that the cylinder-deactivation system actually works in is disappointingly narrow
Even the Platinum edition came with fairly non-descript wheels 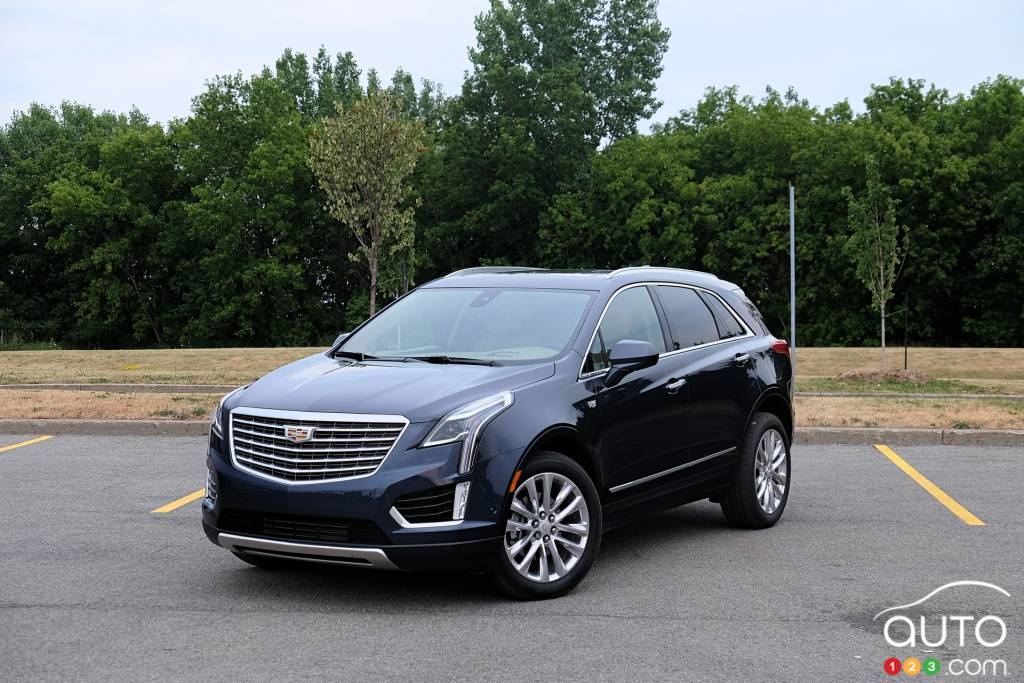 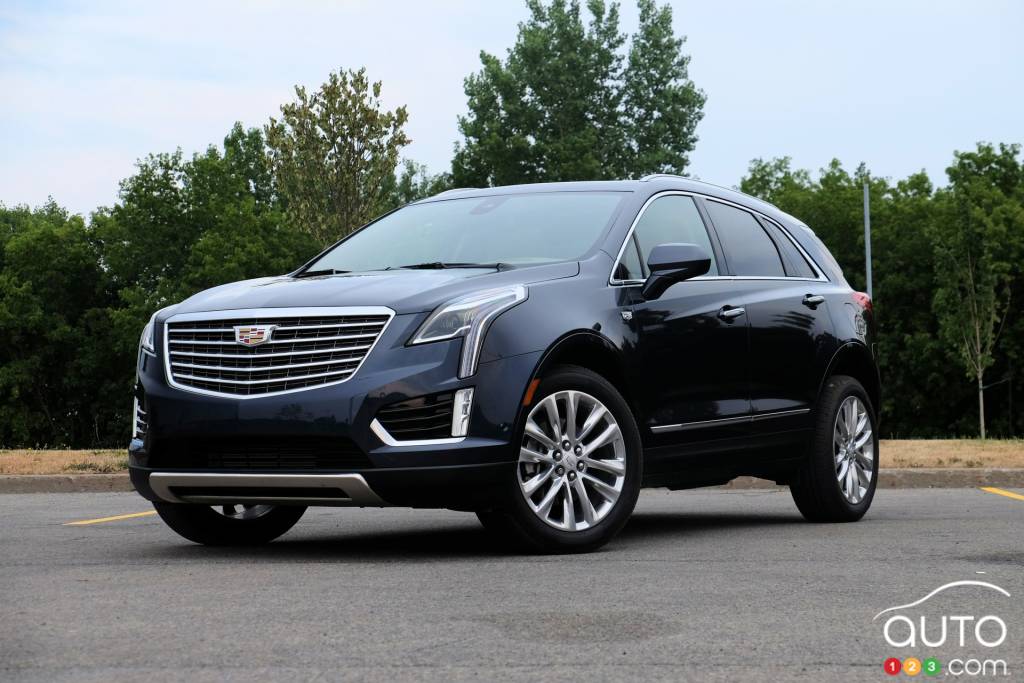 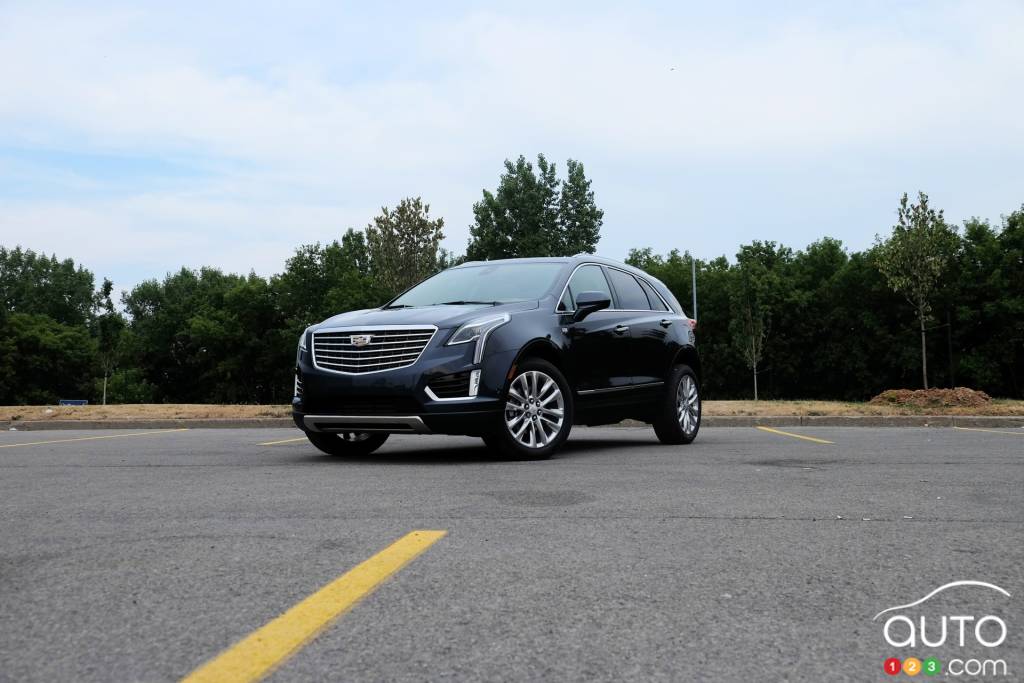 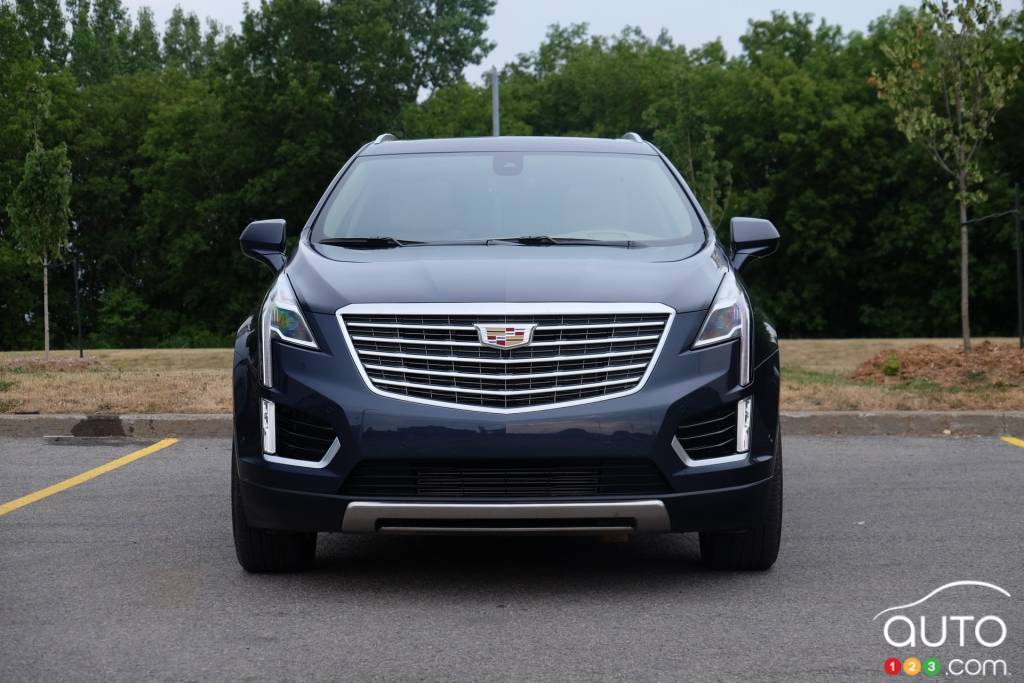