After sending out a number of short teaser videos, Mercedes-Benz finally put on the official in–the-flesh launch of the very first model under its EQ banner. The Mercedes-Benz EQC got its world premiere in Stockholm, almost two years after the concept version was first shown at the Paris auto show.

The EQC is to be the first of some 10 electric models to be produced by the automaker under the EQ flag by 2022. It will have a range of 450 km, according to provisional figures resulting from European testing.

The design
The EQC is a crossover sporting a fairly straightforward SUV design, but with an extended roofline and window layout with a low waistline and a coupe-like roof recess at the rear for an SUV coupe-like feel.

The LED headlights dominate the front end and are tied via a thin, lit-up bar that spans the front hood; the same design governs the rear lights, also LED. The Mercedes-Benz badge on the front grille is also lit up, and contrasts strikingly with the black panel grille itself. The interior
The design of the interior is inspired, says Mercedes-Benz, by the world of consumer electronics. The automaker cites, for example, the ribbed edge of the instrument panel, which resembles the cooling ribs of a hi-fi amplifier. The instrument panel is designed as a driver-oriented cockpit. The typical Mercedes-Benz wing profile is asymmetrical, with a "cut-out" in the driver area. This is where one of the visual highlights of the cockpit is located - flat air vents with key-shaped, rose-gold coloured louvres.

The tech
The automaker has put all the latest-generation drive assist systems it could think of into its first EQ-branded vehicle. These include, in the Intelligent Drive package, new functions such as predictive speed adjustment when approaching busy traffic: when congestion is detected, Active Distance Assist DISTRONIC reduces the speed to around 100 km/h as a precaution.

Note that the vehicle structure of the EQC has been adapted to suit the special requirements of the electrical components and battery, and is configured to achieve a high safety level. The MBUX multimedia system also features several EQ-specific functions, such as the display of range, charge status and energy flow. The EQ-optimized navigation, driving modes, charging current and departure time can also be controlled and set via the MBUX system.

The powertrain
The EQC features an all-new drive system with compact electric drivetrains at each axle. These give the EQC the driving characteristics of an all-wheel drive vehicle. To reduce power consumption and increase dynamism, the electric drivetrains are configured differently: the front electric motor is optimized for best possible efficiency in the low-to-medium load range, while the rear one determines dynamism. Together, they generate an output of 300 kW (402 hp) and a maximum torque of 564 lb-ft (Mercedes-Benz does say these are preliminary figures).

The EQC supports its driver with five driving programs, each with different characteristics: COMFORT, ECO, MAX RANGE, SPORT and an individually adaptable program. 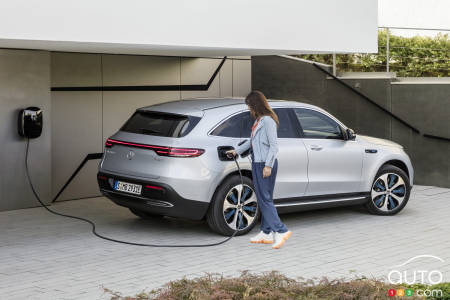 The ECO Assist system gives the driver comprehensive support when driving predictively: by prompting the driver when it is appropriate to come off the accelerator, e.g. because the vehicle is approaching a speed limit, and with functions such as coasting and specific control of recuperation. For this purpose, navigation data, traffic sign recognition and information from the intelligent safety assistants (radar and stereo camera) are linked and processed.

Charging
The EQC is equipped with a water-cooled onboard charger (OBC) with a capacity of 7.4 kW, making it suitable for AC charging at home or at public charging stations. The automaker promises that on certain rapid charging stations the battery pack can be recharged to 80% capacity in around 40 minutes.

Production of the EQC should get underway in 2019 at the automaker's plant in Bremen, Germany, and we hope to see the first units appear at Canadia ndealerships early in 2020. 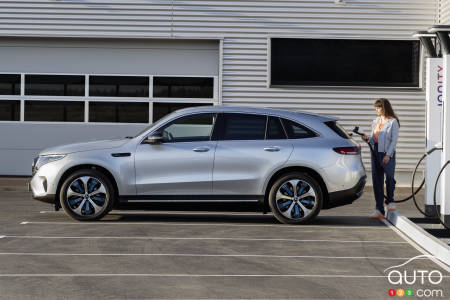 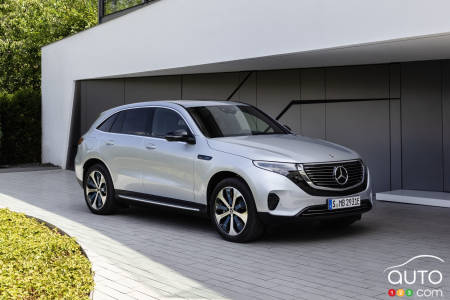 Cadillac president Steve Carlisle told dealers the company will unveil its all-electric-crossover this coming in April. The obvious choice for a launch of th...

More Beef on the Bun and a Roomier Interior for the Next ...

Mercedes-Benz presented the (online) world premiere of the second-generation 2021 GLA. The small SUV gets a bigger engine and more interior space thanks to a...