First things first, and it’s a point that provides perhaps one of the biggest selling points for the 2018 Volkswagen Beetle convertible, before you get into any further detail regarding looks, performance, practicality or anything else.

And it’s this: if you’re looking for a relatively affordable drop-top car, the Beetle convertible has very little competition in cold-weather Canada. You could look at the MINI convertible, maybe the Fiat 500C, and… well that’s pretty much it, at least in the category of cars that won’t leave you penniless.

This makes the qualities of the 2018 Beetle convertible, of which there are several, shine that much brighter. For a reasonable starting price of $25,895, you get a car that offers pretty lively, VW-esque performance, decent interior space (for the front passengers anyways) and a fun retro-style-but-decently-tech-equipped dashboard/console.

As the chances are good, especially in our northern Canadian climate, that this would serve as your second car, that price tag makes a ton of sense. The 2018 Beetle convertible might not be quite practical enough to suffice as your primary mode of transportation – and I’ll get into why further down – but it sure is a ton of fun to drive around topless (the car, not you) when the weather permits.

The current generation of the Beetle is actually the last of the model before it gets axed by the manufacturer. Volkswagen confirmed back in March that it won’t be renewing the latest incarnation of the famed model, which has seen its sales drop precipitously in recent years. That may dissuade you from considering buying a current Beetle; then again it may do the opposite and make you want to get one while you still can. Of course, given the nature of the automaker mind, and seeing as how the Beetle nameplate has already been brought back to life more than once since its 60s heyday, it would hardly be surprising to hear of a planned rebirth before the ink is even dry on this generation’s death certificate. We’ll see…

The 2018 edition of the Beetle comes in three flavours: Regular, Coast and Dune. The Dune version comes with higher ground clearance via a raised suspension and special badging on the flanks. The regular edition can be had in either S or SE trims, while the limited Coast edition is new for this year, takes the retro angle a bit further and is distinguishable right out of the gate by its cool old-VW hubcaps. This is the version I drove for my road test.

All versions come with the same new 2.0L 4-cylinder engine that replaces last year’s 1.8L version. Power is unchanged, at 174 hp and 184 lb-ft of torque, but the powertrain is more fuel-efficient. By the way, in comparison the similarly-priced MINI convertible delivers 134 hp, and the Fiat 500C tops up at only 101 hp! This car provides pretty decent power for the money, in other words. Buyers have only one choice for the transmission, a 6-speed automatic.

Top up, top down
Trying it out with the top up to begin with, I found headroom to be sufficient sitting on either side of the central console. Visibility out the back is not great, however, due to that postage-stamp sized window in the canvas roof. Once on the road, and particularly out on the highway, I was surprised by the quietude of the cabin environment. I had been expecting a howling cacophony of noise, or at least a steady whistling that would make it pointless to keep the radio on, but in fact it was as quiet a ride as if I were in a hard-top Beetle. Typically solid VW construction.

Of course, the fun begins when you push the button to get that roof off. By the way that process takes all of seven seconds or so - another thing that made me quite happy. Though not as happy as feeling the sun beat down on me! The temperatures were not quite fully summer-like when I tested the Beetle out, but a little jacket was sufficient for me to spend a good part of the week with the top down.

The model I tested came with an optional piece of equipment worth considering. The wind deflector is kept in the trunk, and you simply unfold it and fit it into the holes placed on each side of the car, over the back seat, then pull up the half that will sit vertically and help cut down on curl-back winds that often cause people the most annoyance when driving at speed. It worked well enough, though I found what really made the difference for that was to raise the windows when on the highway.

Four-passenger in name only
Though the Beetle comes advertised as a four-passenger coupe (it’s got two doors and four seats, so, yeah), two of those passengers better be pretty minuscule if you don’t want them complaining after 15 minutes or so back there. The legroom is not even the biggest problem actually, it’s that the angle of the back seats is not vertical but pushing slightly forward – and they’re not adjustable since the folded-up roof is sitting there behind them, immovable. And if you install the aforementioned wind deflector, you lose that back seat completely.

Don’t look for the engine in back, in the style of Beetles of old. That is now in front. Rather, open up the rear trunk and you see a pretty modest cargo space. I didn’t get the chance to try the old hockey bag test on it, but from the looks of it would have taken some pushing and shoving to get it in there. There is a narrow opening through the back seats to allow for placing some longer objects.

Tech
Volkswagen has found a reasonable compromise when it comes to including the right amount of tech, without losing sight of the fact that a model like this plays on nostalgia. So the dashboard is fairly simple in design and accoutrements, but includes most of the modern necessities you want and expect in a new 2018 car. The Coast version I drove also had the available premium Fender audio system, which really did justice to the Beach Boys songs I blasted as I headed to the beach, my surfboard jammed into the back seat and rising up into the sky (I didn’t really do that).

You also get a rearview camera, front and rear parking sensors, a good-resolution screen (6.3-inch on my Coast version), Apple CarPlay and Android Auto compatibility, etc. My tester had blind-spot monitoring and rear cross-traffic alert, but it did not (nor do any of the Beetle trims) have forward collision warning, automatic emergency braking, lane keep assist or a head-up display, for example.

The drive
Its larger overall size in comparison with other budget drop-tops makes for a sturdier feel overall. Handling is great, maybe not as crisp as the Golf but still plenty good enough to make scooting around town a pleasure. There’s some lag when starting up at light or in stop-n-go traffic, but nothing too dramatic. Acceleration is decent and no more, but in this as in many respects it’s important to keep in mind that this is a car focused more on delivering a fun driving experience than a performance-oriented one. Go down the checklist for rating a car’s on-road performance, and the Beetle doesn’t fare well in comparison with the Golf.

But no matter - with the top down on a sunny day, this 2018 Beetle convertible, though it may not be long for this world, still brings joy to those who use it. And remember, as an affordable drop-top, this Beetle operates in a relatively competition-free zone. Surf’s up!

Pluses
Great retro feel
Surprisingly quiet ride with the top up
Unsurprisingly good time with the top down
Nimble handling
Good interior quality of construction
Top folds back quickly
Reasonable price point
Get it while you can! 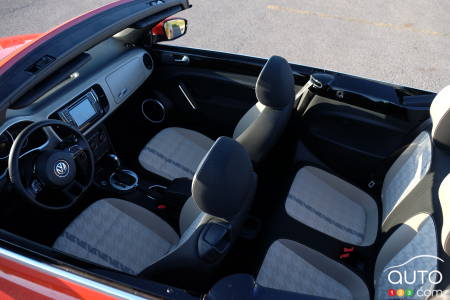 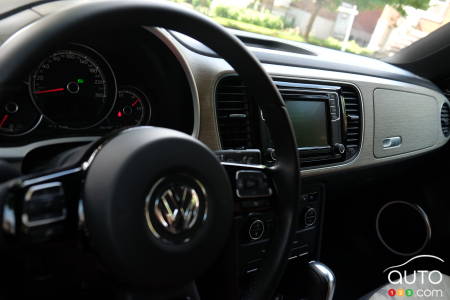 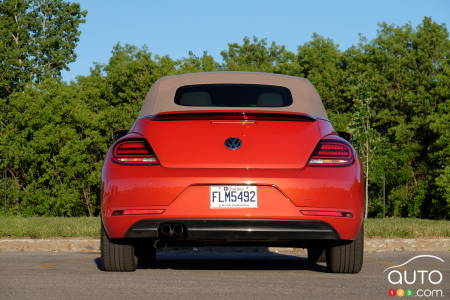 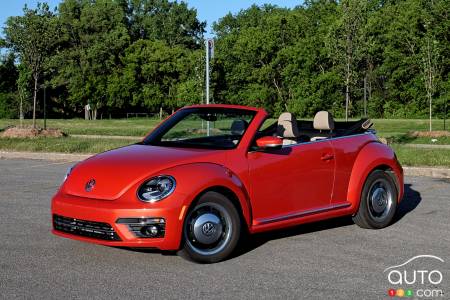 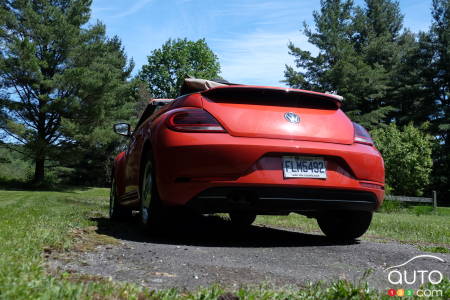 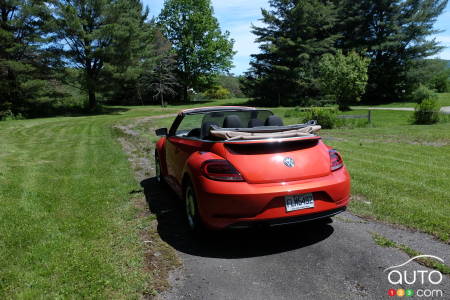 Volkswagen bids farewell to its Beetle with 2019 Final Ed...

Saying farewell: Volkswagen announces a special Final Edition of the 2019 Beetle. The model will be available in coupe and convertible formats. It’s a histor...

The Volkswagen Beetle Could Re-Emerge, as an Electric

The Volkswagen Beetle, whose origins date back to the era of the Nazi regime, is nearing the end of its production cycle and the company has already announce...

A Bug’s Life: End of the Line for the Beetle

Volkswagen has confirmed that it will discontinue the Beetle at the end of the current generation’s run, which could come as soon as this year. Re-launched i...