The recent spate of tornadoes that hit part of the United States caused destruction of homes and businesses and, tragically, some fatalities in several states, but nowhere more than Kentucky. Which is the state that General Motors’ Bowling Green Assembly plant calls home.

It was reported last week that the plant suffered some damage as well, and it has now been confirmed that at least 122 C8 Corvette models were so seriously damaged that they’ve been declared unsalvageable and will be scrapped.

The figure may grow, as GM says the process of inspecting vehicles has not yet been completed. Particularly, inspectors have to look at Corvettes that were completed and parked outside the facility awaiting shipping out.

GM plans to reach out to dealers who have orders in for the models that have been destroyed so they can resubmit orders. The plan is to prioritize those orders when production resumes. That is scheduled to happen this week.

At the moment, most of the 1,200 workers have yet to return to the plant, but a skeleton crew of around 90 workers has remained on the job since the tornadoes hit. The main workforce is expected to return to work Thursday, Dec. 23, though that will be quickly be followed by a break for Christmas.

Speaking of Christmas - and the spirit of giving that ideally comes with it – the union says it has received so many gift cards to help its workers in the wake of the natural disaster that it plans to use some of them to help out residents of the community of Bowling Green affected by the tornado or simply in need. 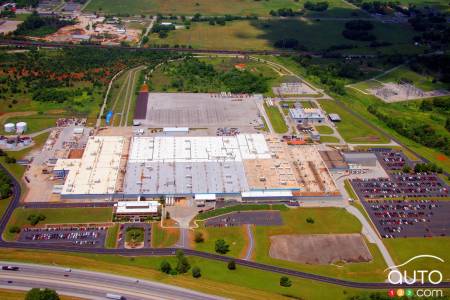 The tornadoes that hit the Midwest this week damaged the GM plant in Kentucky that makes the Chevrolet Corvette. The damage at the plant is not severe, but i...