All divers live with the hope that one day they’ll make an incredible find underwater, whether it’s worth money or not. Ken Merryman, who has been diving for 50 years has just made one of those incredible finds at the bottom of Lake Huron. He and his team found the shipwreck they had been looking, the Manasoo.

The ferry, which first took to the water in 1888, was in service on the Great Lakes for 39 years. In 1928 it was acquired by the Owen Sound Transportation Company and it was put to use doing the run between Sault Ste. Marie and Manitoulin Island on Lake Huron. That year, during the night of 14-15 September, it succumbed to strong winds and rough waters and went down.

The team of wreck hunters led by Ken Merryman set out to find the ship last summer, and it did in August. To the great surprise of the divers, they came face to face with a 1927 Chevrolet on board. The car is intact though covered in sediments and mollusks. 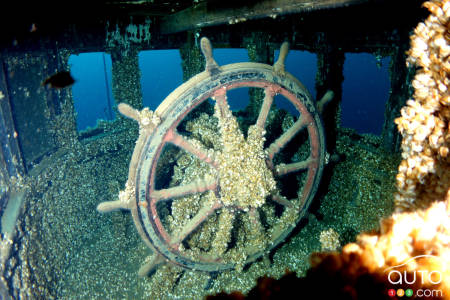 Ken Merryman, who has long been interested in boats from the early 20th century, said that it’s very unusual to find vehicles on board wrecks from that period in history, mostly because cars were still a relative rarity in those days. Which of course makes this find even more incredible.

The big question then became whether the car should be brought up to the surface and placed in a museum, but this possibility was quickly discarded. For one thing, the cost of the operation would be prohibitive, and for another there would be a high risk of causing damage to both the wreck and to the car itself; 90 years under water can do a lot to weaken a vehicle’s structural strength.

Fun fact: In 1927, Chevrolet produced just over one million vehicles, surpassing Ford for the first time since 1906. Part of that was because the 1927 Model T was on its last year of production. Chevrolet continued to lead in 1928, but was overtaken by Ford for the next years before retaking the crown and holding it for three straight years after that.

The AJAC (Automobile Journalists Association of Canada) has named the category finalists for its 2021 Canadian Car of the Year and Utility of the Year awards...

Chevrolet Equinox Updates Will Wait Until 2022

The Chevrolet Equinox was scheduled to receive updates for 2021, but now the automaker has announced those will have wait until 2022 – due, unsurprisingly, t...