News
True colours revealed on a road trip
First impressions are important, but sometimes you really need to get to know someone to discover their true nature. This doesn’t just apply to people, but vehicles too, and was all too much the case for my time behind the wheel of the 2013 Acura MDX.

At just a smidgeon over $60k (for my Elite model), the 2013 Acura MDX sits in high class, futuristic company, and I thought it was sitting pretty and was a viable choice from the aristocratic group in which it resides.

What is the Acura MDX?
The Acura MDX is a three-row, seven-seater crossover SUV, and was the first of its kind when it arrived in 2000. With plenty of space and a decent engine available from the beginning (a 3.5L when it arrived, and now a 3.7L), the MDX answered a need for space, a bit of power and efficiency. Wrapped in a stylish Acura-designed package, it was well received.

Always a “luxury” vehicle, the Acura MDX has continued the trend well over a decade into its North American stay. The 2013 model is no slouch when it comes to amenities, loaded to the gills with everything you need to make life behind the wheel (and as a passenger) easier.

Technicalities
The 2013 Acura MDX is equipped with a 3.7L 24-valve VTEC V6 that pushes out 300 hp and 270 lb-ft of torque. Tipping the scales at 2,109 kg (for my Elite model, the chunkiest of the bunch), this is no lightweight. A 6-speed automatic transmission manages the power and performs quite well on its own, but can also be controlled via paddle shifters. The 2013 Acura MDX also features Acura’s Super Handling All-Wheel Drive system (SH-AWD) and has a towing capacity of 5,000 lbs.

As the Acura MDX was designed and introduced to be a convenient family vehicle (with luxury amenities) cargo volume and space are of the utmost importance. With all back seats folded down, the 2013 Acura MDX offers up 2,364 litres of space to swallow up goods. With all rows up, that number shrinks to just 425 litres behind the third row (less than the Kia Soul that offers 546 litres with all seats up).

Driving the Acura MDX
Behind the wheel of the 2013 Acura MDX is a pretty good place to be. Throttle response is good, as is engine delivery of the 300 horses under the hood. I also enjoyed the ability to shift via the steering-wheel mounted paddles. Honda/Acura have a knack for making vehicles that are good fun to drive, and such is the case with the MDX -- despite a few niggles.

On a trip to the country with a fully loaded MDX (which I’ll get to in a moment as well), we noticed that road noise is abysmal. For a luxury vehicle, the 2013 Acura MDX doesn’t “sound” luxurious as we actually had to raise our voices to speak to one another. All passengers also noted that the MacPherson strut front independent suspension and multi-link independent rear suspension may need some serious updating as it was a less than comfortable ride.

Even though the 2013 Acura MDX Elite offers up the ability to change the “ride” from Comfort to Sport, it just stiffens things up from float-y, sea-sickening (read: Comfort) to jarring and uncomfortable (read: Sport). Not the ideal road-trip vehicle after all.

Inside and Out of the Acura MDX
Sitting at the top of the pack, my 2013 Acura MDX Elite was decked out with everything and then some (DVD entertainment for the back, XM satellite radio, blind-spot monitors, rear-view camera, the whole shebang). I quite like the look inside: it’s sophisticated and upscale without being too snooty. I want to offer up a “bravo” to Acura for the multitude of buttons it threw into the MDX in our currently button-less automotive world. While everyone else goes for touch-this and link-that, Acura’s remained old school, and for that I’m thankful.

However, button placement on the steering wheel is a bit annoying as some sit much too low.

Seating in the 2013 Acura MDX is mainly good. Front passengers have plenty of space and comfort. Second-row occupants will feel the same with plenty of legroom. But it all kind of goes downhill when you hit the third row. At 5’2” essentially I should fit anywhere. Yet, I had virtually no legroom in the third row and had to sit with knees to the side -- and the second row cannot be slid forward for more room in the back.

The exterior look of the 2013 Acura MDX is, perhaps, its best quality. Sitting atop 19” wheels with modern Acura touches we’ve come to recognize over the years, this is a sharp-looking crossover SUV.

Comparing the Acura MDX
The 2013 Acura MDX Elite sits amongst some pretty heavy hitters like the BMW X5, Audi Q7 and even the Mazda CX-9. While a good-looking package inside and out, the MDX just isn’t “fresh” enough to warrant the price tag attached, in my opinion.
2013 Acura MDX ELITE 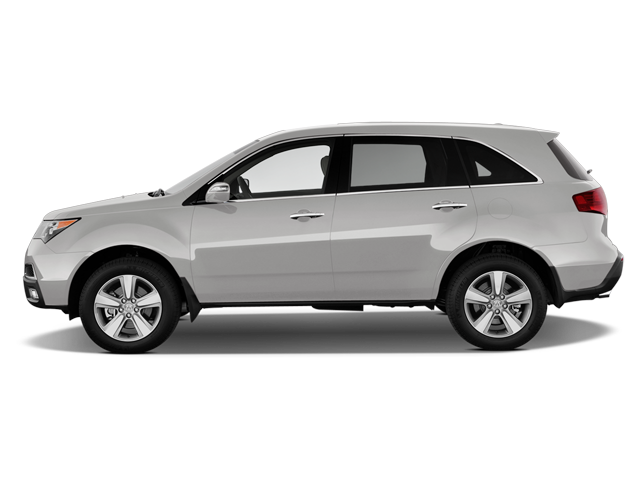 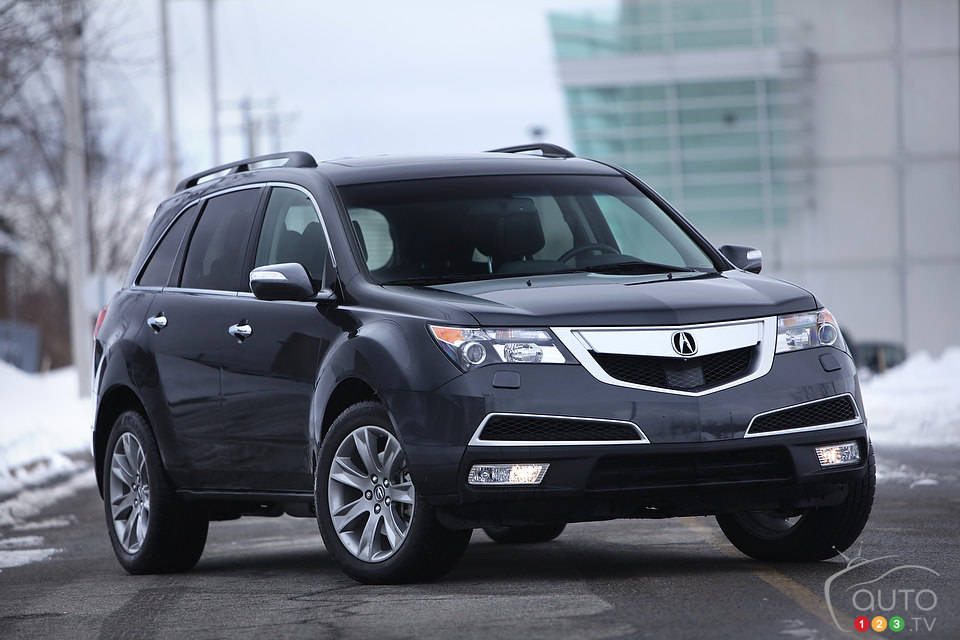 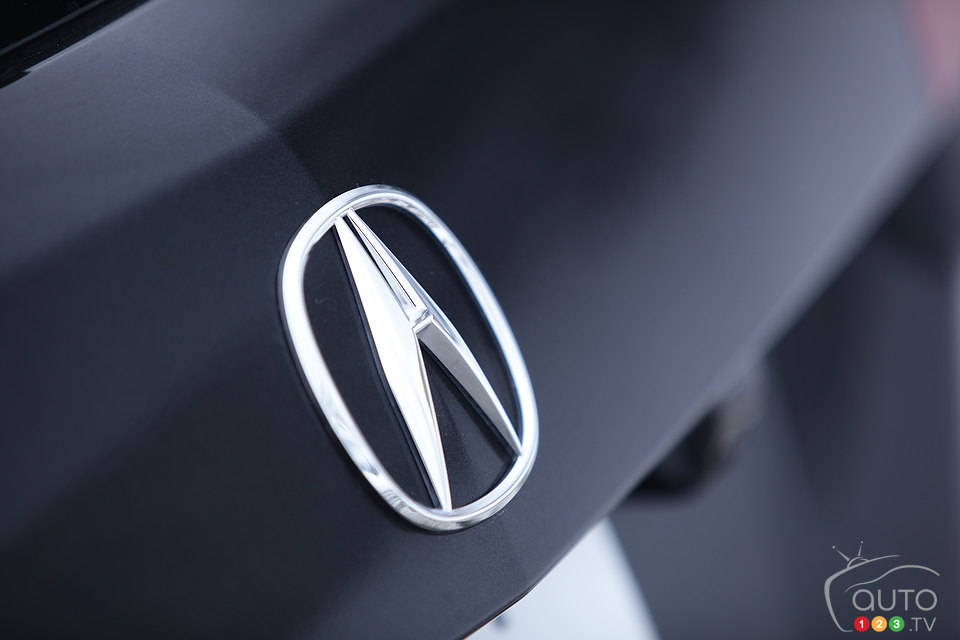 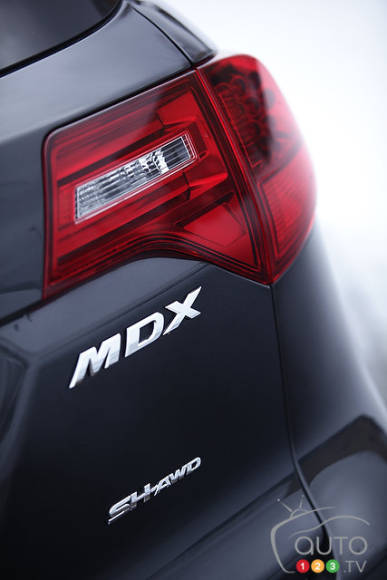 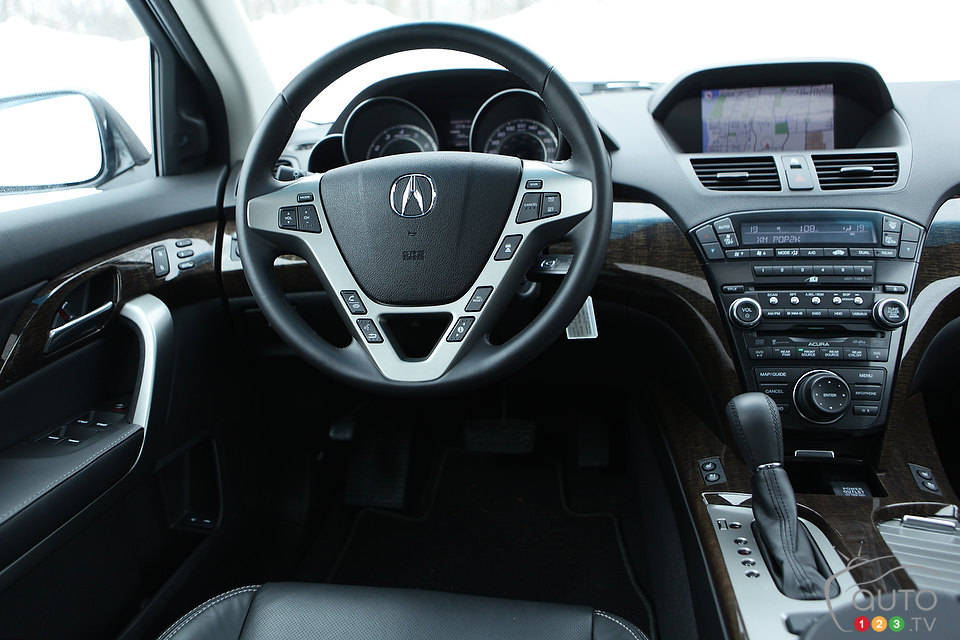