Still top dog
The Mercedes S-Class will soon enter its latest iteration for the 2014 model year -- and as it has for generations, the latest top-dog Benz introduces a mouth-whetting selection of new technologies, engineering efforts, and design touches that work towards German luxury sedan supremacy. Most notable for the latest model is a striking new cabin atmosphere, and a slew of autonomous driving functionalities that’ll soon put test drivers like yours truly out of a job.

What is a Mercedes-Benz S-Class?
For generations, the S-Class has been Mercedes’ affluence-targeting, top-line posh-rocket. Held by many as the benchmark in its class, it’s a machine perpetually loaded with the automotive industry’s latest and greatest -- all employed towards a memorable, high-luxury motoring experience. The stately Mercedes-Benz S-Class has just entered its latest generation, and proudly advances on all fronts as it hits dealers for 2014. Fans of high-end gadgets and interior design can safely start getting excited.

2014 Mercedes-Benz S-Class Price and Specs
On a global level, the new 2014 MB S-Class will be available with numerous options for diesel, gasoline, and hybrid power. Rear- or all-wheel drive variants are available, depending on shopper tastes, as are standard- and extended-wheelbase models. At launch in Canada, the 2014 Mercedes-Benz S-Class will be available in just S550 variant with standard or extended wheelbase, and standard 4Matic AWD. Other markets will get a diesel-powered hybrid -- a plug-in hybrid variant is planned as well.

On a day-long, pre-launch test drive of the new Mercedes-Benz S-Class, your writer noted onf the smoothest performance he’d ever experienced, alongside nearly starting low-end torque output from the twin-turbo V8 engine. Most shoppers should find the refined but very potent power output to be more than sufficient. Output is rated at 449 horsepower with mileage kept in check via features like Auto Stop, Direct Injection, and extensive use of lightweight construction materials.

The 2014 Mercedes-Benz S-Class goes on sale this fall.

Driving the 2014 Mercedes-Benz S-Class
Complaints during an initial test drive of the latest S-Class were minimal and limited mainly to a learning curve associated with the various high-tech features and their interaction with one another. Test drivers investigating the new 2014 Mercedes-Benz S-Class at dealers are advised to allocate perhaps 30 or 40 minutes to learning and experimenting with all features and systems. Further, despite the effortless thrust of the tester’s powerplant, some performance buffs will wish for more steering feedback and engine sound to reach them when driving the S-Class hard. The performance-tuned AMG model should suffice when it hits dealers after the initial S-Class launch.

Inside and Out of the 2014 Mercedes-Benz S-Class
I now have an answer for all the times I’ve ever visited a striking new luxury car cabin and wondered, “What’s next?” in the world of posh car interiors.

Taking a bold forward step from the highly formal look of the last-generation S-Class, the new model’s cabin serves as a rolling collection of design touches gleaned from the world of high-end interior design, architecture, fashion, and high-tech.

The ultra-lush cockpit is rich in detail, thick with wow-factor and revolutionary throughout. High-definition, fully animated displays, web access, and audio-system tweeters that spin and rise to action when switched on are just a few examples. The steering wheel, additionally, features a two-spoke design for an open look, and the instrument cluster and navigation/infotainment systems are assigned to a pair of widescreen displays that “float” within the dash.

Drivers can even set the ambient “smell” of the S-Class with four “mood scents,” as well as ambient mood lighting. Leather trim and metallic speaker elements used in the Burmester “High End” stereo system are all gorgeously detailed, too. You may feel like you’re sitting in a 449-horsepower Gucci handbag.

Other must-try features include a reclining, ottoman-equipped rear massage seat, with a simulated “hot stone” massage available throughout the cabin (while driving, too). Should drivers become drowsy or distracted during their massage, an array of safety-net features can warn them of an intended lane departure, imminent collision risk or vehicle hiding in their blind spot, possibly activating self-steering or self-braking implements to correct the situation.

Ultimately, from driver or passenger seats, the atmosphere is one of relaxation and upscale luxury.

Comparing the 2014 Mercedes-Benz S-Class
Considering a luxury flagship? Test drivers may find the Lexus LS 600h L quieter and smoother in the powertrain department, the BMW 650i Gran Coupe more athletic, and the Audi A8 more visually stunning as it rolls down the road.

Ultimately, the new 2014 Mercedes-Benz S-Class will set itself apart by way of its high-tech safety features, extremely refined and potent performance, and lush, one-of-a-kind cabin. After a day at the wheel, your correspondent found this to be the model’s most dazzling asset. It represents, arguably, the largest single-generation evolution of S-Class interior design in the model’s decades-long history. 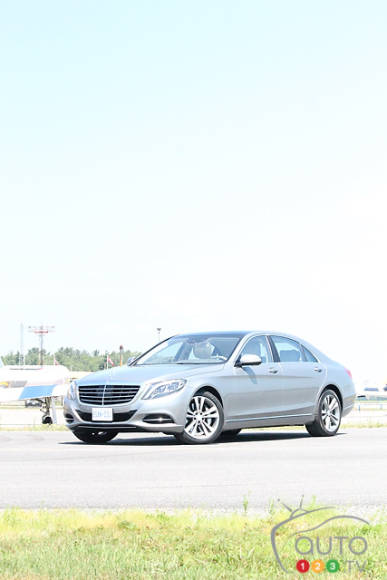 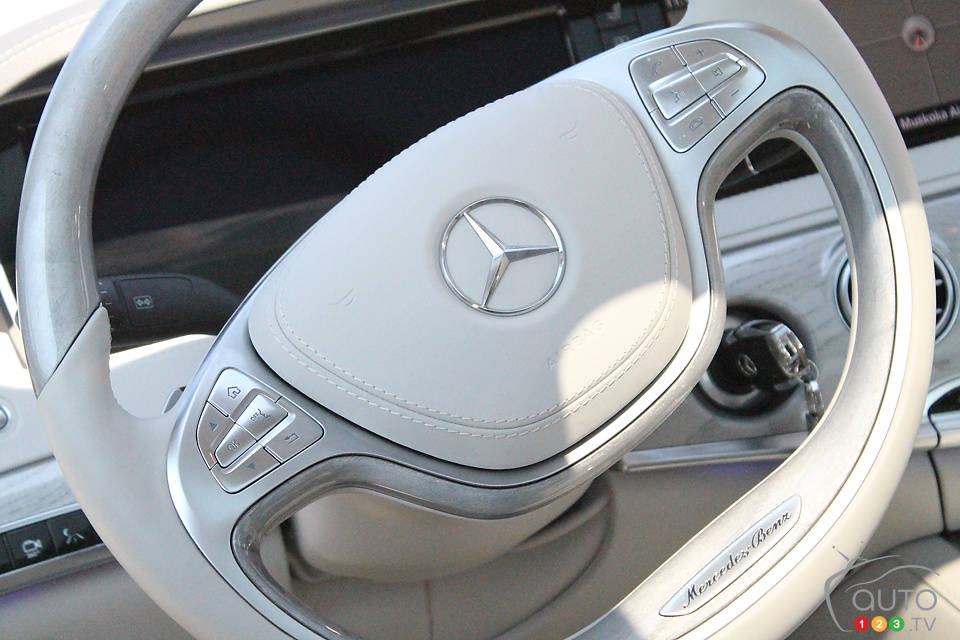 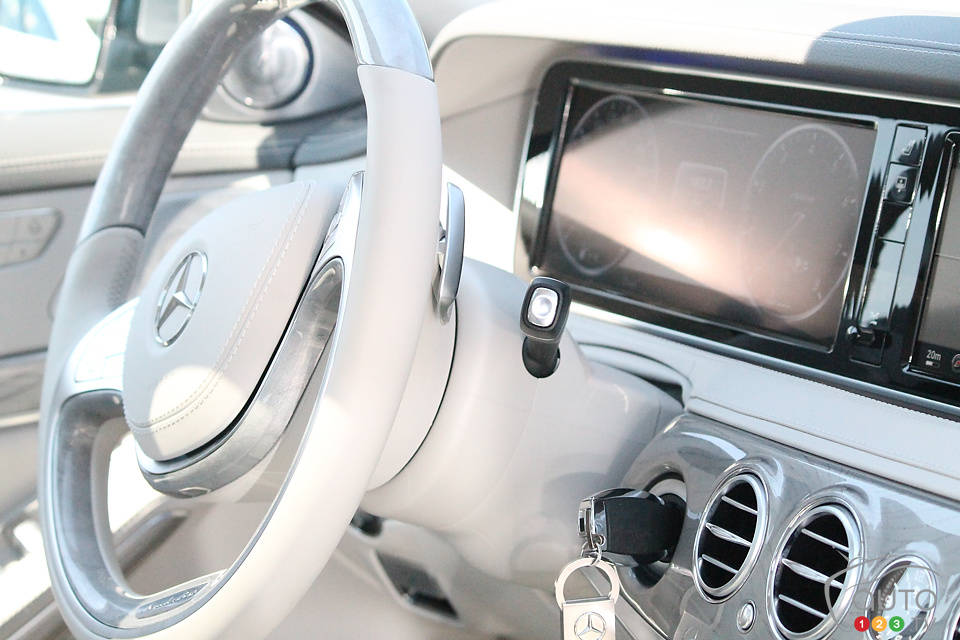 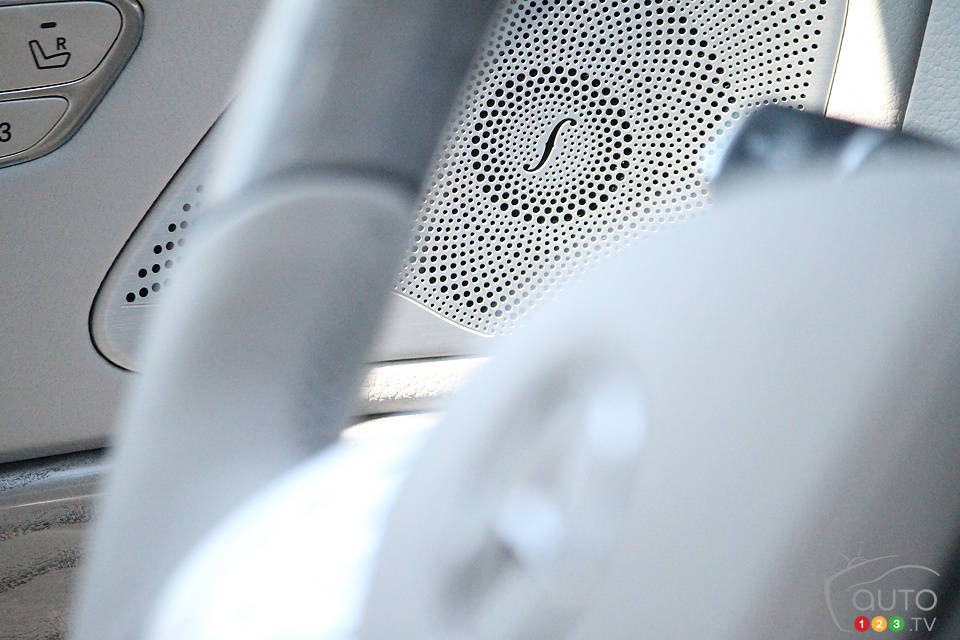 An S-Class Mercedes, like an Audi A8 or a BMW 7 Series, is a state of mind and a financial statement. It's also a testament to where the owner's mind and sou...

Mercedes-Benz will introduce a new generation of its large S-Class next spring, but has just presented it virtually. Auto123 gives you 10 things about it tha...

Images of what appears to be the next generation of the Mercedes-Benz S-Class have appeared on Instagram. The new version is expected to be released in 2021,...