One of the opening events of the 2017 New York International Auto Show saw Acura present the world premiere of the refreshed, upgraded 2018 Acura TLX, which vividly reflects the company’s new approach to Precision-Crafted Performance.

Decked out in a more aggressive, sportier and attractive robe, the new TLX is inspired by the Acura Precision concept, which was first unveiled last year and has served as muse for the 2017 MDX luxury SUV. 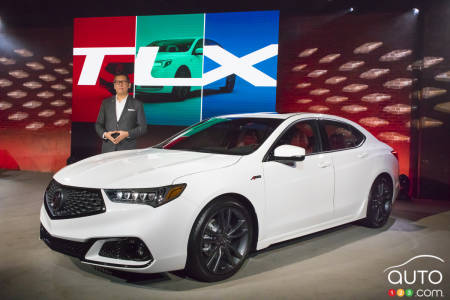 The SH-AWD Tech and Elite packages both include 18-inch alloy wheels; the Elite also comes with an exterior chromed side sill, and its interior features contrast stitching details and new seat piping, as well as a driver’s power thigh-support extension.

New TLX A-Spec
The all-new A-Spec package available with both the 4-cylinder and SH-AWD versions of the 2018 Acura TLX boosts the design to another level, and will surely please drivers looking for a modern-looking and sport-minded sedan. It will be fronted by an exclusive new fascia, round LED fog lights, aggressive damper settings and a rear diffuser accented by large, round dual-exhaust finishers, as well as a glossy black rear spoiler.

Inside, buyers can choose from two available colour schemes exclusive to the A-Spec: red or black leather with Alcantara seat and door inserts.

Tech improvements
A number of technological improvements have also been brought to the new TLX, notably with the addition of Apple CarPlay, Android Auto and AcuraWatch compatibility, standard in all versions. The 2018 TLX is also the first Acura to feature the dual-interface “On Demand Multi-Use Display” system. New software improves the system’s response time and features menus and command structures that are more intuitive – allowing for usage that is more fluid and 30% faster, in Acura’s estimation.

The 2018 Acura TLX is expected at Canadian dealerships in June of this year; prices are yet to be confirmed.

The 2017 New York International Auto Show will be the setting for the world debut of the next-generation TLX, inspired by the Acura Precision concept and mor...

Having unveiled its flagship sedan at the beginning of the year, Lexus puts an exclamation mark on the revamped iconic model with the addition of an F SPORT ...