If you’re at all up on the automotive news over the past few weeks, you know that the Chevrolet Bolt EV and new Bolt EUV SUV are both part of a massive recall due to a potential fire problem.

The cause is related to defective batteries supplied by LG Chem. GM and LG Chem continue to work on finding a solution to the issue, and in the meantime production of the models is on hold. GM does not intend to restart production until the problem is resolved.

Unfortunately, that doesn’t remove the risk with vehicle already out there. Model owners have been warned to be extra careful regarding the fire risk. The owner of a 2019 edition learned this the hard way this week when his vehicle caught fire in the garage adjacent to his home. Clearly, either intentionally or through ignorance, Chevrolet's recommendation to park the Bolt outside and away from structures was not followed. 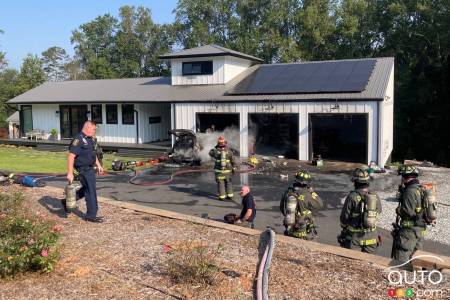 As reported by the Inside EVs website, Cherokee County Fire and Emergency Services in Georgia received a call early Monday to respond to a fire. The homeowner explained to firefighters that his smoke detectors started going off and he traced the source to the 2019 Bolt parked in the garage. Firefighters smothered the fire and pulled the car out, avoiding the worst. A Dodge Ram pickup truck parked next to it sustained some smoke damage. The Bolt, however, is a total loss.

This incident is a useful reminder that the advice authorities give only works if it is followed. If this Bolt EV had been parked on the street, away from structures, the property would not have suffered any damage. 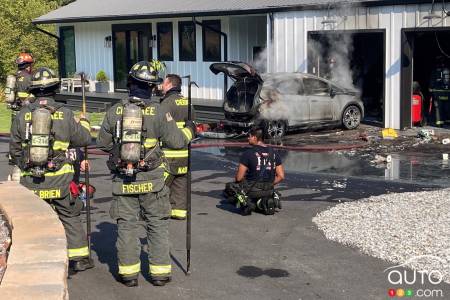 Hopefully this latest incident will serve as a reminder to current Chevy Bolt EV owners to park their vehicles in a safe location. This is a rare problem, but it happens and it’s only other someone else’s problem until it happens to you.

We will continue to monitor the situation closely and let you know, of course, when GM and LG have figured out how to fix the problem. If there's any good news from events so far, it's that there have been no fatalities from Bolt fires.