The Infiniti Engineering Academy (IAE) is a program that was started by the Japanese automaker back in 2014 in the United States and the United Kingdom. It arrived two years later in Canada, and since then it has spread to seven regions of the world.

Each year, the Renault F1 group recruits seven engineering students from around the world. For the 2019 edition, the Academy received 10,000 student registrations, 250 of them from Canada, a 46% increase over 2018. Of the 250,000, seven students were chosen for an engineering internship, the first six months with the Renault F1 team in Europe and the other six months at the Renault car company in France.

At the end of their internship, depending on their performance, the student may get offered a position (the student retention rate since the beginning of the program is 50%). Canada's 2017 IAE winner, Matthew Crossan, now has regular employment with the Renault F1 team, while 2018 winner Chase Pelleter began his internship at Renault F1 in January 2019. He will then head for the Renault group and intern there until January 2020.

Selection process
The Canadian 2019 finals of the academy, the first of seven finals held around the world this year, took place this past June 5 and 6 in Montreal during Grand Prix weekend. The 10 Canadian finalists participated in a variety of challenges including the construction of a small-scale car prototype, motivational interviews, a media session with journalists and decision-making tests. The tests served to evaluate the potential of each finalist in teamwork situations, under pressure with the media and in the application of their engineering knowledge. 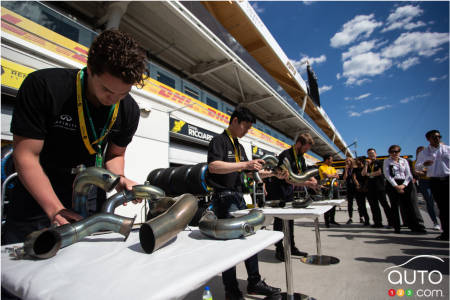 From ten to three
Following the various individual and group tasks, judges including Renault F1 leaders and engineers from the Renault-Nissan Alliance whittled the finalists from 10 to a final trio. The three finalists, Derrick Tan from the University of Waterloo, Luke Gregoris from London University and Matthew Kemp from the University of Calgary, participated in the final challenges at Circuit Gilles Villeneuve on Thursday, June 6th. They had to respond to a barrage of questions from journalists invited for the occasion and finally set up an F1 exhaust system.

After coming out on top, Matthew Kemp became the first of seven academy engineers globally to be offered an exceptional one-year internship in the automotive field of Formula 1. Chosen by the jury made up of representatives of Infiniti, Renault F1, the Renault-Nissan-Mitsubishi Alliance and Harvard University, Matthew Kemp will begin his dream year with the manufacturer and the F1 team in January 2020.

About his hard-won victory, the 20-year-old student said, "It's incredible. I learned so much about myself and what it takes to work in motorsport. To go through all the challenges and come out on top is extraordinary. Being the youngest participant, I felt like an outsider, but it was an honour to compete alongside the other nine finalists. I am very grateful for this opportunity offered by INFINITI and Renault F1 and I look forward to starting my internship in the UK."

Rendez-vous again next year for a new edition of the Infiniti Engineering Academy.

It appears that a merger between FCA and Renault remains a possibility. Executives from the companies have been meeting to try to find grounds for an agreeme...