When the second generation of the Nissan LEAF debuted last year, the general positive reviews came with one common caveat: its relatively short 241-km range.

In fact, that is not really that bad a figure; it’s actually better than what competitors like the Hyundai IONIQ and Volkswagen e-Golf have to offer, for example. But since Nissan has positioned itself as a pioneer by commercializing a more affordable electric car, and given that it has undeniable expertise in the domain, consumers reasonably expected more, much more in fact.

Meanwhile, vehicles like the Chevrolet Bolt and the Tesla Model 3 were being introduced with similar price points and promising nearly double the range.

Nissan’s stance throughout all this has been to ask for time. Now, it appears that time has come, or will in 2019. 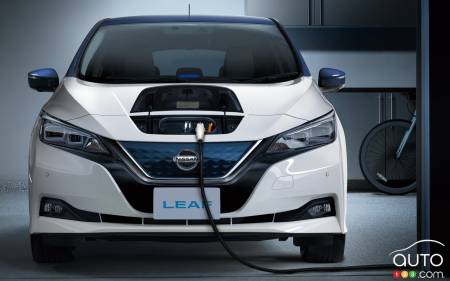 A lot of vague, still

We don’t know everything, though. During a promotional event tied to the Formula E circuit, Nissan’s director of EV marketing Brian Maragno provided a few details about the 2019 LEAF.

He explained for example that the model would get a larger battery that will help bring total output up to 200 hp (from the current 142 hp), and that the extended-range LEAF would get E-Plus badging. The fact that the manufacturer is taking the trouble to differentiate this edition presumably means that the variant with the 40 kWh capacity will continues to be offered.

Nissan is not saying just what the range of the E-Plus variant will be, unfortunately, though it is not denying that it should exceed 200 km, and approach 330 km.

For sure that is a welcome improvement, but it does leave the door open for the LEAF being bested by ambitious competing models next year. We’ll see…

We’ll of course be sharing you with additional information as soon as it becomes available.