Last week, Audi announced that it will not be present at the next North American International Auto Show, taking place in Detroit in January 2019. This week it’s Volkswagen’s turn to take a pass on a major event on the car show calendar. There will be no VW banner at this year’s Paris auto show.

And that, is a bit like Chevrolet giving the cold shoulder to the Detroit show.

The German manufacturer’s announcement is part of growing trend, in fact. A number of companies have in recent months declared that they will be skipping this or that auto show. The Paris show alone will have to do without Nissan, INFINITI, Ford… and now Volkswagen.

The next North American International Auto Show, taking place in Detroit next January, will not feature the big three German luxury automakers (Mercedes-Benz, Audi and BMW). Volkswagen’s own presence at the 2018 edition of the Detroit show was a reduced one.

No one reason explains the series of withdrawals announced by automakers. In Volkswagen’s case, the diesel-engine emissions scandal has necessitated cost-cutting measures. But that’s not the only explanation. For several years now, there has been a gradual decrease in attendance at traditional automotive salons. Increasingly, companies are preferring to focus on new events focused on connectivity and autonomous driving - think the Consumer Electronics Show in Las Vegas, or the Mobile World Congress held in Barcelona, Spain. 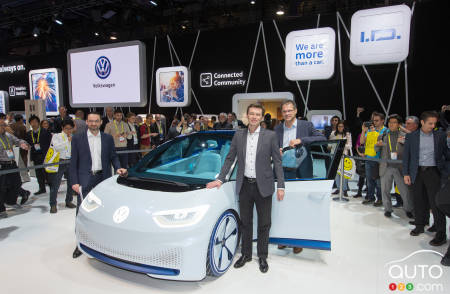 Volkswagen stated that it is continually re-evaluating its presence at individual events. It may well return to Paris at the biennial event’s next show in 2020, for example. The Paris show, by the way, alternates with the Frankfurt event; the latter event takes place in odd-numbered years.

A French representative of the company also pointed out that the VW Group’s Audi, Porsche, Skoda (Czech Repulibc)) and Seat (Spain) banners will be present in Paris this year.

Volkswagen will unveil the e-Co-Motion electric commercial truck concept next week at the Geneva Motor Show.

The Golf is back! (video)

After selling over 26 million units worldwide, including 400,000 in Canada, the Volkswagen Golf is back for a sixth generation. While executives of the Germa...