Things are hopping at Cadillac lately. Last week the XT4 crossover was unveiled with a splash in Seattle – here’s our review - and on that occasion the automaker stated that it planned to introduce a new product every six months for the next two years. We now know that the Detroit auto show will be the setting for Cadillac to present a new three-row SUV.

It seems more than likely that the new model will get the XT6 nameplate.

The new model will fill the vacant space between the XT5 SUV and the monster of the family, the Escalade. It will probably share a platform with the Chevrolet Traverse and the Buick Enclave; that platform, known under the codename C1XX internally at GM, is modular. Already, the GMC Acadia, the XT5 itself and the recently announced new Chevrolet Blazer are all built on a shortened version of that architecture.

With this model Cadillac will be able to go head-to-head with luxury rivals like the Volvo XC90, Audi Q7, Lexus RX L and Lincoln Aviator. 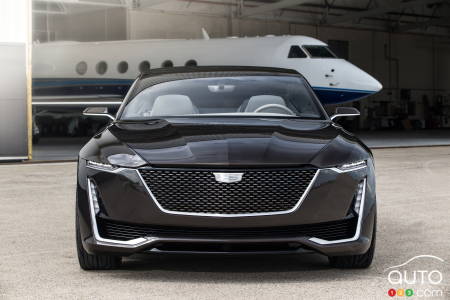 In terms of styling, the signature that animates the small XT4 should be transposed to the new XT6, which will also bear the imprint of the Escala concept.

Under the hood, we can expect the model to come with either of two V6 engines: the 3.6L already in use in the Buick Enclave, and the 3.0L twin-turbo used solely within the Cadillac division.

Cadillac is going to be an active player in the industry in the coming months, and it’s clear that the arrival of Steve Carlisle in replacement of Johan de Nysschen last April is blowing some fresh air through the company.

The Cadillac Escalade could have 3 engine choices for 2020

Sold in its current form since 2015, the Cadillac Escalade will be getting some revisions for the 2020 model-year, including three different new engine opti...

Cadillac is applying the brakes to the development process for a diesel engine, and will focus on electric mobility in the coming years. The brand-new XT4 cr...