The Honda Civic Type R made a great impression when it first hit the market, and it has since established itself as one of the most fun-to-drive sports cars of its kind. Even though it's only available with front-wheel drive, handling is solid under acceleration and it sticks to the road like Velcro.

But the best lies ahead, apparently An upgraded version will be available in 2020, and Honda has just introduced it at the Chicago Auto Show. 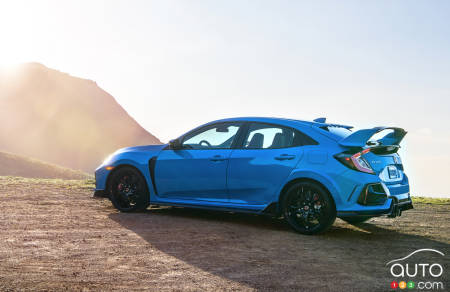 Both the interior and exterior have been slightly revised, but Honda has also made sure to raise the performance level of the Type R. Improvements revolve around the front suspension settings with the goal being to reduce friction and improve steering feel. New shocks for a more comfortable ride and stiffer bushings for improved grip are also included. Honda also promises improved braking at high speeds thanks to new rotors and different brake pads.

The 6-speed manual gearbox benefits from shorter linkages and can be controlled via a new shift lever. A more-massive front grille allows for better engine cooling, though it does not increase the output of the 2.0L 4-cylinder turbocharged engine, which remains at 306 hp and 295 lb-ft of torque.

The only other exterior change is the possibility of going with a blue paint called Boost Blue, exclusive to the Type R, and this is what we in the images. 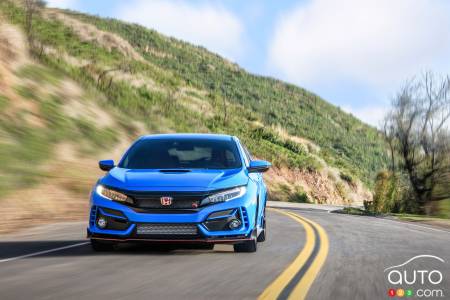 Honda’s promises don’t end there, and so the interior gets more refinement and more safety features. Now part of the offering are a new Alcantara-wrapped steering wheel and an active sound control system that changes the sound inside according to the selected drive mode (Comfort, Sport and +R).

The Honda Sensing Active Safety Suite now comes standard with the entire Civic range. In the other models in the family, it includes forward collision warning with automatic emergency brake, lane departure warning, adaptive cruise control, and lane departure avoidance that brings the car back into the proper lane when needed.

Honda says additional information about the North American Civic Type R will be unveiled as the new model year gets underway later in 2020. We'll see if Canada gets the same modifications; normally, we should. 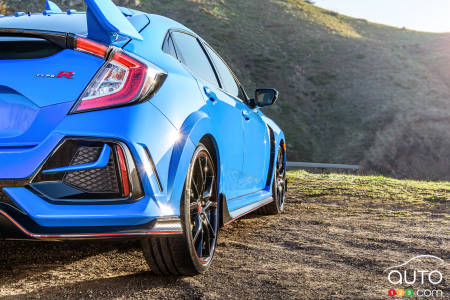 We tested the BMW M2 CS on track, its natural environment. And there, this car put on a wildly successful seduction act! Here’s our review.