Hyundai has detailed the hybrid version of the next eighth-generation Sonata, the signature piece of which is its solar roof. The brand-new system developed by the Korean automaker will allow owners to get an estimated additional 1,300 km of autonomy per year from the panels installed within the roof of this version of the sedan. That figure is based on a calculation of six hours of charging daily.

The new solar roof will “[recharge] the battery to increase travel distance while preventing unnecessary battery discharge,” according to a Hyundai statement.

Let’s be clear, then: this new system will give a slight added boost to the battery, not enough to be noticed on a daily basis but which should improve fuel economy in the long run. 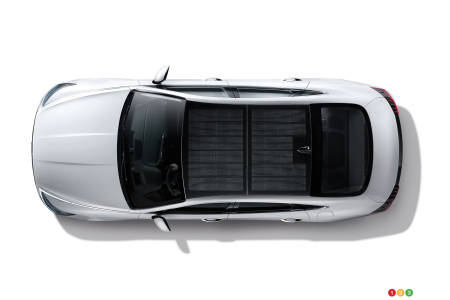 Hyundai is also using the 2020 Sonata Hybrid to introduce a new system called Active Shift Control, which will makes use of newly-developed control logic software integrated into the hybrid system’s control unit. That unit manages the rotational speeds of both the engine and the transmission. What’s more, the reduction in friction during gear shifts compared to a traditional system ensures improved fuel economy, and presumably durability over the long haul.

The new Sonata hybrid will run on a 2.0L 4-cylinder gas engine generating 150 hp and 139 lb-ft of torque, supplemented by an electric motor and working in conjunction with a 6-speed hybrid automatic transmission. Total system output of the powertrain will be 192 hp.

Hyundai is promising the 2020 Hyundai Sonata will deliver thrifty fuel consumption averages of just under 5.0L/100 km – this when riding on the standard 16-inch wheels. Switching those out for the bigger 17-inch wheels will inch up the average to just under 5.25L/100 km. 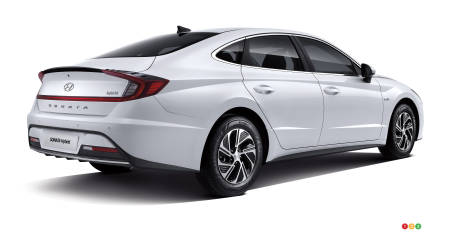 This isn’t the only additional Sonata version Hyundai is working, it appears. A spruced-up N-Line model is said to be in the works, as well as other “dramatically different variants”, according to the company.

The regular 2020 Sonata is set to launch this fall, and it’s expected the hybrid version will debut some time after that. 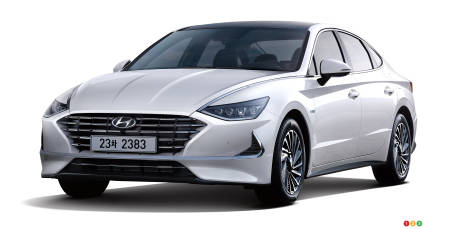