When the FX arrived on the market for the 2003 model-year, it made an immediate and tangible impression. It became a favourite among buyers looking for what was then still just a fledgling new segment, that of luxury SUVs.

The FX’s glory years lasted a few years, but its star started to fade at the turn of the present decade. Most damaging was the influx of new models in the segment. Two years ago, it was quietly dropped from the automaker’s roster. By then, the model now known as the QX70 was being simply ignored by consumers.

But now the FX/QX70 is about to be reborn, of sorts. This past week Infiniti was at Monterey Car Week to reveal a first sketch – and the name – of the model that will replace the defunct SUV in its lineup. The sketch, mind you, amounted to little more than a tease of the vehicle’s silhouette.

That tease does reveal that the future Infiniti QX55, like its progenitor, will be very much a coupe-style SUV. Which means we can expect the same ingredients that made for the FX’s initial success: a seductive shape, huge wheels, and much sacrificing of cargo capacity. 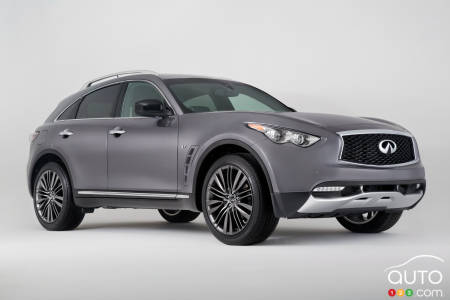 Infiniti says that the model should be arriving at dealerships in the summer of 2020, which leads to imagine a first in-the-flesh appearance at the Los Angeles Auto Show in November, or perhaps the New York show in April 2020 (recall that the Detroit auto show has moved from January to June beginning next year).

"The Infiniti QX55 is a stunning new SUV coupe in the heart of one of the industry's fastest growing segments, globally. Customers will appreciate the distinctive design of the QX55 which features a sporty coupe-like roofline. We know customers and retailers are eagerly looking forward to the QX55 which will be available next year."

It remains to be seen, of course, just how much enthusiasm consumers will display for this new model. We’re also eager to know what kind of powertrain(s) the QX55 will get, keeping in mind that Infiniti has been clear about undertaking a big offensive in the electric mobility domain.