Infiniti is to unveil the new QX55 SUV this coming November.

It hasn’t happened much lately, but we've had some news from Infiniti – and it has nothing to do with the coronavirus. Nissan's luxury brand hasn't offered up anything new for the past two and a half years; rather the company has been busy working behind the scenes to prepare for its future.

And its margin for error is slim. Nissan's financial troubles have been well-publicized in the last couple of years. In terms of its product line, it's seen better days and buyers have been abandoning it for a few years now.

In short, Infiniti has its work cut out for it.

On November 11th, we'll get a first glimpse of what's in store for us from the Japanese automaker, as it lifts the veil on its QX55. The coupe-style SUV actually returns the company to its roots in the domain of SUVs. Recall that Infiniti was very successful with the FX, which was introduced in 2002 for the 2003 model-year.

"With a roofline and visual elements inspired by the iconic Infiniti FX, the QX55's provocative design will fuse the stance and versatility of a premium mid-size crossover with the sleek profile of a sports coupe. Beyond its provocative looks, the QX55 will also feature innovative technologies designed to empower, engage and connect luxury customers to the road ahead."

The announcement was accompanied by an image of the QX55's tailgate.

The QX55 is one of five new vehicles that Infiniti plans to launch over the next three years. It was first announced in August 2019 at the Monterey Auto Week event that includes the Pebble Beach Concours d'Elegance. While Infiniti has relied heavily on the legacy of the original FX (which later became the QX70), the QX55 will actually have little in common with its spiritual ancestor as it will be based on the QX50. 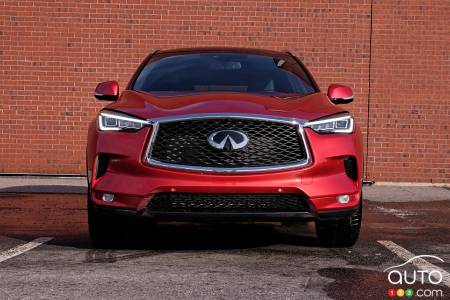 Production of this new vehicle was scheduled to begin in June, but was postponed due to complications at Infiniti's Aguascalientes, Mexico plant. That facility is the result of a joint project with Daimler, Mercedes-Benz's parent company.

Infiniti has announced that production of the new QX55 SUV will be delayed by five months. The factory tasked with building the coupe-like utility model is i...