The rumour of a new Jeep pickup has for some time no longer been a rumour, but confirmed news. Since then the name for this vehicle has been widely assumed to be Scrambler. A logical choice, that, as it pays tribute to the CJ-8 Scrambler version sold during the 1980s.

A new bit of information published on the media site of the FCA (Fiat Chrysler Automobile) Group has thrown watchers a curveball. The tidbit referred to the 2020 Jeep Gladiator, and was first noticed, irony of ironies, by an eagle-eyed member of a forum devoted to the Jeep… Scrambler. The FCA post has seen been removed, but once the cat is out of the bag, good luck getting it back in.

That forum devoted to the future pickup Jeep will change names, obviously, but in the meantime it continues to provide more details, for instance the number of trims and their designations. The new Gladiator, we now know, will be offered in Sport, Overland and Rubicon variants. This doesn’t mean that other versions may be added to the product offering once the models hit the market, in fact we expect that some will.

Initially, the Gladiator will be sold exclusively as a four-door model. 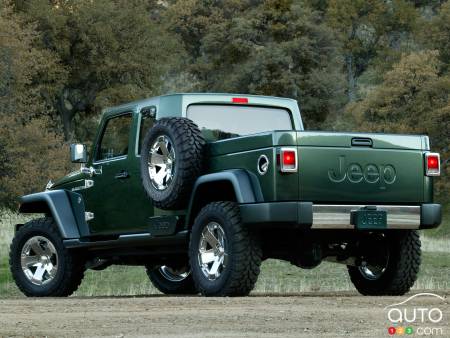 As for the “new” name, those well-familiar with the Jeep’s brand and its past will recall that the Gladiator designation made its first appearance on a variant of the Wagoneer. The name would logically have been more appropriate for a version of the Grand Cherokee, but no matter – the historical reference is what counts.

The Gladiator (let’s assume that this time it is really the name that Jeep has settled on), will make its official public appearance in Los Angeles in just over two weeks. The first models are expected at dealerships early in 2019. As for pricing, it’s difficult to make any predictions, beyond saying that it won’t come with a bargain price.

Stay tuned for full details on this and all the other vehicles launches at the Los Angeles Auto Show as of November 28!

Jeep has toyed with the idea of bringing back a pickup into its lineup for years, and produced a number of concepts. Now, it appears the manufacturer is read...