Back in 2017 Mercedes-AMG presented the GT concept, which foreshadowed the arrival of the Gt model’s four-door variant. At that time, the prototype was advertised as fitted with a powerful V8 engine combined with an electric motor, but since then we’ve heard nothing more regarding this powertrain.

It appears that could change in 2020. The German automaker’s luxury division published a year-end retrospective video and 2 minutes and 17 seconds into it is a shot of a GT 4-door concept accelerating silently away. In its wake, a message declares simply, “The future of performance”.

The prototype appears to be a plug-in hybrid version of the model, which should debut in 2020. Rumour has the model getting the roll-off-the-tongue name of GT 73 EQ Power+ 4 Door Coupe. Where will it end? 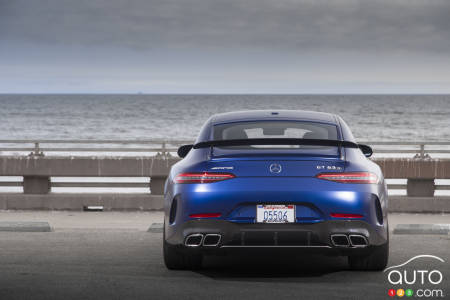 This tease was of course not accompanied by any technical details, but speculation is that the model could get the same hardware as that featured in the 2017 concept model. At that time, the AMG division gave that powertrain’s output as 805 hp. The prototype came with a 4.0L V8 in working in tandem with an electric motor powerful enough to run the car on its own. The current 4-door GT offers a maximum of 630 hp in its GT 63 S configuration.

What’s perhaps most significant about this future model is that the technology developed for it will find its way into other models from the brand.

What’s perhaps most certain about it, meanwhile, is that the company won’t be giving it away. It will be a direct competitor of the Porsche Panamera Turbo S E-Hybrid, to give you an idea.

As for a potential all-electric version, AMG boss Tobias Moers said last September that such a variant is in development. 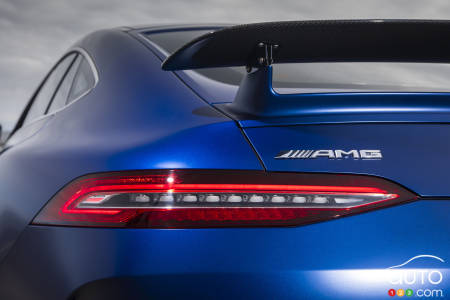