Nissan’s Titan pickup is getting some touch-ups for 2020, chief among them a simplifying of the product offering. Gone is the single-cab configuration as well as the Cummins turbodiesel engine that had been available with the XD variant.

Company spokesperson Wendy Orthman confirmed to media outlet Motor Authority today that Nissan was shelving the Cummins engine and will no longer offer a single-cab version of the Titan in 2020. The current edition of the truck will continue to be produced with these elements until December of this year.

The Cummins turbodiesel engine is currently only available with the XD variant, a cross between the 1500 and 2500 versions of the Titan – imagine if you will a Silverado 2000, with aspects of both the regular 1500 and the heavy-duty 2500. The diesel engine that the XD presently can be had with is a 5.0L V8 with an output of 310 hp and 555 lb-ft of torque, wedded to a 6-speed automatic transmission. That powertrain gives the truck a towing capacity of 12,710 lb, less than the F-150…

The Titan XD will still be available with a 5.6L V8 unit that generates 390 hp.

In line with its reorganization plan announced last week, Nissan wants to eliminate the poorest-selling variants from its roster to better focus on pushing more-popular versions, namely double-cab versions. The company declined to provide sales numbers applying to its single-cab models in the last year, nor any data that would indicate how many buyers actually went for the diesel option.

Even Nissan’s aging Frontier is outselling the poor Titan in the U.S. this year.

The numbers show just how difficult it is for any manufacturer to pierce the armour of the Big Three manufacturers in the North-American full-size pickup market. 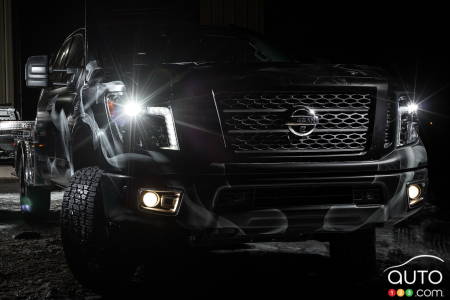 It’s back to Utah we go, as Auto123 test drives the new 2020 Nissan Titan truck. We get to evaluate the changes made for the new edition of the pickup, and m...