The Prime version of the Toyota Prius hasn’t exactly set the industry on fire since it debuted, even with the popular Prius name attached to it. In a landscape dominated by SUVs, cars are finding it increasingly difficult to carve out turf for themselves. Add to that consumers’ growing acceptance of vehicles that run purely on electricity, and that makes the Prius Prime and its 40-km battery range the one left standing in a game of musical chairs.

Its high price tag doesn’t really help its cause, either.

All too aware its Prius Prime has underperformed compared to expectations, is shaking things up and bringing in some major changes for the 2020 edition.

The most substantial of those changes involves a reconfiguration of the second row of seats to make of the Prius Prime a five-person vehicle instead of four. So out go the bucket seats, in comes the bench. The reality is that two-seat configurations in plug-in hybrid vehicles don’t work that well and have been heavily criticized by consumers. The Chevrolet Volt is a (not so) fine example. 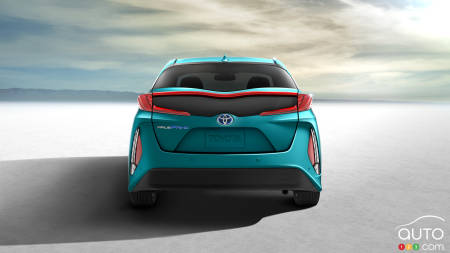 Other changes have mainly to do with tech. The 2020 Prius Prime will compatibility with Amazon Alexa and Apple CarPlay, and Sirius XM satellite radio has been added. It’s actually amazing that last feature wasn’t included up until now, but perhaps that’s just the kind of detail that undermined the model in the marketplace.

That revamped second row also gets two new USB ports. Available as an option is a new black-dominated colour scheme for the interior, as well as extensions for the sun visors.

Will those kinds of tweaks be enough to draw in a substantial number of new buyers? It won’t hurt, anyways. But what would surely help is a Toyota retreat on the pricing front. Making the model more affordable would, in combination with available government incentives, make the Prius Prime a much more-compelling product.

Maybe even compelling enough to make potential buyers look past the car’s styling, which has earned it as many brickbats as bouquets.

The 2020 Toyota Prius Prime is a PHEV that maintains its ugly-duckling appeal even as it gets transformed from a four-seater to a five-seater. Can it survive...