After all these years, the Toyota Prius remains one of the more affordable options for consumers who want to a) spend less at the pump, b) leave a smaller ecological footprint and c) benefit from a reputation for reliability that is still, by and large, unmatched in the industry. This is one resilient model, when you consider that changes happen at lightning-speed in the electric mobility segment these days (just ask the Nissan LEAF).

That said, like any model after a certain number of years, the Prius has started to look its age just a little. For 2020, Toyota decided to dab the Prime version of the model with a little bit of Grecian Formula here and there.

You could actually argue it’s more than just a ‘little bit’. It’s not insignificant, for example, that the second-row seating has been reconfigured so the Prius Prime can accommodate three passengers instead of two. No more leaving your least-loved child at home. 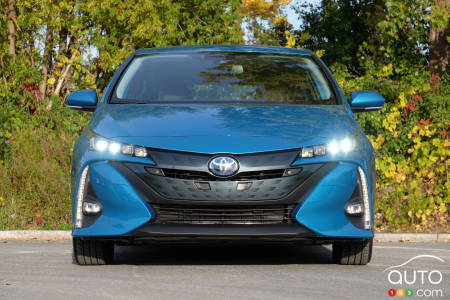 Beyond that, the changes made to the 2020 Prius Prime have mainly to do with the technologies found therein. Apple CarPlay and Amazon Alexa compatibility is now included (though not Android Auto). Sirius XM satellite radio wasn’t there before, amazingly, but it is now. There are also two new USB ports in the second row, over which those three passengers can now fight.

Kitchen appliance
Changes aside, you’re left with the same Prius carapace as before, which for some consumers makes this model a non-starter. But let’s be fair here: odd as the Prius looks, it actually has come some way to normality since it debuted back in 1997 in Japan (it first hit North America in 2001). Besides, barring a total redesign, Toyota has probably long given up on winning over motorists who object to its vaguely kitchen-appliance-ish look. Take it or leave it, is what they say… 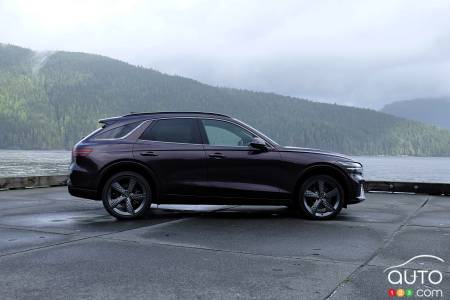 So who does this 2020 Prius Prime want to seduce? OK, seduce is far too strong a term for a model like this. Better to say, who does this 2020 Prius Prime want to convince through its practical arguments? Well, in B.C. and in Quebec at least, it has the government incentives argument to back it up (on top of the federal discount), although the hefty initial price tag of the Prime ($32,990) does blunt the force of that argument just a little.

It also provides, as it has always done, a palatable alternative for motorists who are skittish about going all-electric. For short-distance commuters, the 40-km range from the 8-kWh battery unit of the Prius Prime PHEV means that most of the time they won’t be dipping into the sauce in the fuel tank to get around. My week in the Prius Prime, for example, resulted in total average fuel consumption of… 0.5L/100 km. I probably drove it 400 km over the week, meaning I used about 2 litres of gas. That works out to roughly 9 litres a month, or just over 100 litres in a year. 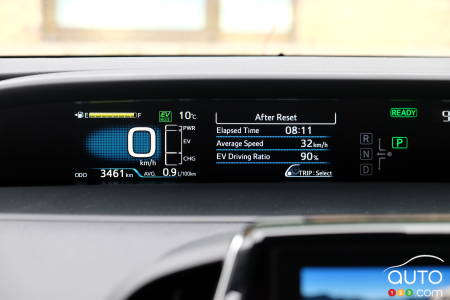 Of course, it helped that I was assiduous about plugging it in every night and spent most of my time at the wheel in the urban jungle – friendly territory for electric-powered vehicles. But still, it gives you an idea of what you can do as a city slicker with a range of 40 km from your electrified ride.

And, no need for the aforementioned skittishness, since if you do longer trips there’s the combustion engine to get you to destination without having to panic about finding a charging station, or sit at one ad eternum while your car’s battery pack recharges. Once you deplete the battery pack, your Prime PHEV becomes a regular hybrid, regenerating a bit of electricity from braking but using the regular gas engine.

Note that the level of regeneration of the braking can be modified, so you can go mild or wild with that depending on how much you want to get jerked forward when you let off the accelerator, at least until you adjust to the system (which doesn’t take long). To adjust the braking to make it more regenerative, simply turn the gear knob to B. 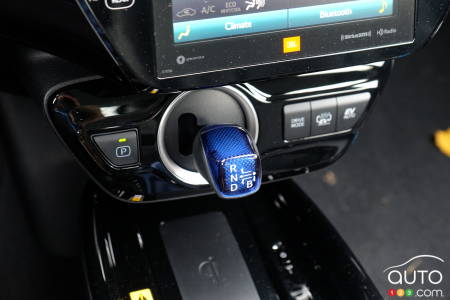 Prime
So what distinguishes the Prime from the non-Prime version, you ask? For one thing, this variant – essentially an upgraded version of the Prius PHEV - allows for longer driving in electric-only mode, instead of sending you back and forth between the portions of the powertrain running on gas and on electricity. If you choose electric model, the Prime stays on it even when you’re accelerating or climbing a hill, for example.

Two fun (and impressive) facts about the Prius Prime: Total range with its dual powertrain is 1,035 km, and it takes under six hours to recharge an empty battery pack on a regular 120V plug at home (or half that time on a Level 2 charger). 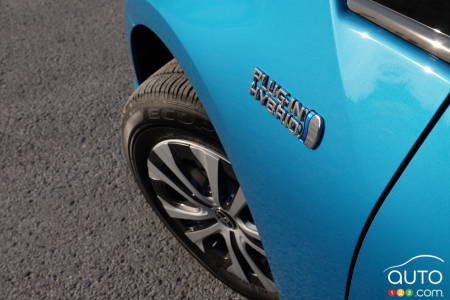 What it gives you
Other than that inevitable smug, satisfied feeling born of doing your bit for the environment while others aren’t, you mean? Well, you get a heated steering wheel, 7-inch display screen, the aforementioned Apple and Amazon apps, a central 4.2-inch digital display cluster (including some neat-o data displays that pertain to the electric components of the powertrain – these have yet to get old with me when I drive EVs!), smart key and push-button start. More significantly, you also get the Toyota Safety Sense P suite of systems.

In the Upgrade version of the Prius Prime, you also get unique Softex seating (softer, I guess), a power-adjustable driver’s seat and a much larger 11.6-inch HD screen with navigation. To that variant, you can add a technology package that includes stuff like a head-up display, auto-dimming rearview mirror, rain-sensing wipers, fog lamps and a premium 10-speaker JBL audio system, as well as added drive-assist functions like intelligent parking assist and blind spot monitor with rear cross traffic alert.

Much of which will probably contribute in some small way to reducing the range you get from your Prius Prime’s battery pack, but whatever. In my case, and maybe because I was spending just a week in the car, I made it a personal matter of honour to turn off all of its electrical systems that I could, for instance the a/c, heating, steering wheel heating, etc., etc., just to squeeze more out of the battery (note: the a/c-heating system definitely had an impact; the others, not so much). 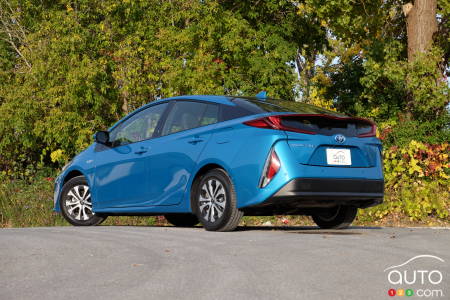 On the road
The 2020 Prius Prime doesn’t provide the dynamic élan off the line that you get from strictly electric-powered vehicles like the Nissan LEAF, Kia Soul EV or Chevy Bolt, mainly because unlike those models it has to lug a conventional engine around. Plus, the Prime weighs a substantial 136 kg or so more than the regular Prius, again because of its configuration.

The 1.8L 4-cylinder engine working in tandem with an electric motor (total output: 121 hp) is enough to get the car around competently, even filled with five occupants, but it is not equipped to deliver much in the form of excitement. The CVT that manages it is serviceable but no more apt to elicit any febrility in you, the driver.

What the Prius Prime is, however, is nimble in its handling, and its acceleration does compare favourably with many conventional-powertrain small SUVs on the market. This is a car smartly designed to be at its best in the environment that it’s built for: the city. For sure, the ugly-duckling factor and the lack of driving excitement will turn off some buyers. There are PHEVs out there that outperform the Prius on those fronts, no question. But here you have one of the best hybrid systems on the planet and Toyota’s well-deserved reputation for reliability underpinning a relatively roomy, practical urban car. The changes brought for 2020 address some faults that hampered the outgoing edition, but it still faces a tough challenge from all those smaller plug-in SUVs hitting the market. 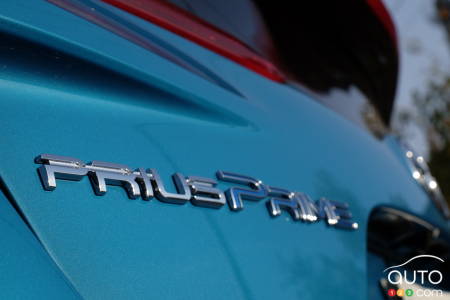 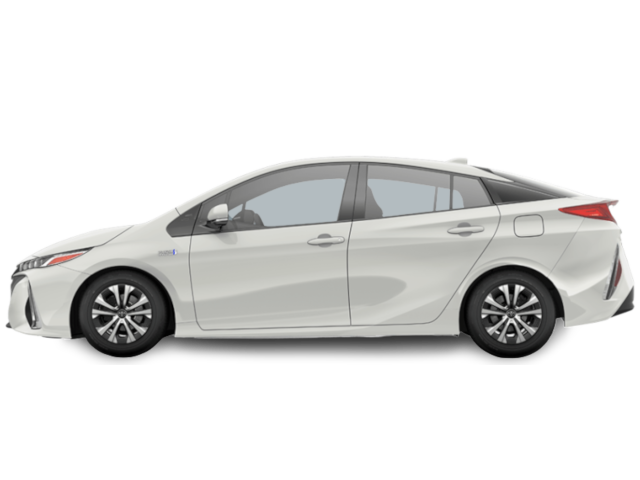 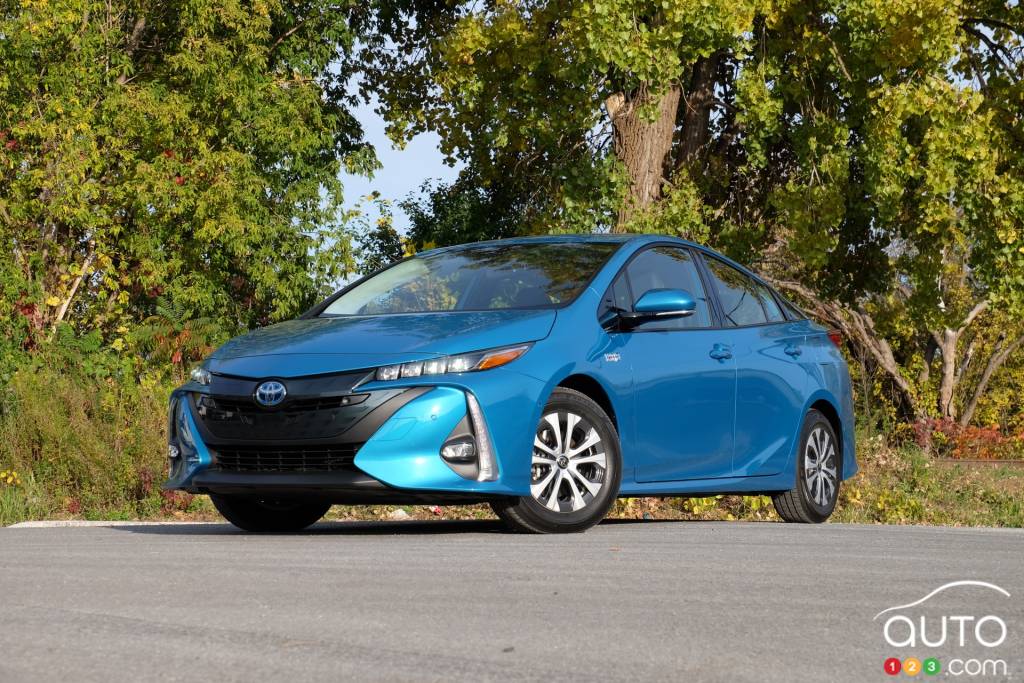 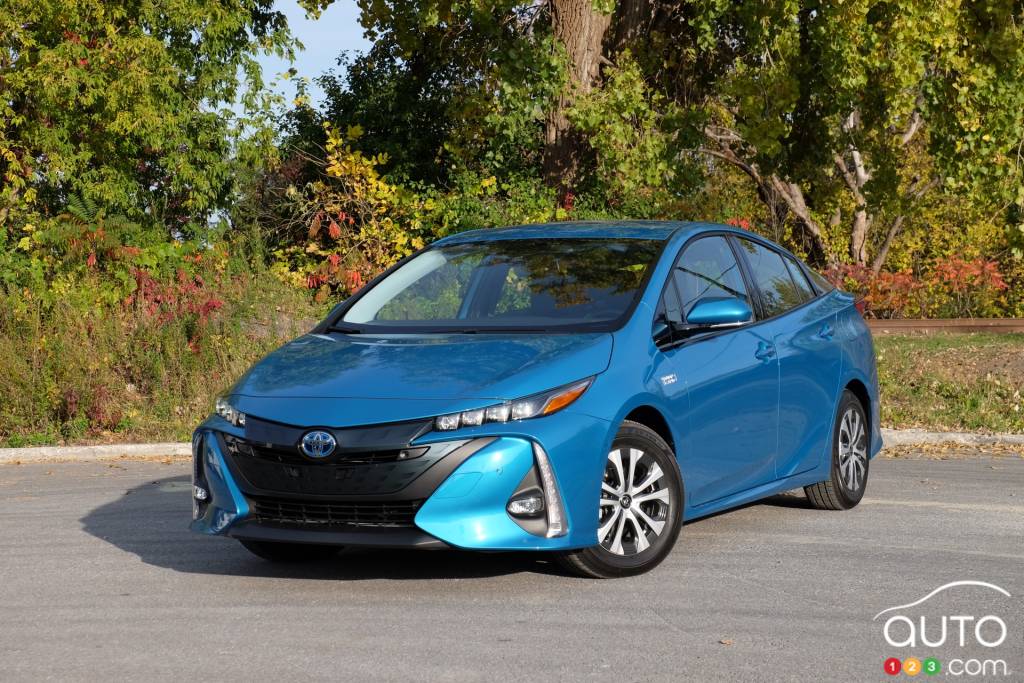 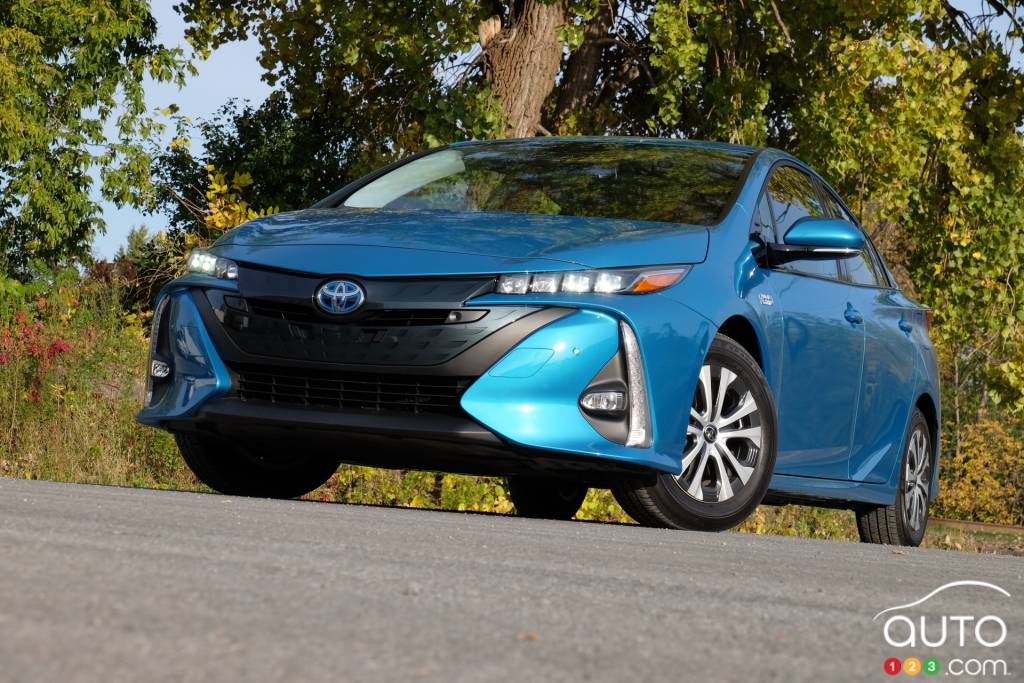 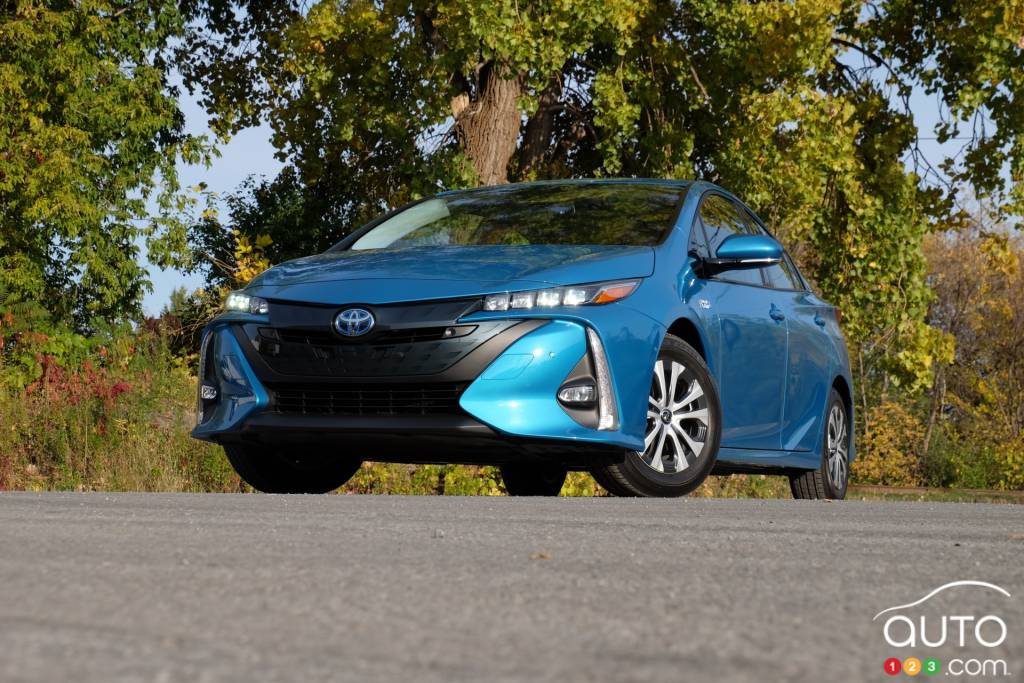 Toyota, all too aware its Prius Prime has underperformed compared to expectations, is bringing in some major changes for the 2020 edition. Chief among them i...