The Jeep Gladiator debuted in Canada for the 2020 model-year, and one of the first things many took note of was its high price point. If you’re wondering why you don’t see too many of them out and about in our country, there’s the explanation right there.

In France, as the model gets set to make its commercial debut, the story is likely to be very similar, though with a twist. What is that?  Its pricing is even more eye-opening there: the base Gladiator pickup comes with a sticker price of… 79,000 Euros.

It could have been even worse. As it’s classified officially as a utility vehicle, the Gladiator sidesteps a 30,000 Euro surcharge it would have been subject to (under what’s known as the Malus Ecologique in France). Otherwise, it would have had a base price of 100,900 Euros. 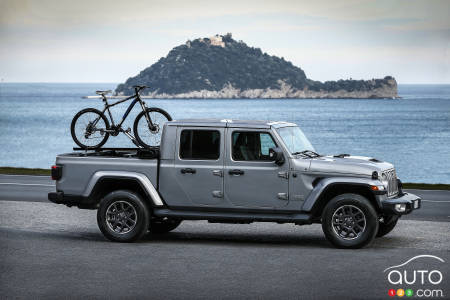 The small silver lining for French motorists is that the version offered to them is well-equipped. The Overland Launch Edition comes with leather upholstery, navigation and a hardtop that matches the body colour.

As a comparison, the Overland edition of the Jeep Gladiator carries an MSRP of just over $53,000 CAD in Canada. Almost exactly half…

Mechanically, our Gallic cousins are entitled to only one engine, the 3.0L V6 Diesel (turbo), which is rated at 264 hp. Its official fuel consumption rating is 9.6L/100 km in Europe.

Can the French public expect to see some on their roads? Certainly, because the price is so high that anyone who wants one probably has the deep pockets not to be scared off by it.

Volkswagen says it has already received more than 20,000 orders for its electric ID. Buzz model. This number exceeds the announced production capacity of 15,...