Mercedes-Benz today detailed the host of tech changes coming to its flagship sedan for 2022. The Mercedes-Benz S-Class will thus be safer and more sophisticated than ever.

How so? Under the banner of what the company calls “Innovation by Intelligence”, the car has simply gotten smarter. That starts with E-Active Body Control suspension, which has nothing to do with deodorant but instead promises to make the ride optimally comfortable. The system uses active dampers connected hydraulically to a motor to adjust damping forces and ride height as needed to smooth out the road and to eliminate roll. 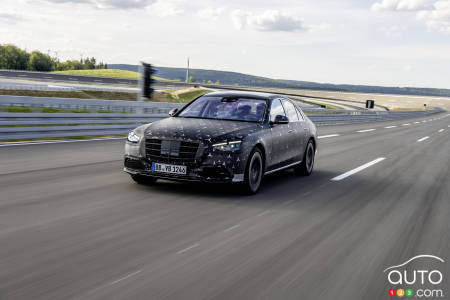 The level of effort the system puts into maximizing comfort depends on the drive mode selected. It employs no fewer than five processors and more than 20 sensors to do its thing, plus a stereo camera. Among the tricks it performs, it will anticipate bumps – even tiny imperfections as small as 2 mm - up ahead that the vehicle has yet to run over and adjust accordingly. As well, when in Curve mode it has the vehicle lean into corners for a more stable ride.

The same system also serves to enhance side impact safety, according to Mercedes. Radar sensors mounted on the vehicle’s sides can sense an imminent collision and quickly (in just 1/10th of a second) raise the vehicle by 80 mm, lowering the point of contact to a stronger section of the vehicle, the side-sill. 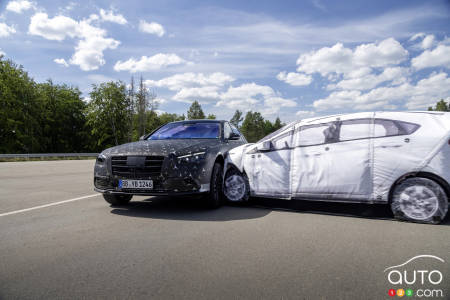 Passenger safety is further enhanced by the presence of a new centre airbag, which in the event of an impact deploys in the space between the driver and front passenger - essentially to protect those two occupants from each other. In addition, the S-Class will benefit from the world’s first frontal airbag system designed for the rear row.

Note that the E-Active Body Control suspension will not be standard equipment, but rather an option.

Four-wheel steering
The 2020 S-Class sedan will be equipped with a 4-wheel steering system that uses a 48-volt battery and adjusts according to speed and steering angle. Slower speeds mean the rear wheels turn in the opposite direction to the front ones, while at higher speeds they all turn in the same direction for better stability and turn-in response when changing lanes. Perhaps the niftiest part of this system, however, is that during parking manoeuvres, the turning circle is reduced by two metres. Basically that makes the S-Class as manoeuvrable as the C-Class compact. 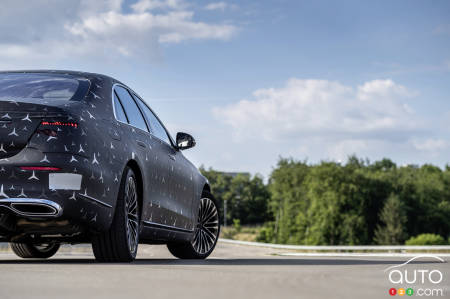 Otherwise, the MBUX infotainment system has been updated, and now includes an improved exit warning feature which senses when a hand nears a door handle and emits visual and sound warnings if there are obstructions outside.

Also coming to the 2022 edition of the S-Class is a 360-degree, 3D camera view of the vehicle’s surroundings. It used four separate cameras to create a composite image, displayed on the central screen. The image can be rotated by the user, and zooming in is possible as well. 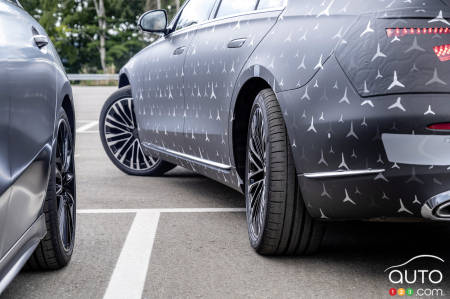 If using the all-around image doesn’t do the trick for you, you can always turn to the self-parking function. Previously that system used other cars to situate itself, but now it relies on lines marked on the pavement to enter a parking spot. Distracted parkers will be glad to know the system brakes automatically when detecting a pedestrian or other vehicle that’s in the way.

Coming to an affordable car near you
As we so often see, the luxury brands are the ones taking the lead in creating innovative new technologies designed to enhance both safety and comfort in a vehicle. But though these vehicles are not within everyone’s budget, know that a lot of these exciting new technologies will find their way into mass-market vehicles within 10, maybe even 5 years. 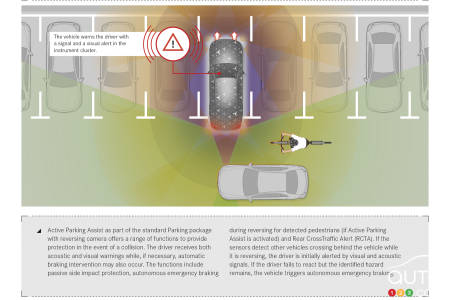 Mercedes-Benz has made a number of revisions for its sixth-generation new 2022 C-Class, but the most notable change can be found under the hood. There buyers...

E-Class and S-Class step up safety with advanced features...

With a dozen new or revised systems, Mercedes-Benz will be enhancing their passenger car safety even further for 2009. With a focus on avoiding accidents and...