Last week ended with leaked images of the 2022 Toyota Tundra circulating online. Those compelled the automaker to share an official image of the truck’s exterior, the cat being out of the bag and all.

Today, to keep the ball rolling and to ensure folks like us keep talking about the model before its big unveiling, Toyota shared another image, this time showing a glimpse of what's inside.

The new photo released by the automaker doesn't reveal all that much much, other than the fact that we can see a red stripe down the centre of the steering wheel, as well as a rather massive multimedia screen atop the centre console. The finish seems to be that of a more upscale model, and we noted speakers sitting at the base of the A-pillars. As for the rearview mirror, the fact that we can't see anything leads us to believe that it will be a traditional type of mirror, but also one with a digital display; of course, we’re merely guessing here.

But guessing is all we can do, given that the image shows more of the road ahead than the interior of the vehicle.

Stay tuned though for the official reveal of the next Tundra, coming to your screen soon - though we’re still sure exactly sure when, as Toyota has still to confirm a date. 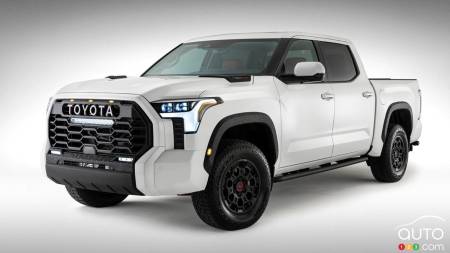