San Antonio, TX – I can think of a few things Toyota could teach other manufacturers. One of them is the art of the never-ending striptease. It's been more than a year since speculation and official bits of news have been dribbling out about the new edition of the Tundra truck. This past spring, for example, the automaker released a handful of photos that didn't reveal much except bits of bodywork. A short video followed that didn't tell us much more than that the poor director had to shoot the thing on the very day when thick fog rolled into the studio. What bad luck...

Extended foreplay
Then someone unleashed a photo online showing the full-size pickup in its entirety. Was it really an accidental leak or something more calculated? Depends on how cynical you are.

In early September, Canadian media were invited to a corner of rural Ontario to meet the 2022 Tundra.

But only meet it. We got to see it, touch it, sit in it, take pictures of it, and ask questions of the experts there. But we didn't get to drive it. Don’t get impatient. Just keep writing about the Tundra, you jourmalists. Whip the cream.

Which we obediently did. I invite you to check out the excellent piece by colleague Vincent Aubé, which presented the new truck in great detail, from its super-macho look to its engine and the choice of cabs and bodies. With that, we knew almost everything about Toyota’s Tonka for adults, except for anything about its handling on the road. To find that out, we had to wait another month, and travel to San Antonio, Texas.

Why the Lone Star state? So we could convince Texans to get with the program in the fight against Covid-19?  To protest the anti-abortion law that Republican legislators have imposed on women?

No. San Antonio is actually home to the Toyota Motor Manufacturing Texas plant that assembles the Tundra (and the Sequoia starting in 2022, when Tacoma production moves to Mexico). The Japanese automaker realized long ago that if it wanted to have even a remote chance of competing with the F-150s, Rams and Silverado/Sierras of the world, it had to build its half-ton truck in a region where the Marlboro Man is still king.

The plant is currently building the last of the 2021 Tundras while new state-of-the-art hardware is installed to build and ship the first 2022s to North American showrooms in December.

And what will the truck cost when it does arrive? Uh huh, can’t know that yet. Later. The wait is over
Production proper may not have started yet, but the crafty folks in charge of putting together our little Texan launch event nonetheless managed to snag a couple of dozen pre-production trucks, which we put to the test under a blazing sun.

After this lengthy introduction (in keeping with the Toyota way, of course), I won't repeat everything you've already read about the third-generation Tundra. Let’s just hit the road.

3.5L i-Force twin-turbo V6 and 10-speed automatic transmission
This new powertrain won’t make you miss the aging V8/6-speed tandem for a second. Acceleration is immediate and linear, the transmission doesn't hesitate and the overall sound is stimulating. Toyota didn't have any official fuel consumption figures to share with us yet, but they estimate the base V6 could manage an average of 9.0L/100 km, which would be a huge improvement over the old 17.0L rating. To say the least.

Plus an electric motor
The hybrid powertrain uses the same combustion engine, though it’s now called i-Force MAX, and mimicking the F-150's it delivers considerably more horsepower (437 instead of 389) and more torque (583 lb-ft instead of 479). Plus, when the electric motor kicks in, roll down the window. You'll notice a strange phenomenon when you accelerate: from outside you can't hear anything, but inside the cabin, thank to the work of the clever engineers, you hear a sound reminiscent of a V8.

Note that this hybrid engine variant will not be on sale until next March. Our crystal ball predicts that its popularity will eventually overtake that of the model with “regular” powertrain. The cabs
Toyota offers the same choice between Double Cab or CrewMax, the latter being more generous in the back, and carries over the rear window (glass) that can be removed with a button.

The beds
You still get three lengths (5.5, 6.5 or 8.1 feet), but this time you can marry the 6.5 to the CrewMax, which was impossible before. Each body comes standard with a coating that protects it from hard knocks and rust. Plus lashing lugs, a rail system and a plethora of accessories.

Loading and Towing
Payload (the maximum weight you can carry before the truck says whoah) is 1,940 lb, which compares favorably to the competition. Toyota makes much of the 12,000-lb maximum towing capacity, but the rule of thumb is: the less weight your Tundra has, the more it can tow. As a result, the base SR rear-wheel drive model (the only 4x2 in the Canadian lineup) is the strongest. In Texas, I pulled a 16-foot trailer, then a 26-foot trailer. By engaging the suggested driving modes, it was a breeze both times.

The rear suspension
This is possibly the star improvement of this third-generation Tundra. Multiple arms and coil springs have replaced the old sprung leaf springs, so the truck no longer feels like a trampoline. The steering is also more stable. Huge difference. And it's about time. Since Ram proved that you can drive around a construction site and still feel like you're sitting in a La-Z-boy, Toyota had an obligation to do at least as well. It adds another layer by offering adaptive shocks and a rear air suspension to level out the ride according to the loads to be carried. 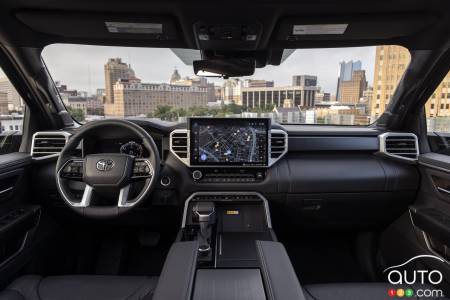 The interior
There's a lot of dark plastic in the new Tundra, even in an upscale version like the Platinum. On the other hand, it looks smooth and tidy. It will be easy to clean. if you choose the 1794 trim (named for the year when the first ranch was founded at the current location of the factory) you get upholstery and and interior that wouldn't look out of place Clint Eastwood's living room. The TRD Pro, meanwhile, comes with sharp red seats.

The screens
Here too, it’s night and day compared to the previous generation. All the new Tundra trims set out to impress you.  Start the engine, and the 12.3-inch TFT screen behind the steering wheel (on luxury models) displays an image of a U.S. national park (trucks sold in Canada won't show any of our beautiful national parks, alas). The centre screen on the dash starts at 8 inches and can be increased to 14 as an option. This alone modernizes the Tundra with a wave of the magic wand.

Still, there are buttons
Despite the presence of those screens, you'll have several buttons for certain important tasks. Like the one that activates the very cool Crawl function (included with the TRD Off-Road kit): faced with a steep, rocky slope in the middle of the forest, the Tundra will climb it all by itself. Just hold the wheel and forget about the throttle. Same principle as Hill Descent Control but in reverse. New multimedia system
Some brilliant folks somewhere in Toyota’s employ have come up with an intuitive infotainment system that borders on genius. First seen in the Tundra, it features amazing voice recognition. I spoke to my truck in French (it can handle English and Spanish as well) and it understood me nine times out of 10. All conversations start with "Hey Toyota". The AI immediately asks what it can do for you. A tip: avoid unnecessarily convoluted commands. Say "SiriusXM channel 26" instead of "I'd like to listen to SiriusXM satellite radio channel 26". When I asked "Where is the nearest McDonald's?" my virtual assistant told me right away. How do I get there? It shows me the way on its beautiful screen. Honestly, hats off!

The thingy for the trailer
You've hooked up a boat to the back of your Tundra, you get to the boat ramp and the nightmare begins: how do you back up the trailer without looking like a lummox? Personally, I'd go practice in a deserted parking lot before facing the judgment of others, but Toyota gave us a lifeline. It's called Straight Path Assist. Once the thing is activated, all you have to do is modulate the throttle while the system controls the steering wheel. Your boat will then move backwards to where you want it.

That said, be careful: you must first align the trailer in the right direction. In other words, the system will straighten the truck but not the trailer. Also, it takes some time to calibrate itself, to decode its environment. So it's not perfect yet, but they’re getting close. I would still continue to practice if I were you... 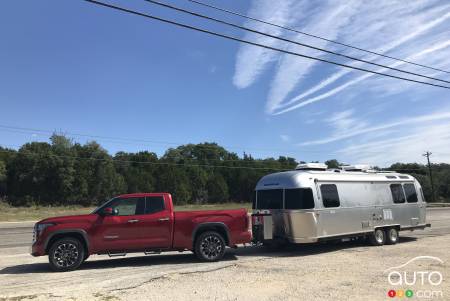 I have to stop here, without dwelling on the details of the 2.5 version of Toyota Safety Sense, a suite of driving aids that comes standard on all models, or the vibrant body colours, or the sturdy ladder chassis extracted from the automaker’s new universal platform.

Is the 2022 Tundra better than its predecessor? Of course it is. It would have been extremely humiliating if it wasn't: the creators of this truck had 14 years to perfect it! Just imagine if they hadn’t managed to make the new better than the old…

Here’s a last little anecdote for you: when I was leaving the hotel in San Antonio, I ordered an Uber. Guess which vehicle showed up? A 2018 Tundra! After explaining to the driver this extraordinary coincidence given my mission in coming to the city, I asked him, “You're a Texan, your streets are overrun with trucks, and you chose a Tundra. Why?”

His answer: “For its reliability.” 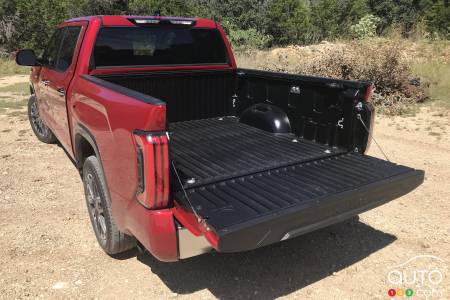 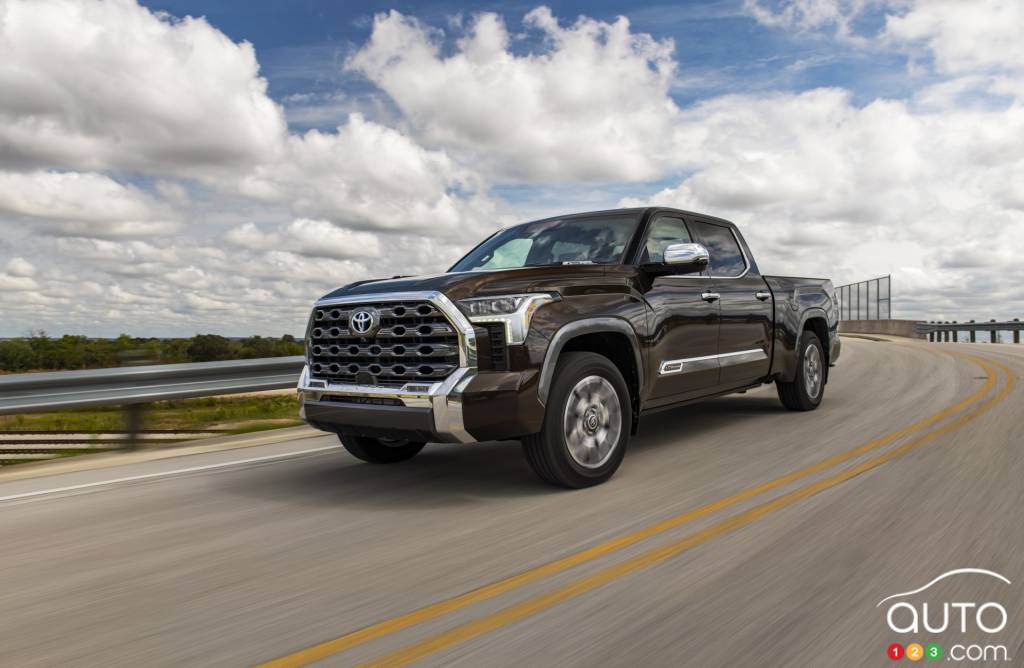 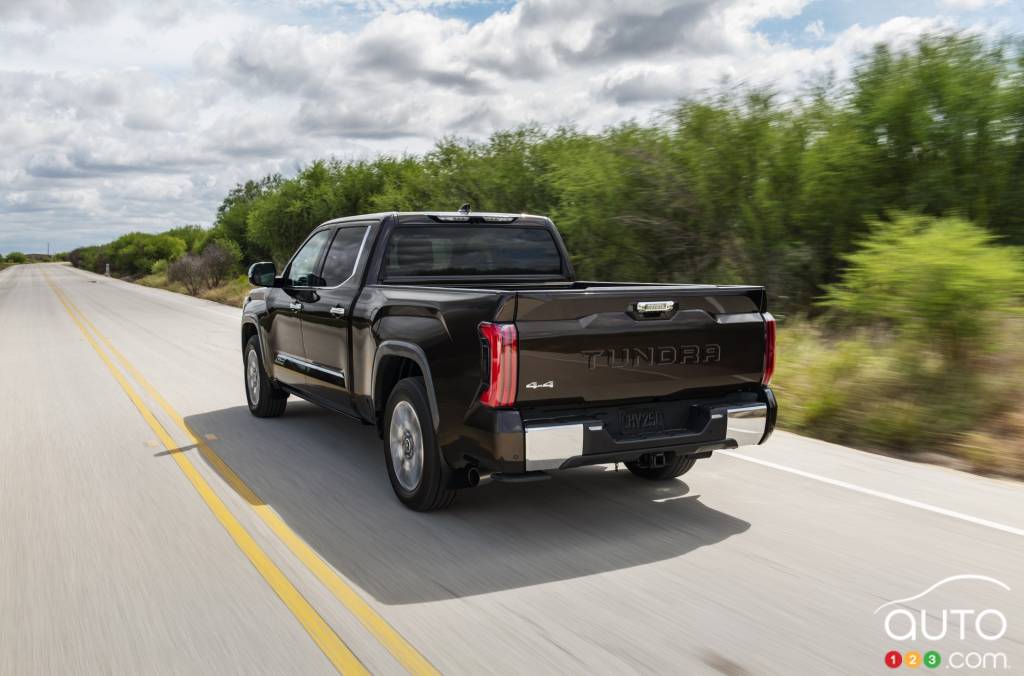 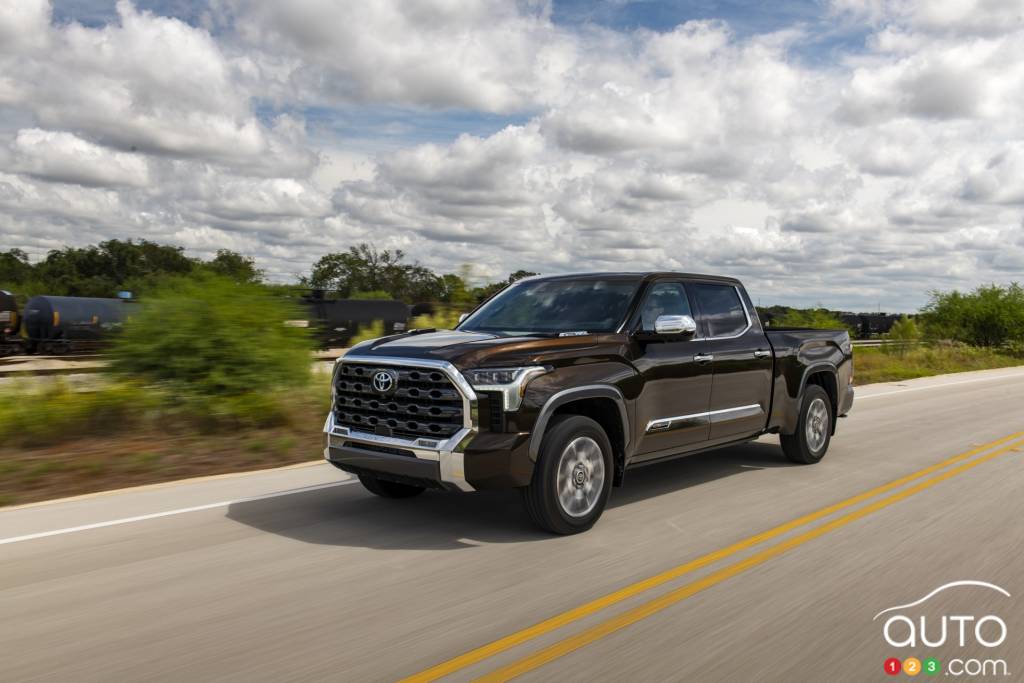 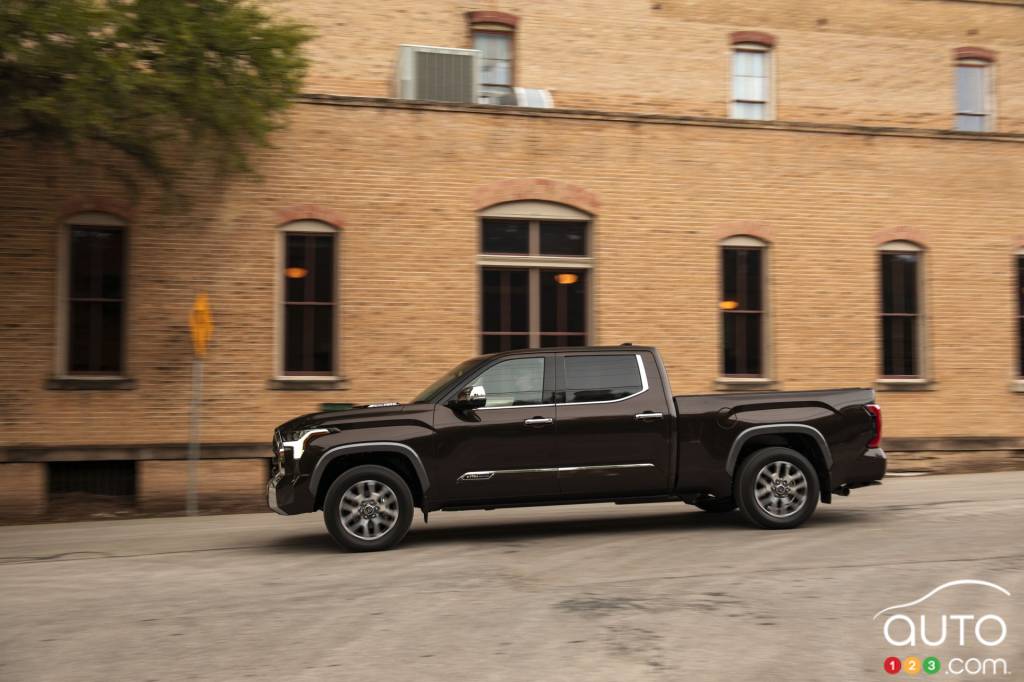