Ford’s F-150 pickups are highly touted for their capabilities and wide-ranging accessories and options. Sometimes overlooked is that the most rugged F-Series trucks, those earmarked Super Duty, are also available with features that often stretch the imagination.

When Ford invitd automotive journalists to attend the unveiling of the new Mustang at the Detroit Auto Show earlier this month, the automaker also set aside a few hours privately to show the 2023 Super Duty lineup in advance. These completely redesigned trucks come with pages of new accessories with even more impressive specifications.

Subtle visual changes
At first glance, you could assume these 2023 Super Duty trucks are little changed from before. However, a comparison with the outgoing models shows that the entire body has been redesigned.

What's more, Ford has once again included a host of new leisure and work accessories to this range of trucks. There are essential tools, yes, but also recreational aids, and more so than ever.

Recall that Ford introduced the Super Duty line in 1999 as a distinctive product, meaning that these trucks were completely different from the regular F-150s. The trucks identified from F-250 to F-550 (and also in commercial versions F-600, F-650 and F-750) have their own chassis and especially their own body.

The Super Duty available in “passenger” versions (as they are also available in chassis-cab versions) come with either a regular or extended cab, or in a four-door Super Crew configuration with a 6.75- or 8-foot body.

The trims and variants are numerous starting with the basic XL and XLT. There are the Lariat, King Ranch, Platinum and Limited luxury versions, and the Tremor sport option for serious off-roading offered with the King Ranch and Platinum to compete with the Ram 2500 Power Wagon and GMC 2500 AT4.

The new design of the 2023 Super Duty will be recognizable by one of seven possible grilles, each designed to better ventilate the mechanics. All are framed by "C" shaped lighting with the option of LED headlights available with all finishes. The large side openings are designed to reduce pressure under the hood for improved aerodynamics.

As for the Tremor, these F-250s and F-350s (RWD) come out of the factory with a unique raised suspension and 35-inch Goodyear tires on 18-inch wheels with four-wheel drive on command modes. There's also a new Trail Turn Assist option that can lock either rear wheel for tight cornering manoeuvres.

Inside
The Super Duty's interior is largely inspired by that of the F-150’s more-luxurious trims. The base XL version has an 8-inch infotainment screen that expands to 12 inches with the higher trims. The 12-inch dashboard instrumentation is customizable to the user's liking, and there are four USB outlets and optional wireless charging pads.

The optional Max Recline seats can be folded completely flat in the four-door cabs. Music lovers can order an 8-speaker Bang & Olufsen sound system or an 18-speaker, 1080-watt version.

Even more advanced mechanics
Safe to say, Ford Super Duty buyers are looking for a robust powertrain, and here's what the brand has for them in 2023.

First, Ford is adding a new V8 engine as standard this year. It's 6.8 litres instead of the previous 6.2, but it offers more torque at very low RPMs for steeper roads and highway on-ramps (power output will be announced later). Most importantly, it should be more fuel-efficient, according to Ford.

The more powerful 7.3L V8 remains in the lineup with, according to the brand's engineers, better intake capacity and improved efficiency.

Of course, the popular 6.7L Power Stroke turbodiesel V8 is still in the lineup (with longer oil change intervals). But an all-new, more powerful version of this engine also offered; it includes a unique turbocharger, revised exhaust manifolds and revised efficiency for more power (also to be announced later).

The only transmission now available is a 10-speed TorqShift automatic specifically designed for the Super Duty pickups. Trucks ordered in chassis cab format have a power take-off (PTO) added as standard equipment for operation of work attachments such as cranes and snow plows.

Four-wheel drive on command will come standard on the base XLT model.

Accessories for RVers and for towing
Super Duty buyers want substantial cargo and especially towing capabilities. While Ford didn't reveal everything about towing capacities for the 2023 Super Duty, they did assure us they'll exceed the 24,200 lb (with hitch) to 37,000 lb (with gooseneck hitch in chassis) capacities of outgoing models.

Otherwise, the accessories and related technologies are big selling points as well. For example, buyers can order scales that can calculate the exact weight of loads in the bed (about 7,850 lb in the heaviest F-450 versions) and display them on a FordPass app on the infotainment screen or in visual indicators built into the taillights.

They can also choose the 360-degree trailer camera system or, better yet, a blind spot information system for fifth wheel or gooseneck equipped pickups that can be attached to the trailer.

Another technical innovation is that the reverse camera can operate even when the bed panel is down. Don't forget that Ford F drivers can also back up and align the pickup's hitch with the trailer using the Pro Trailer Assist system.

Want more? Ford's on-board technology allows the driver to determine which routes to take to avoid obstacles such as low bridges and tight turns based on the size of the trailer.

Of course, the cruise control is equipped with an adaptive function and keeps the vehicle centered in its lane.

Still on the subject of safety, the FordPass app can detect if someone with sticky fingers tries to disconnect the trailer when the truck is stopped and locked. The detection system can also alert the driver if there’s an obstacle in front of or behind the vehicle. It can even make the truck brake. And, finally, the head-up display is available to better draw the driver's attention to their speed.

Finally, don't forget that the Ford Super Duty trucks can be equipped with the Pro Power Onboard system with 2.0 kW of electricity available through power outlets in the bed.

Pricing won’t be announced until the earl-2023 launch of the Super Duty approaches. The trucks will be assembled at the Ford Kentucky Truck Plant in Louisville, Kentucky and at the Ohio Assembly Plant in Avon Lake, Ohio. 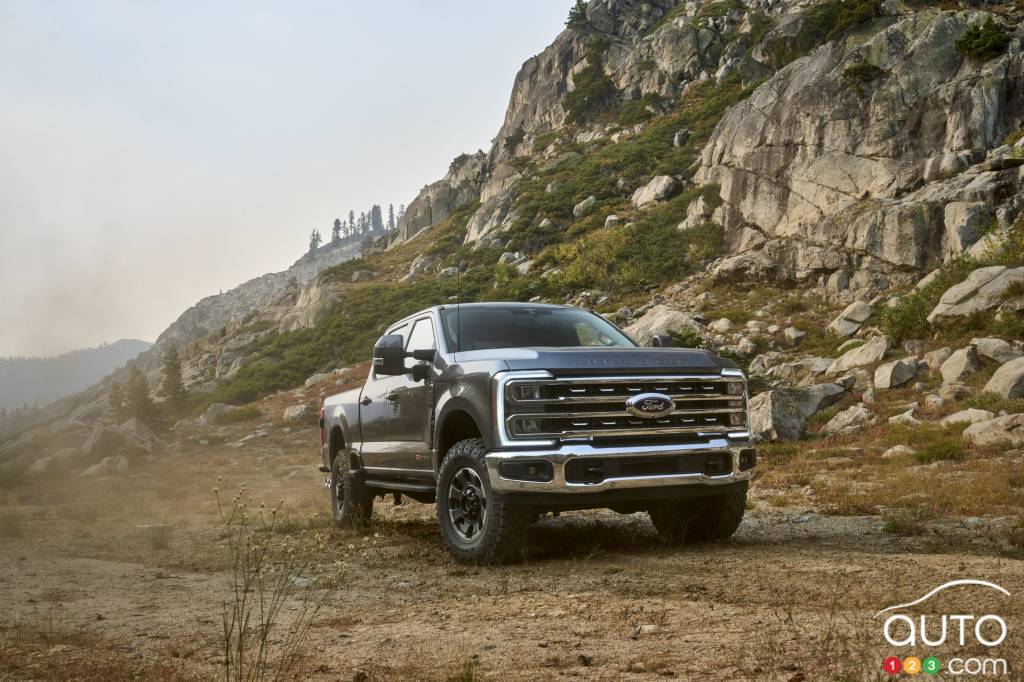 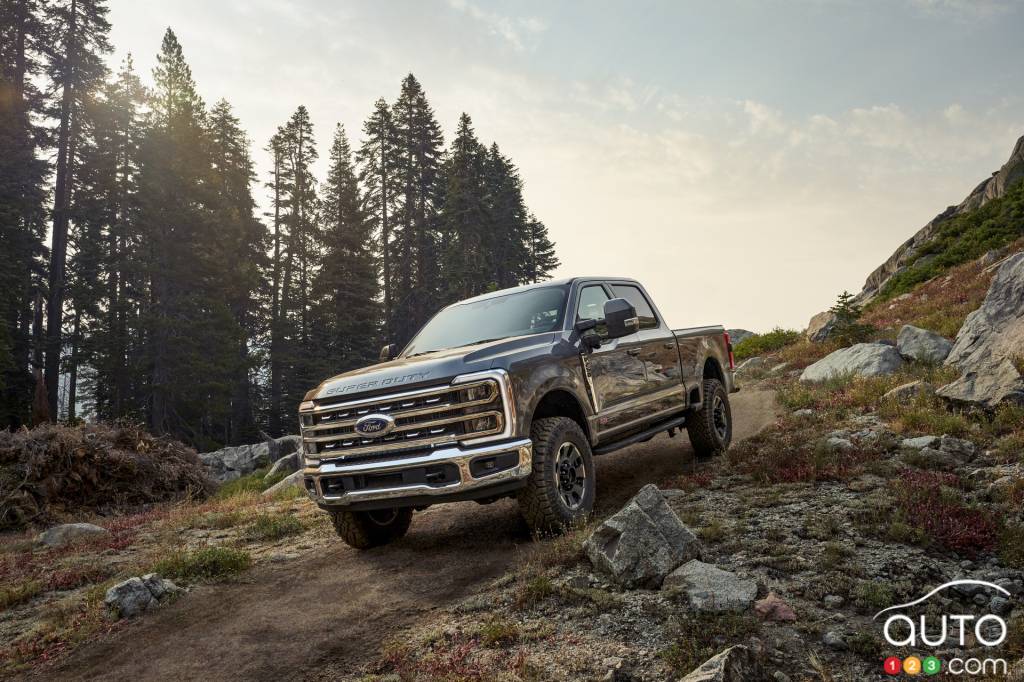 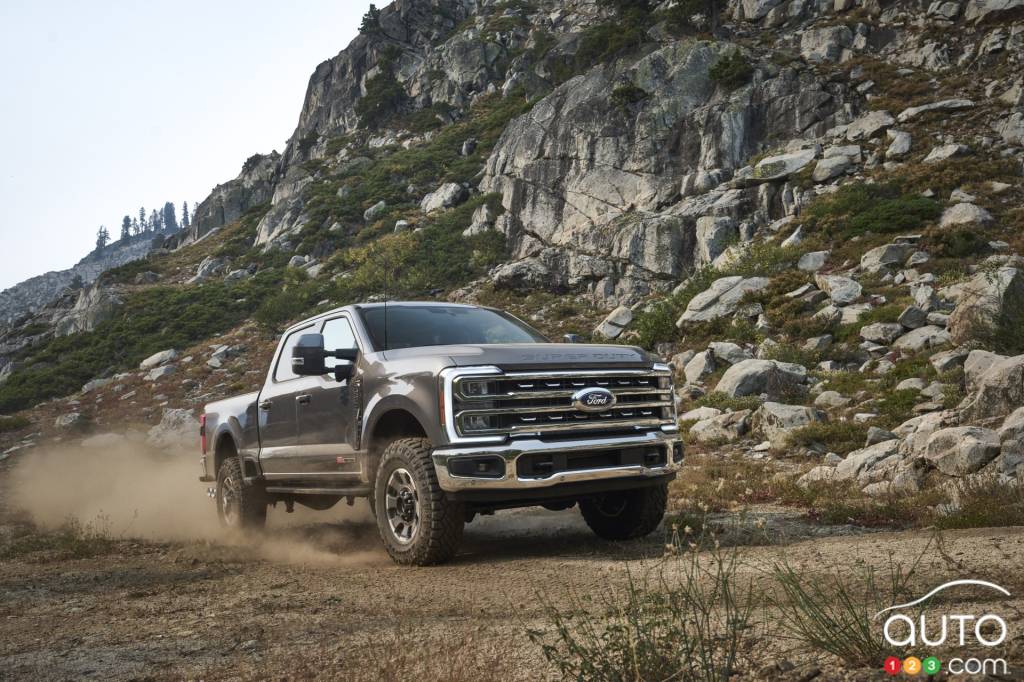 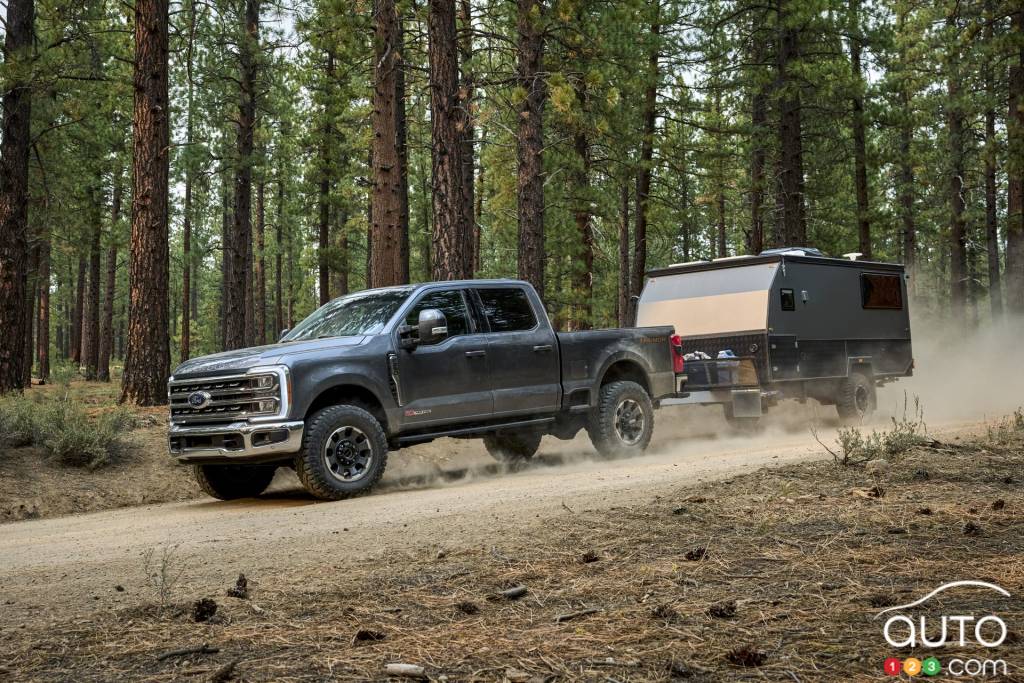 Ford has announced the towing capabilities of its Super Duty pickup line for 2023. One number that definitely sticks out id the maximal 40,000-lb capacity fo...