The Honda CR-V may be Honda's most popular SUV, but the larger Pilot is still a cornerstone model of the lineup. It's been serving families looking for space, capability and reliability for 20 years now.

The current generation of the model was introduced in 2016, making the Pilot is one of the oldest members of the present Honda lineup.

For 2023, we will finally get the next generation of the model. With a new HR-V and CR-V arriving this year, and the Pilot next year, all of a sudden the Honda SUV lineup will be very current as of 2023.

In anticipation of the 2023 Pilot's debut, Honda is dutifully setting the stage, this time with an image showing a TrailSport version from some distance away against the backdrop of a rocky landscape of the kind found in Arizona. The photo shows a Pilot looking downright puny in a vast space, but clearly dressed in its new camouflage suit.

All in all, we don't see much. Still, it's an opportunity to remind folks the model is about to change.

And what can we expect? Mostly continuity, as is often the case with Honda. We can anticipate a design resembling that of the CR-V. Mechanically, the 3.5L V6 should be back, perhaps in an improved form derived from the engine used in Acura MDX. Can we expect other options on the menu, namely some form of electrified powertrain? We can hope so, but it’s probably wise not to hold our breath.

What outdoors enthusiasts will be hoping for is that the TrailSport version delivers to the model a little more in the way of off-road capabilities. What we’ve seen up to now in TrailSport variants is mostly cosmetic enhancements, but there’s hope it will be meatier in the case of the Pilot.

That of course remains pure speculation, as no information has been released so far. On the other hand, given this new confirmation that the 2023 Pilot is indeed the works, we'll have our ears to the ground about it in the coming weeks and months. We can expect a presentation this fall, perhaps at the Los Angeles Auto Show. 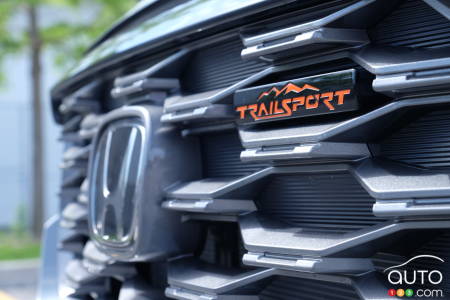 Via a few partial-view images and some camo shots of the vehicle in testing, Honda has teased the new TrailSport edition of the upcoming next-generation Pilo...

Honda has shared a few images of the revised 2023 HR-V’s interior, though there are corners that remain off-limits for now. The piece-by-piece unveiling cont...