•    Images of a redesigned Buick Encore GX have appeared on a Chinese website.

•    The model shows a design inspired by the Electra-X concept.

It's no secret that Buick is now more active in China than anywhere else in the world. In fact, if it weren't for the Chinese market, the brand would have disappeared when General Motors (GM) was reorganized at the end of the 2000s.

It’s no surprise then that Buick often unveils models in China long before they are presented here. Sometimes those models remain exclusive to the Chinese market, but sometimes they don’t. Sometimes we get a sneak preview of models coming to North America.

That may be what's happening with the two models images of which appeared online last week. Those images were posted n the website of the Chinese Ministry of Industry and Information Technology (MIIT), and they show two future Buick models. New vehicles launched in China must go through MIIT for inspection, which includes taking pictures. These photos are sometimes published online before the carmaker even unveils them. 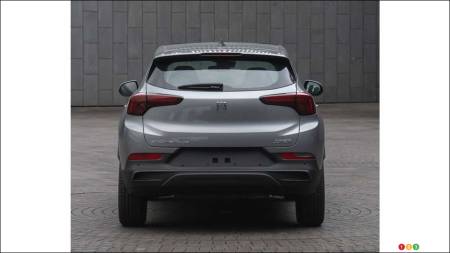 One image is of a redesigned Buick Encore GX. It shows us a model with a revised front end, and it also show a model with lines are strongly inspired by the Electra-X concept. This tells us something about the direction Buick plans to take with the design of its future models.

The Chinese Encore GX also features the brand's new simplified logo, placed in front of the hood, between the daytime running lights. The regular headlights are housed in the false air vents, a growing styling trend among automakers. The rear end looks unchanged from the current version. Note that this is a refresh and not a new generation, which would have entailed new styling from start to finish.

Also of interest, another model has appeared, the Electra E5 electric SUV. Its design is also inspired by the Electra-X. Of course, its grille doesn't include large air intakes for an engine, which makes it easy to tell the two models apart at first glance.

What we don't know is if this Buick electric SUV will eventually be offered in North America. We know that the company has reserved the names Electra E1 to E9 for our market, which means we could be looking here at the future Buick Electra E5. It’s all speculation for now, because Buick hasn’T confirmed anything; it is possible that our electric models will be different from those that will be offered in China.

Buick has said it plans to introduce a first electric vehicle in North America in 2024, and to have an all-electric lineup by 2030. The first model to come should take a format similar to that of the Cadillac Lyriq and it will be based on GM's Ultium platform.

The Current Encore GX launched in our market in 2020. On Buick's website, the 2023 model is still the same, which suggests that the vehicle seen in China would be a 2024 version.

Of course, all this has yet to be confirmed, but we now have something more concrete to watch out for. 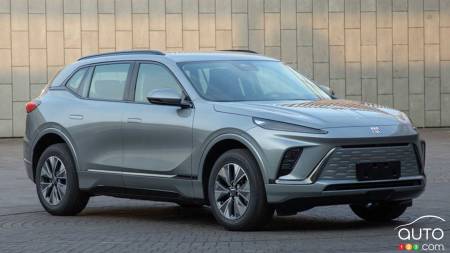 The Next Maserati Quattroporte Will Be All-Electric in 2024

Rumour has it that the Maserati Quattroporte sedan will leave the gas engine behind and become an all-electric model when it’s renewed in 2024. It's all part...

The Buick Envista making its debut in China shows us the new global design language the brand intends to use. We can therefore imagine future Buick products ...