The electric SUV will be positioned below the C40 Recharge and XC40 Recharge in the Volvo lineup Automotive columnist: Daniel Rufiange , Updated: 2023-01-23 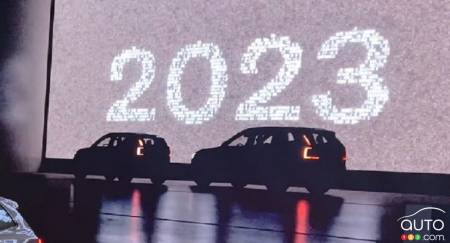 •    This subcompact model will be sit below the C40 Recharge and XC40 Recharge in Volvo’s lineup.

•    We don’t know yet if the Volvo EX30 will be offered in North America.

When Volvo unveiled the 2024 EX90 back in November, there was a conspicuous second model in a darkened image shown at the event. It didn’t reveal much, except to suggest that a smaller model was in the works. Volvo had nothing concrete to say about the identity of that model at the time.

Last month, its name (EX30) was spouted publicly by Volvo CEO Jim Rowan. Now we know when it will be presented: on or around June 15. The electric subcompact SUV will be positioned under the C40 Recharge and XC40 Recharge models in the range and go by the name EX30.

The Volvo EX30 will be built in China and sales of the model will begin before the end of 2023. What is not known at the moment is whether Volvo plans to offer it in North America.

Considering its sub-compact format, it’s far from sure it will, but it's not out of the question.

This new SUV is clearly designed to attract younger buyers to Volvo. There’s talk it could become the brand's best seller. And frankly, if Volvo wants to rejuvenate its clientele on this side of the Atlantic, it will need new dynamic vehicles like the EX30.

We can also guess that this entry-level model will be the brand's least expensive vehicle on offer. The company wants to grow its sales significantly and will have to do so in a big way. Volvo sold 615,121 vehicles in 2022. It wants to see that number grow to 1.2 million by 2025, half of which will be all-electric.

The EX30 is expected to be based on the SEA modular platform from Geely, Volvo's parent company. This structure offers an 800-volt architecture, which suggests very fast charging times.

We'll get back to you when we know whether or not this vehicle will cross the Atlantic to reach us.

2024 Audi Q8 e-tron: The e-tron Gets Revised and Retagged

Subaru will present the third generation of its Crosstrek at the upcoming Chicago Auto Show. The only real questions that remain are what the company has in ...